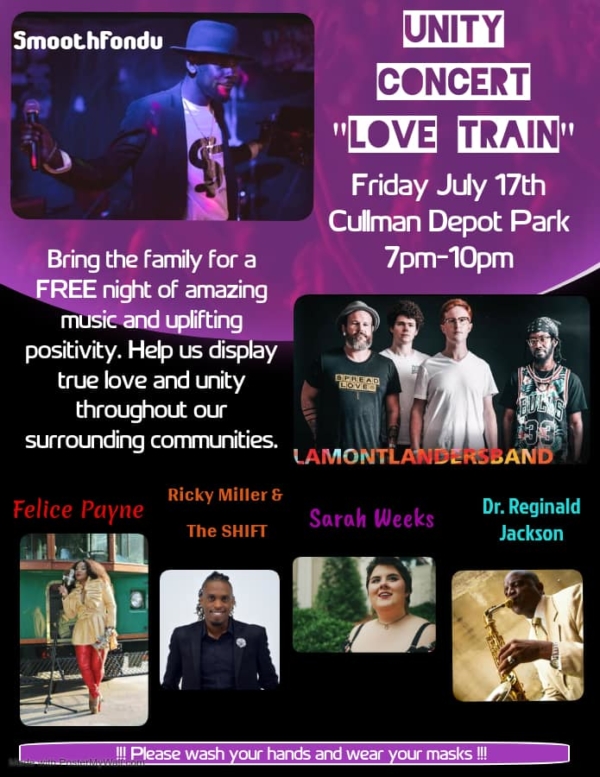 CULLMAN, Ala. – Depot Park will be the setting for the “LOVE TRAIN” Unity Concert tonight, hosted by local artists Terrell Jones’ Smoothfondu and the Lamont Landers Band. The free event starts at 7 p.m. and goes til 10 and will also feature artists Ricky Miller and the Shift, Sarah Weeks and Dr. Reginald Jackson of The University of Alabama.

“Plain and simple: love and unity (are) what I’m trying to implement,” Jones said about the reason for the concert. “It’s what I’m trying to get people to recognize, that we need more of that in this world. It’s a twisted world; we need it. My goal is if I can just get one individual to open their mind and heart, to change in that direction, then I’ve done my job.”

Of his inspiration for the event, he said, “That is simple as well. We had a lot of the protests in light of George Floyd and a lot of other incidents that were happening. I had a lot of phone calls from good friends of mine that are Caucasian and they would call, FaceTime and were literally in tears. I had a good friend of mine from, he’s coming from Colorado, he’s literally family, he’s going to come and be a speaker. He called me and I could literally feel the pain in his voice about everything that’s going on. Him, along with other people I saw face-to-face on FaceTime, just in tears, they’re sorry and this and that and how can they help and I really felt bad for how they felt because it’s not their fault with what’s going on in these other places. It hit me in the heart, so to speak, and I want to say that God really put this in my heart to do. The more and more I thought about a musical protest, so to speak, the more I heard the voice say, ‘Do it, just go ahead and do it,’ so I started planning. It started off as a small idea of just me and my band getting together and we’ll just do a little concert and it just quickly turned into something bigger than what I thought it would be.”

Jones continued, “I’m a native of Decatur; I actually live in Cullman now. I tried to go to Decatur first (to host the concert) because it’s my hometown and they shot me down. When I went to Cullman it was pretty open.”

Addressing social distancing and COVID-19 concerns, he said, “We are asking that everyone please wear a mask and have hand sanitizer on deck. Of course, we can’t control who’s going to do what, but we’re asking everyone to do that. Just because it’s outside doesn’t mean that there’s not a threat there; I want everyone to be safe.”