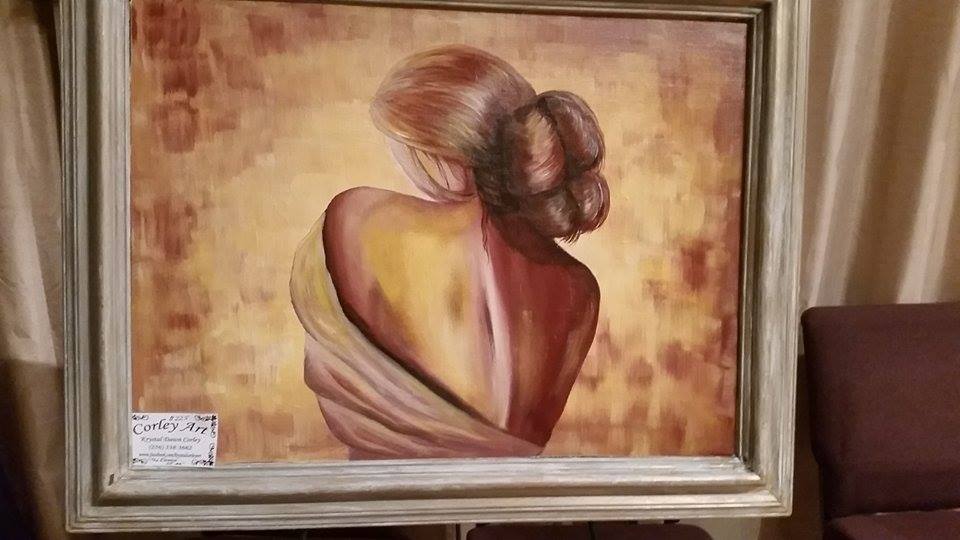 CULLMAN – On a brisk fall evening, dozens of people gathered in the shop of Michael’s Flowers and Design for a night of unique art and great wine. A beautiful display of art by one of Cullman’s most talented painters, Krystal Corley, adorned the lavish back room for all to enjoy.

“I moved to Cullman back in 2009,” said Corley. “I started painting after that and it was just something that clicked immediately. Anything artistic or crafty I am up for.”

Corley has always been an artistic person, and started as a young child drawing. She now has moved exclusively to painting, which she can attribute in part to her father.

“My father was an artist,” she said. “He paints with acrylic and oil, but has moved to a lot of wood carving and sculpture. He studied at the University of Alabama and has multiple degrees; he could actually teach if he wanted to. My parents were divorced, but he taught me a lot, and I was always impressed with some new work every time I saw him.”

Corley’s work is impressive to say the least. Her use of colors and shadow really bring a distinct dimension to her work. The largest piece on display was a grouping of several paintings in one and was a representation of the seven deadly sins.

“I have had the most fun with this piece,” said Corley. “There are a lot of different interpretations you can draw from it. I just loved working on it. It started with a picture my sister took five years ago when we were playing with our children in a pool. We were taking pictures and she got this one picture of me that I just thought was really cool. I had the idea for seven deadly sins, and I just thought that picture was perfect for sloth, and it took off from there.”

Another brilliant painting was entitled “Essence of Me” which shows a woman facing away, her back bare, hugging herself. The color palette used for the piece really gave an ethereal feel and delivered a breathtaking painting.

Michael Sapp, marketing director for Michael’s Flowers and Design, said that they were happy to use their store to help a local artist shine.

“We were really impressed with Krystal’s artwork,” said Sapp. “We saw her on Facebook and thought it would be a good match. We were excited to help give her some exposure. She is very talented. We want to do more shows and support as much local art as possible.”

Finger foods were served, and patrons could sample several wines from the distributor for only $7.

“The distributor usually brings 4 to 6 wines for our tastings,” Sapp said. “And they vary depending on the season. So this time we might have some that are good for cooking, or go with turkey for your Thanksgiving meals.”

Everyone at the event had a marvelous time drinking wine and talking art. It was a laid back, but sophisticated evening with lots of happy patrons. With businesses like Michael’s Flowers and Design supporting and teaming up with local artists to help one another, it is truly a match made in heaven.