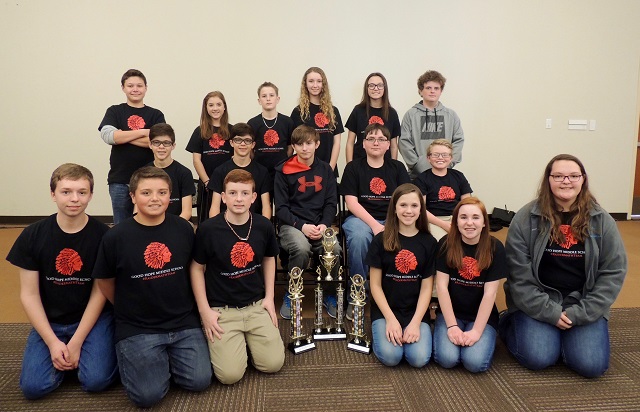 GHMS team coach Jamie Martin explained the format of the competition, “They took a 25-problem test that lasted one hour.  Four of the students from each team competed in ciphering.  Those kids had four questions each and 1.5 minutes to complete each question.  The team score is the ciphering score plus the top four written test scores from our team.”

VMS coach Scotty Cofer said of his team, “The team really worked hard over the last couple of months.  They believed they could win, and did.  Our seventh grade tied for third (lost on a tie breaker) and our sixth grade was 13 points from placing.  I’m proud of all these students that devote the time in building a successful math program.  It wouldn’t be possible without my fellow math teacher Bob Gingrich (sixth grade) and Susan Sellers (seventh grade) that work with all our students in class.  Also, Erik Runge is co-math team sponsor here at VMS.  He deserves as much credit as anyone; works kids hard and keeps them involved.  The school and parents really supported the students as they competed in all tournaments.  Special thanks to our principal Dr. Vickie Spear, and assistant principal Mr. Blake Thompson, for their support and trust in all of us in the math program.”

Of her teams, Martin said, “Both of my teams, as well as myself, were thrilled to get first place.  The county tournament is very competitive, and we knew we had a shot at winning if everyone did their best.  I am so happy that all of the kids' hard work paid off.”