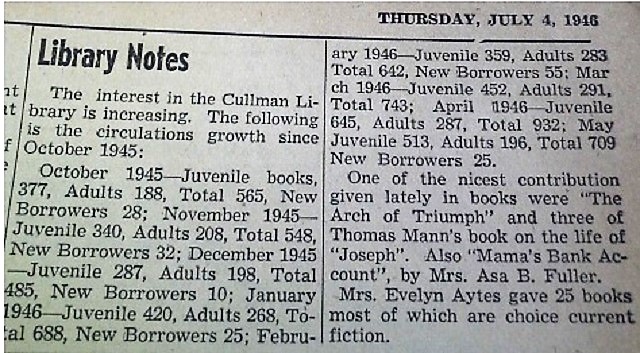 CULLMAN – The main branch of Cullman County’s public library system- located at 200 Clark St. NE- is a well-known local landmark. However, the library did not always reside at its current location- in fact, for many years, it did not have a permanent location at all. Between 1894 and 1967, the library changed locations at least six times.  Nor has Cullman’s library always enjoyed the success it does today. Throughout its long history, it has either closed or been on the verge of closing more than once.

The roots of Cullman’s public library system reach back to the late 19th century. In 1890, the founder of Cullman- Colonel J.G. Cullmann- appointed Cullman’s first library committee. The purpose of the committee was to manage a public library on the campus of the Cullman Polytechnic Institute, a college located near what is now East Elementary’s park. The leader of the committee was a professor at the Institute, S.A. Felter, and the first librarian was Marie Mohr. The library did not remain at its first location for long. Only four years later, in 1894, it moved to Allison’s Drug Store, a local drug store.

1894 is the last year Cullman’s library appears in the historical records for the 19th century. Nothing much else is known about it until 1915, when a local women’s club- the Culture Club- began supporting it.  The Culture Club was eventually able to convince the Cullman City Council to rent two rooms in the Parker Building for library space.  Unfortunately, it is not known how successful the Parker Building library was.

However, what is known is that by 1928, the Cullman library had closed. Once again, it would be a women’s club that came to the rescue. This time, it was the Coterie Club, and the rescue effort was started by a member named Bess Morrow.  Morrow was able to convince the Coterie Club- led by Mrs. Wilbur Green- to support a library in Cullman, and the club began holding fundraisers and gathering book donations. Eventually, supporting Cullman’s public library became the Coterie Club’s main project. The club’s efforts were a success, and a two-room library opened above Stiefelmeyer’s in 1928. Morrow’s involvement did not stop at fundraising- she served as the librarian between 1928 and 1930, and as a volunteer for many years after that.

The Stiefelmeyer building was not the library’s last stop. Between 1928 and 1946, it moved at least three times. The locations included the city school building (early 1930s), Cullman’s then- current City Hall building (in at least 1935) and the basement of the Fuller Building.  In the early 1930s, Cullman’s library was located in two rooms of the city school building, but by 1935, the rooms were needed by the county, and the library had to move.

Despite the relocations, Cullman’s library was still able to increase their book collection. Using part of the money granted by the city council, 40 books were added to their growing collection in February of 1935. The books could be checked out for a week, and the number of checkouts was capped at 104 books a year, or two a week.  The fee for obtaining a library card was $1, reduced to 50 cents in late February 1935. Between October 1945 and May 1946, the book collection increased substantially, by 5,312 books. The library was also visited by 175 new borrowers during this period.