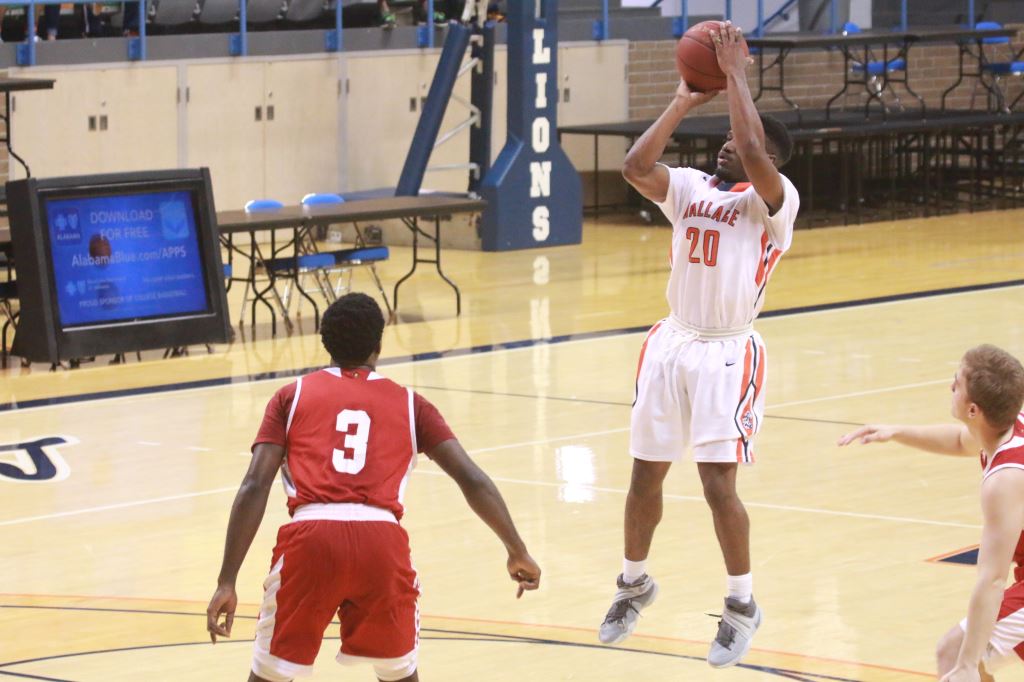 Wallace State sophomore Jaylen McCoy (20) pulls up for a jumper in the Lions’ win over Gadsden State on Monday.

The Lady Lions rolled to a 77-56 victory in Monday’s opener, extending their winning streak to six games, and the Wallace State men remained perfect at home in the conference with a 66-54 triumph.

In the women’s game, Wallace State surged out to a 16-2 lead less than four minutes into the game. Wallace State’s Taylor Hollingsworth made a pair of buckets in the closing seconds of the first quarter, giving the Lady Lions a 22-4 advantage.

Wallace State (19-6, 5-1 Alabama Community College Conference) kept the momentum rolling in the second quarter, building a 43-17 cushion by the half. The Lady Lions extended the lead to 60-36 after three periods.

“We are right where we need to be. We have one more home game before a long road stretch. I told the team to enjoy this one, think about the good and bad things they did and get ready for the next one,” said Wallace State women’s coach Ron Burdette.

Sydney Powell’s career-high 16 points led four Wallace State players in double figures. Powell, a freshman from Ramsay, entered the game averaging 3.5 points per game before her outburst off the bench.

Morgan Higgins finished with 14 points for Wallace State, Kelsey Houston had 13 points behind three 3-pointers and Taylor Hollingsworth chipped in with 12 off the bench. Joy Sadler contributed seven points.

Burdette has been pleased recently with the maturation of his freshman class.

“Gabby Hill has improved a lot. Her turnovers are way down from earlier in the season. She’s settled in after not playing much point guard in high school. Joy Sadler has come along. Taylor Hollingsworth adds a lot of energy,” Burdette said. “We’ll have to have our freshmen playing well down the stretch. I’m pleased to see them making the strides they have.”

Burdette’s team has also won nine of its last 10 games, losing only once since the calendar flipped to 2017.

Wallace State’s men notched a third straight victory at home behind Rashawn Green’s 21 points and another strong second half.

With 11 minutes to go in the second half, Wallace State put together a 17-point margin after sophomore Jaylen McCoy scored eight consecutive points. He hit a pair of 3’s and a layup on three straight possessions.

Gadsden State chipped away at its deficit a couple of times in the closing minutes. The Cardinals trimmed it to 11 points with 4:02 remaining, but Zach Allison nailed a trey for the Lions to make it a 14-point game.

Later, Gadsden State’s Jaylen Hill hit a 3-pointer with 2:20 left, getting the Cardinals within single digits. Green answered this time for Wallace State, draining a 3-pointer of his own from the right corner for a 63-52 advantage with 1:55 left.

“Gadsden State is always tough to close out. I call them Freddy Krueger because they don’t ever go away. You think they are dead in a game, and they are right back in it. Even with a minute to go, they were still playing like they were down one point. They play like that for 40 minutes and never calm down,” said

Green, a sophomore from Huntsville, has been a lift off the bench for Wallace State in recent weeks. He has scored in double digits three of the last four games, including Monday.

“I thought this was one of Rashawn’s better games on both ends. He did a good job defensively. It was definitely one of his most complete games of the season,” Meeks said.

McCoy scored 14 points for Wallace State, Allison finished with 12 and Thompson had seven.

For Gadsden State, Hill had 20 points and John Arnold added 19.

Both Wallace State teams host Lawson State on Thursday night for another ACCC doubleheader. The women’s game begins at 5:30 p.m.