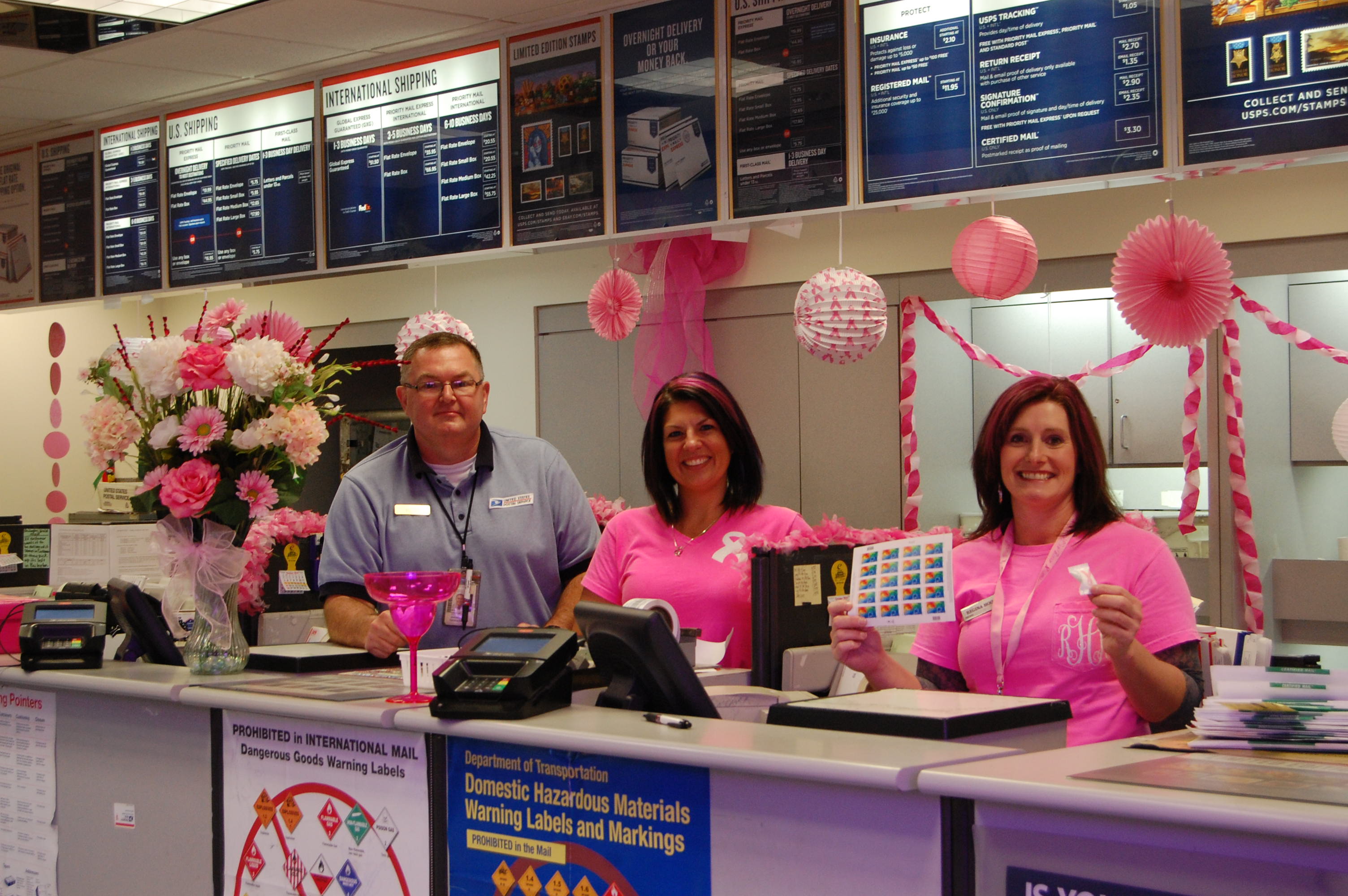 CULLMAN – On Friday, October 4, the Cullman Post Office kicked off their Annual Breast Cancer Awareness Event with the office and its employees all decked out in pink. During the month of October, every Friday is “Pink Out Friday” where all of the employees have the opportunity to wear their pink attire. There are refreshments in the lobby for customers to enjoy each Friday. Breast cancer awareness is important to the employees at the Cullman Post Office because two of their co-workers, Nancy Schnur and Joni Erb, are breast cancer survivors. As of October 21, Cullman has sold $14,652.00 in breast cancer stamps and is currently in first place in the state of Alabama.

Caressa Doss is the Postmaster at the Cullman Post Office. She and her employees decorate the office each year to support and bring awareness and education to breast cancer. “It’s fun to do,” Doss said. She added, “We keep adding and adding, and I like it to look a little elegant.” Ever since she started working at the Cullman Post Office two and a half years ago, Doss has paid for the decorations out of her personal funds. The Alabama District gave Cullman a plaque last year for having the highest breast cancer stamp sales in Alabama. The state of Alabama came in third last year in the nation and is currently in third place this year.

City Carrier Johnny Roy joined in by wearing a pink uniform shirt with matching socks and shoelaces. All decked out in pink, he walks around town delivering mail by foot. Doss said that everyone asks him about his pink mail carrier uniform and wants to take a picture with him. He is having fun for a great cause and spreading the word of breast cancer awareness all at the same time.

Doss calls the clerks in the office the “pink princesses.” One of the clerks, Regina Hood, said, “The community is very excited and is always asking questions.” The staff at the Cullman Post Office all agreed that the community plays a vital role in the success of the money raised. Supervisor Robert Strong has had to cope with his mother while she recovered from breast cancer. “She’s doing well,” he said. Robert added, “Here at the post office, if we do something, we go big.”

Doss said, “We’re motivated because the stamp proceeds go to support breast cancer which has affected several of our employees in the past.”

Employee Nancy Schnur was diagnosed with breast cancer 10 and a half years ago. “I had never had a mammogram and I’m not one to go to the doctor unless I’m actually hurting,” she said. Nancy had to undergo a mastectomy, chemotherapy and radiation treatment. She lost her hair, but said, “You just sort of embrace it.” For Halloween that year her mother made her a brown robe and she dressed as Uncle Fester from the Addams Family. Nancy is thankful to be cancer free. She said, “Every time I go to the doctor, everything is fine. I have my mammograms every year and I actually went to the doctor two days ago and everything was good.” Nancy said that while working for the post office, everyone at work was awesome. She had a great support system through her family and co-workers.

Nancy really likes the pink decorations in the office. “I love the decorations. Cullman really celebrates breast cancer awareness month more than any place I’ve ever been to,” she said. Some may be wondering why Cullman participates so heavily and what it is about the citizens that motivate them to help out. Nancy said, “I just think that people are good. They are helpful and have kind spirits.” Nancy has learned a lot about cancer and wanted to make sure that readers were aware that men can also get breast cancer. It is rare, but real.

Doss concluded by saying, “It’s just a pure joy to be out in the lobby with the customers having snacks and coffee. Everybody shares a story with us.”

This story was originally published in the October 27, 2014 print issue of CullmanSense print edition