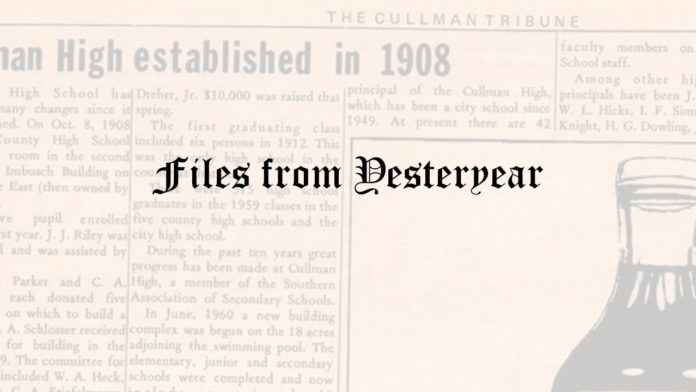 Funeral services were held on January 22nd, at the Corinth West Church, for William Frazer Looney, age 73, of Route Three, Vinemont, who died at his residence on January 20th. Surviving are his mother, Mrs. Callie Looney; one brother, Pachal Looney and several nieces and nephews.

Army Private Gerard G. Smith, whose parents, Mr. and Mrs. Artice D. Smith and wife, Patricia, live at 1303 Katherine Street, Cullman and other members of 1 Corps, took part in Exercise Snow Storm, in Korea. The week-long training maneuver was designed to test the corps’ ability to operate in Korean winter conditions and to measure the effect of extreme cold on men and equipment. Smith, a member of the corps’ 547th Engineer Company in Korea, entered the Army in May 1963, completed basic training at Fort Polk, Louisiana and arrived overseas the following October. The 23-year-old soldier attended Cullman High School.

Mr. and Mrs. Troy Young were called to the bedside of Mr. Young’s seriously ill brother, Edgar Young, on Friday.

Reverend and Mrs. Alfred Coefield were dinner guests of Mr. and Mrs. Doc Tanksley, on Sunday.

According to the United States Department of Agriculture, the average person, in India, consumes about a dime’s worth of food a day and an American eats $1.07 worth.