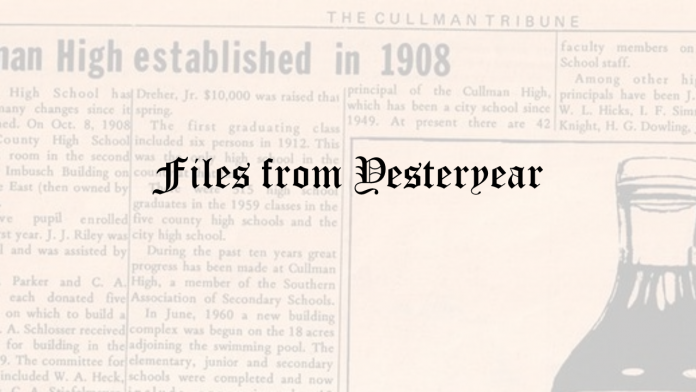 A dance was enjoyed at the Growlers Club rooms on Friday night.

Mrs. A. Dreher will entertain at the Symphony Club on November 23rd.

Claud Griffin spent the first of this week in Memphis.

In the election of November 7, 1916 in Cullman County these were elected:

The biggest graveyard is that of buried talents…I may not go so far, so fast, but I see more along the road.

The Charles D. Parker Department Store in West Cullman closed September 3, 1920. It was located four blocks west of the Cullman County Courthouse. This sale was announced with a two-page advertisement in The Cullman Tribune.

There had been so much rain the Tennessee River was swollen to flood stage.

Mr. Dave Trimble is teaching a singing school at Brushy Pond and he has a large school.

Mr. Homer Mitchell had dinner with the Bill Hancock family on Friday.

Messrs. Leldon Griffin, Marvin Kelly and Paul Burnum will re-enter the University of Alabama this fall.

Mr. and Mrs. L.R. Thompson of Mt. Vernon, Illinois were the guests of Mr. and Mrs. Alvin Peinhardt and Mrs. Agnes Vann at the end of last week.

Miss Bessie Pate was the weekend guest of Miss Pearl Tillery. They attended church at Buelah.

Mr. and Mrs. Will J. Swafford are having a nice dwelling house built.

Colony Parks and Recreation up and running