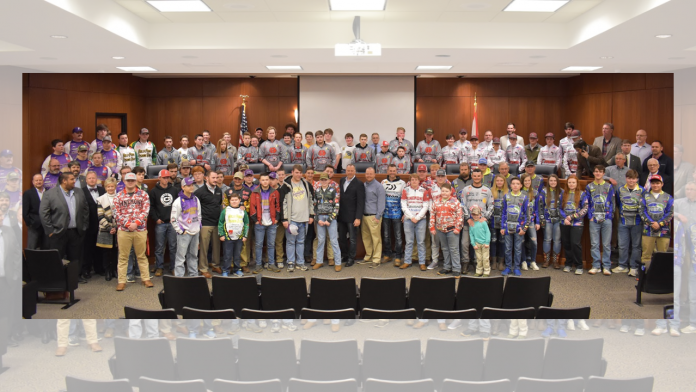 Members of area school fishing teams posed for pictures with pro fishermen and representatives of Major League Fishing, along with local officials, after Monday’s announcement. (W.C. Mann for The Cullman Tribune)

CULLMAN, Ala. – In front of a standing-room-only crowd Wednesday morning at Cullman City Hall, Major League Fishing (MLF) announced that Cullman and Smith Lake will host Stage Five of the 2019 Major League Fishing Bass Tour from Apr. 30 through May 5. The event will coincide with a “festival-style fan experience” in downtown Cullman’s Depot Park and Festhalle.

Said Jacobs, “First of all, we’re excited to partner with Major League Fishing on their new format. We think this will be a great opportunity for the citizens of Cullman to interact with some of the best anglers in the world.  We’re also looking forward to providing an outdoor entertainment experience for all the parties involved.”

Anderson added, “We’re excited about the opportunity to partner with Cullman Parks and Recreation Department and Major League Fishing to bring this prestigious fishing tournament to the community.  This tournament will bring great exposure to Smith Lake and Cullman area businesses. We’re eager to work with (MLF’s) Mr. (Michael) Mulone and his team to make this event a success.”

MLF Pro and Cullman native Jordan Lee told the crowd, “This is something I’ve always dreamed of: having a big event come to Cullman, you know, to showcase not only the town but, you know, the great fishing we have around here. This is going to be…it’s just a great experience. I think the town of Cullman’s going to get to see what Major League Fishing is all about and what it has to offer.

Hubbard said, “Major League Fishing is a world class organization with 80 of the best bass anglers in the world and I am excited to show them our great city along with beautiful Smith Lake. This is a great opportunity for all who enjoy fishing to come meet the pros.”

“We are extremely excited to announce this new partnership and adventure with Major League Fishing,” said Woody Jacobs, Mayor of the City of Cullman. “By bringing the 2019 MLF Bass Pro Tour to our community this spring, we will be opening new avenues to sports tourism that were not always an option.

“I want to thank those involved with our Cullman Parks, Recreation, & Sports Tourism, along with Cullman Economic Development Agency for recruiting and securing the event; and also the Cullman County Commission and County Parks and Recreation for providing resources for this all to work. MLF consists of the top bass anglers in the world, and Smith Lake offers one of the best spotted bass fisheries in the entire United States. All of these factors, along with the tourism benefits and the prime coverage will help to make this a successful and fun event.”

Neither the state nor Cullman are strangers to the bass fishing scene. Sixteen of the Bass Pro Tour’s 80-angler field call Alabama home, and Jesse Wiggins, Matt Lee and Jordan Lee are from Cullman. Jordan Lee won the inaugural Bass Pro Tour opener in Kissimmee, Florida, and he’s the reigning Bassmaster Classic champion with back-to-back Classic titles – winning in 2017 and 2018.

The north Alabama reservoir is located on the Sipsey Fork of the Black Warrior River. It is about 21,000 acres in size and reaches depths of more than 250 feet near its dam. The lake’s diversity in depth and structure caters to literally every bass fishing technique imaginable, from topwater to drop shotting, meaning every angler should be able to fish to his liking.

The Alabama Division of Wildlife and Freshwater Fisheries (WFF) recently reopened the public boat landing that will serve as the Stage Five launch site. The renovated facility includes a 90-foot-wide, six-lane launching slab and a paved parking lot with room for 113 tow vehicles with boat trailers, and 10 cars.

Other improvements include security lighting, a paved overflow parking lot for another 70 truck and trailer rigs, a 45-foot stationary aluminum pier, two large floating aluminum piers and a fixed aluminum pedestrian bridge that connects the overflow and main parking areas. The launch site is located on the northeast side of Ryan Creek and accessed free of charge through Smith Lake Park at 403 County Rd. 386 in Cullman.

The project was funded by the Sport Fish Restoration Program, which is supported through excise taxes on the sale of outboard motor fuel, fishing equipment, and the sale of state fishing licenses. For more information about this and other WFF public boating access areas, visit boatramps.dcnr.alabama.gov/.

As for Smith’s quality fishing, anglers often find themselves challenged in deciding whether to focus on the lake’s generous population of spotted bass, target the bigger largemouth bass or rely on both. Making it even more interesting is the fact that the MLF Bass Pro Tour uses a unique catch-weigh-and-immediate-release format in which all “scorable” bass caught do count in an angler’s score. That means Smith Lake’s big schools of healthy spotted bass could be game changers throughout the competition.

“It’s going to be highly exciting to watch our MLF hammers compete in the heart of the Yellowhammer State,” said Michael Mulone, MLF’s Senior Director of Events & Partnerships. “MLF’s format will really show off how good this fishery is because bass within Smith Lake’s 13-to-15-inch slot limit will count in our competition once they satisfy the one-pound minimum rule and since MLF fish are released immediately back into the water after being caught and weighed … they don’t go into livewells.

“The Cullman folks are already working hard to make Stage Five something special and I can assure all MLF fans that this will definitely be a must-attend festival.”

As in all Bass Pro Tour events, the Cullman visit will feature seven hours of live coverage on each competition day with access to the MLF NOW! free live stream found on the league’s website, www.majorleaguefishing.com.

The Smith Lake event will also result in a two-hour television show that will air on Discovery Channel in the fourth quarter of 2019, and repeat on Sportsman Channel in first and second quarters of 2020.

For more information about MLF and its anglers, rules and sponsors, visit MajorLeagueFishing.com.

Developed through a joint effort between Outdoor Channel and the PBT anglers in 2011, Major League Fishing brings the high-intensity sport of competitive bass fishing into America's living rooms in the form of riveting two-hour TV episodes. World-class anglers are filmed over the course of a six-day event. The show captures their efforts as they utilize a demanding format that allows them to weigh all the "scorable bass" they catch. Unlike other competitive fishing events, live leaderboards in the boats allow anglers to know their standings at all times. For more information about the game, visit www.majorleaguefishing.com and follow Major League Fishing on Twitter, Instagram and Facebook. You can catch all current and past episodes of Major League Fishing on #MyOutdoorTV, the world's leading outdoor television global, streaming service provider. Also, for more information about MLF anglers, see Game & Fish magazine, the official publication of MLF.

According to Anderson, the event represents a new format for MLF, with the regular fishing tournament at the lake supplemented by a festival style fan experience downtown at Depot Park and the Festhalle.

For area school fishing teams, the event will offer student anglers the opportunity to see competitive professional fishing up close without having to travel far, and will give them a chance to interact face-to-face with the pros.

Jordan Bentley, a member of the Hanceville High School Fishing Team, told The Tribune, “I think it’s pretty exciting because, you know, Cullman’s kind of like a small town.  We don’t have stuff like that that kind of happens a lot. I think that’s pretty awesome that we get to see the pros come here and influence all of us for what we do. And they come from our hometown, so it really influences us to do it: to go on with our careers if we want to go with fishing or follow in their footsteps. I think that’s really awesome that they can show up here in Cullman.”

Said Barnette, “I am very excited that we’re going to be hosting all these professional fishermen here in Cullman, and I think it’s a great opportunity, and I’m going to do my best to get them in as many schools that they want to get into and share with young people.  Any time that we can bring some professionals that are at the top of their particular sport or event into our schools and help kids understand and reach to work hard to achieve their goals and their dreams, I think it’s a great opportunity. And I look forward to them getting out in the schools and hopefully reading to kids or talking to kids, taking pictures with kids.  I think it’s going to be a wonderful opportunity.”

The 2019 Bass Pro Tour has already visited Kissimmee, Florida and Conroe, Texas and will stop in Raleigh, North Carolina and Dayton, Tennessee before coming to Cullman.  For more on this year’s tour, visit www.majorleaguefishing.com/events/bass-pro-tour/.