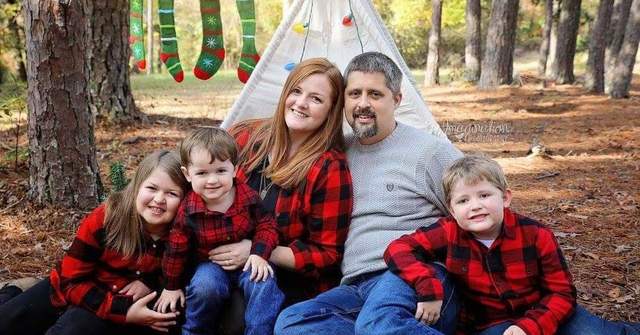 A family photo of Josh Pinkard, his wife Terra and their three children (contributed)

HOLLY POND, Ala. – Holly Pond native Josh Pinkard, a victim in the Feb. 15 workplace shooting in Aurora, Illinois, will be laid to rest in his home state. According to Holly Pond Funeral Home, friends may visit with the family on Saturday, Feb. 23 at 4 p.m. at Loft 212, 212 Fourth St. SW, Cullman, AL 35055. Pinkard will lie in state from 1-2 p.m. on Sunday, Feb. 24, with  funeral services following at 2 p.m. at Loft 212. Burial will follow in the cemetery of Redan Baptist Church in Holly Pond.

Read the full obituary below:

Josh Timothy Pinkard, 37, of Aurora, Illinois, walked into the arms of his Lord and Savior on February 15, 2019.  Josh served the Lord faithfully with his wife and children.  He was an unbelievable man – a loving husband, father, son, brother, nephew, cousin, and friend.

Josh was always considered an exceptional leader in school and on the job.  He graduated from Holly Pond High School, Holly Pond, Alabama, in 2000.  He earned a Bachelor of Science degree in Industrial Engineering from Mississippi State University in 2005 and a Master of Science degree in Operations Management from University of Arkansas in 2018.  After receiving his B.S. degree, Josh worked at Heatcraft in Grenada, Mississippi.  He then began working at Mueller Water Products, Albertville, Alabama, in 2006.  In 2018, Josh accepted the position as Plant Manager at the Henry Pratt facility in Aurora, Illinois.

Josh had an infectious laugh that brightened any room.  There was no person he met whose life he didn’t touch.  His family and friends mourn the loss of their beautiful Josh, but they do not mourn without hope.  They have the promise of reuniting with him in heaven one day.

Josh was welcomed into the Lord’s presence by his sister, Kateah Pinkard, and by his grandparents,  G.W. and Opal Pinkard, and L.D. and Wynell Chambers.

*The “State” family has requested that you bring your cowbell to the funeral to ring in honor of Josh at the conclusion of the service.