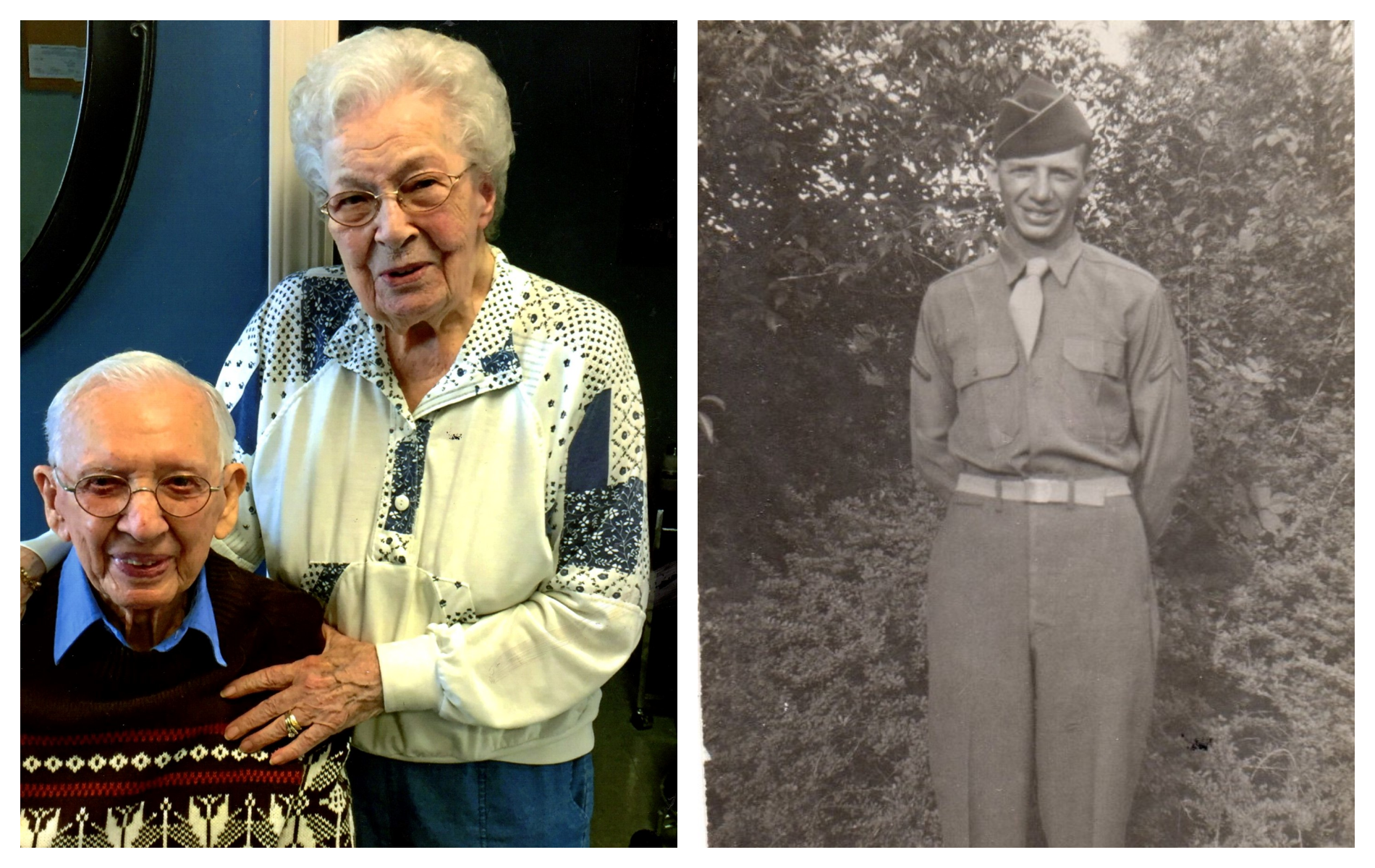 Lew and Hilda Paden; Lew Paden during his military service (contributed by family)

World War II veteran Lew Paden recently celebrated his 105th birthday. He was born outside of Tulsa Oklahoma in October of 1913. His parents were farmers of German-Dutch descent. He grew up going to church and met his wife of 77 years, Hilda, there. Both Paden and Hilda currently reside in Cullman.

Paden was wounded in the first battle and he was sent to in Holland. He was shot through his left hand.

“I was in the big hospital in Paris,” he explained. “The doctors had said my hand could not be saved and were planning to amputate my hand. In walks a French-Canadian doctor who looked at my hand and he saved my hand.”

Paden served in the United States Air Corps until the end of the war.

Paden added, “We went after D-Day and I believe I was on the USAT George Washington but not sure. They used ocean liners like the Washington, Queen Elizabeth and Queen Mary to transport the soldiers to Europe. It normally took three days for those ships to get to England. It took us 15 days due to maneuvering. When we made it, some guys went to England and some went to France. I went to Cherbourg, France.”

When the war was over Paden came back to the states and was taken by train to Tyler, Texas.

He said, “We went right through Oklahoma, my home, and I wanted to get off that train. Instead, they took us on to Tyler, Texas for a week or two. It was a recruitment thing in Texas. I remember them telling us all the great reasons to be in the Army. Of course, those who had been stateside were speaking to all of us coming home from combat. I guess we had a different perspective. Those who did stay in were paid more money and promoted. I just wanted to go home.”

Paden made $20 a month for his service while Hilda was given $75 a month.

Paden laughed, “I did get a deck of cards once. Folks back home would send care packages, but most things would be stolen before the package got to the soldier. I received an empty box of cookies once.”

When Paden got home to Hilda in Oklahoma, he went to work for an oil company. The Padens moved to Whiting, Indiana where the company was based and where he would retire. The company was eventually bought by British Petroleum (BP).

Paden and Hilda had one son named John. As a child, John frequently battled pneumonia and one year the Padens went to Chicago to seek help for him.

Paden said, “The hospital said they couldn’t tell us which doctor to pick but could tell us a list of available physicians. We picked the doctor they mentioned most often. The doctor came in, and he looked at me a minute. He asked me, ‘Were you in the war?’ I said yes. He asked, “Were you in the hospital in Paris?” I said yes. He said, “Were they wanting to take your hand?’ I said yes! That French-Canadian doctor who saved my hand was who we had picked! The same doctor helped my son 15-20 years later.”

In 1980, John needed a kidney transplant. By then, John was working and living with his family in Cullman. Paden and Hilda came down to help their son. Paden donated a kidney to his son.

Paden recalled, “The doctors said kidney transplants were good for 8-10 years. Well, that kidney lasted 25 years. We would fly back so often after the surgery, we decided to just move to Cullman in 1984. It’s the best place we’ve ever lived.”

Paden said through tears, “I said son, I would gladly give you the other kidney I have if I could. John came home one day and said he didn’t feel well. John was taken to UAB that evening, but he never woke up.”

Lew and Hilda Paden love Cullman and were active members of the First Baptist Church in Cullman. Paden is especially proud of his granddaughter Karen Farley, a teacher at West Point Elementary.

He said, “She is so good with kids. She’s the best I’ve ever seen!” Karen is married to West Point head football coach Don Farley.

Paden also bragged about his great grandsons Brandon, Bryant and Maddox. Paden and Hilda also have one great-great grandson, Brycen.