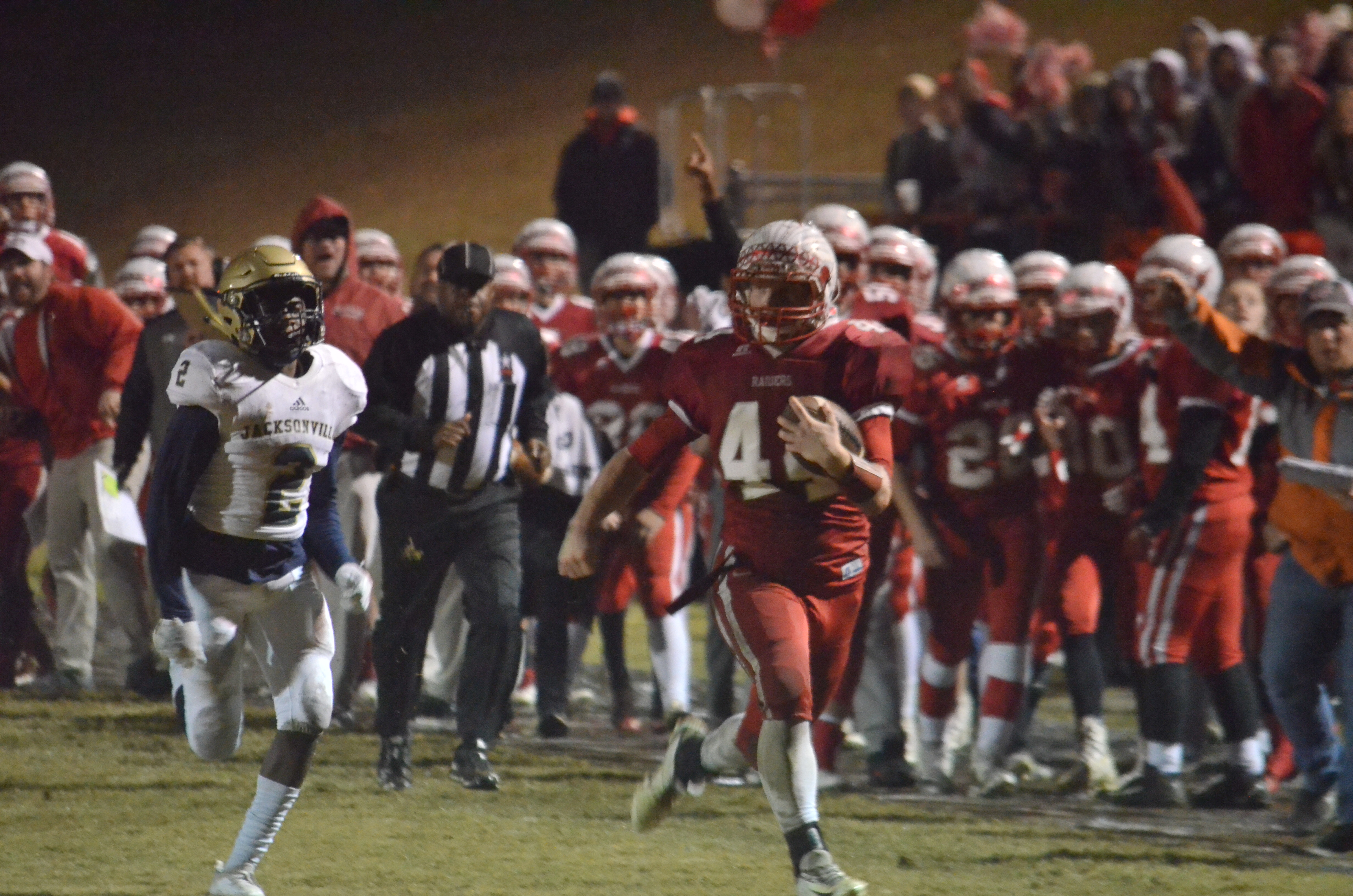 GOOD HOPE – The Raider defense showed up and showed out Friday night as Good Hope defeated the top-seeded and undefeated Jacksonville Golden Eagles 27-12 for its first second-round playoff win since 1997. The packed-out stadium was full of fans who had lots to cheer about as Good Hope racked up 377 yards of offense and collected three interceptions in the fourth quarter.

Both teams started a bit sluggish; both had to punt it away on their first possessions, but Good Hope found its rhythm on its second possession, going 85 yards on seven plays with the largest chunk being a 51-yard Bailey Quick pass to Matt Dixon. Several Raiders saw action on the drive as Preston Bagwell caught a 10-yard Quick pass and Colton Bagwell knocked out a 13-yard run before Dixon pounded across the goal line to put Good Hope on the board 7-0.

The Raider defense has been tough all year and tonight was no different. It forced Jacksonville to punt another three-and-out, shutting down the Eagles’ drive before it ever started. Good Hope took over on its own 28 to start its move. Another Quick to Dixon pass went another 15 yards to get the Raiders rolling before the run took over. The work horse, Dixon, had four more carries before Isaiah Green broke left on an end around handoff, taking it 39 yards for the score, extending the Raider lead to 14-0.

Linebacker play for the Raiders was phenomenal as they were in the backfield most of the next Jacksonville possession. The Golden Eagles could not get anything to go their way with the Good Hope defense in their face on the snap of the ball. They punted the ball away to the Raiders, but a key holding penalty forced a punt, stopping the Good Hope drive.

Again, the defense would come up big. It forced another punt, but a bad snap and forceful tackle gave the Raider offense the ball on the 20-yard line. Good Hope wasted no time, as two plays later the Raiders found the end zone on a 19-yard Dixon touchdown run. The extra point was no good, leaving the score at 20-0 with 1:32 left in the first half.

Jacksonville would not be denied all night. On their next outing, the Golden Eagles connected on a 44-yard screen pass, putting them deep downfield at the 12. Good Hope gave up two personal foul facemask penalties which helped Jacksonville punch it in for a touchdown. The Raiders got into the backfield on the 2-point conversion attempt and stopped it cold, and Good Hope would take a knee to end the half with a 20-6 lead.

The second half started much like the first half ended. Jacksonville fumbled the kickoff and the Raiders pounced on it at the 39. The Raider offense took advantage as the Quick to Dixon combo saw more action for a 31-yard gain, but a chop block call two plays later backed the Raiders up 15 yards. The penalty didn't faze them as Quick, once again, found Dixon in the corner of the end zone for the 19-yard score that would end up being the last for the Raiders. The touchdown extended the lead the 27-6.

Jacksonville got some help from two Good Hope personal fouls, putting the Golden Eagles down to the 28-yard line. Two plays later, wide receiver Jewels Gray hauled in a 28-yard touchdown putting six more on the board. The 2-point conversion failed, setting the score at 27-12. This would be the final score of the game.

It was a defensive slugfest from then on out. The next four possessions saw two Jacksonville punts and a Good Hope turnover on downs and punt. Neither offense could make much happen.

The Raider defense stepped up big to put a bow on this game, getting back-to-back-to-back interceptions on the next three Jacksonville possessions. First to step up was Preston Bagwell, intercepting the ball in the end zone to save a score after a long 57-yard pass put the Golden Eagles deep in Good Hope territory. Dixon shone on the next Jacksonville outing, intercepting a ball at midfield and returning it 31 yards to the Eagle 19. On the final Jacksonville offensive possession of the game, Good Hope’s Riley Kilpatrick, lined up at tackle, received an early Christmas present as an Eagle pass hit him right in the sternum and the crowd went wild as he held on to it for the Raiders’ third interception of the quarter. The band was rocking as the Raider offense took a couple of knees to end the game and advance to the quarterfinals.

After the game, Good Hope Head Coach Alan Scott talked about how special it is for him as a coach to have a huge senior class on this team that he can rely on for leadership and production.

“It’s unbelievable, these guys have played together for so long and they just really love one another and want to play their hearts out for each other,” Scott said. “I’m just so thankful for them.”

The line of scrimmage belonged to the Raiders and Scott believes that’s really the biggest area that can make a difference when it comes to winning and losing. Scott and his team feel blessed to be playing some of their best ball at the right time and he’s keeping that in mind going forward.

“Football is a very simple game and I know you hear coaches say it all the time, but it’s about blocking and tackling. You win and lose on the offensive and defensive line and we’ve got some guys that will flat out get after you right now so, man, it’s just fun to watch them play,” Scott said. “God is good. He blesses us every day with the ability to come out here and coach these guys, he blesses these kids with the ability to play this sport and he’s good all the time.”

The 4A Raiders (11-1) will travel to take on (9-3) Oneonta for a chance to advance to the semifinal round for the first time in 21 years.