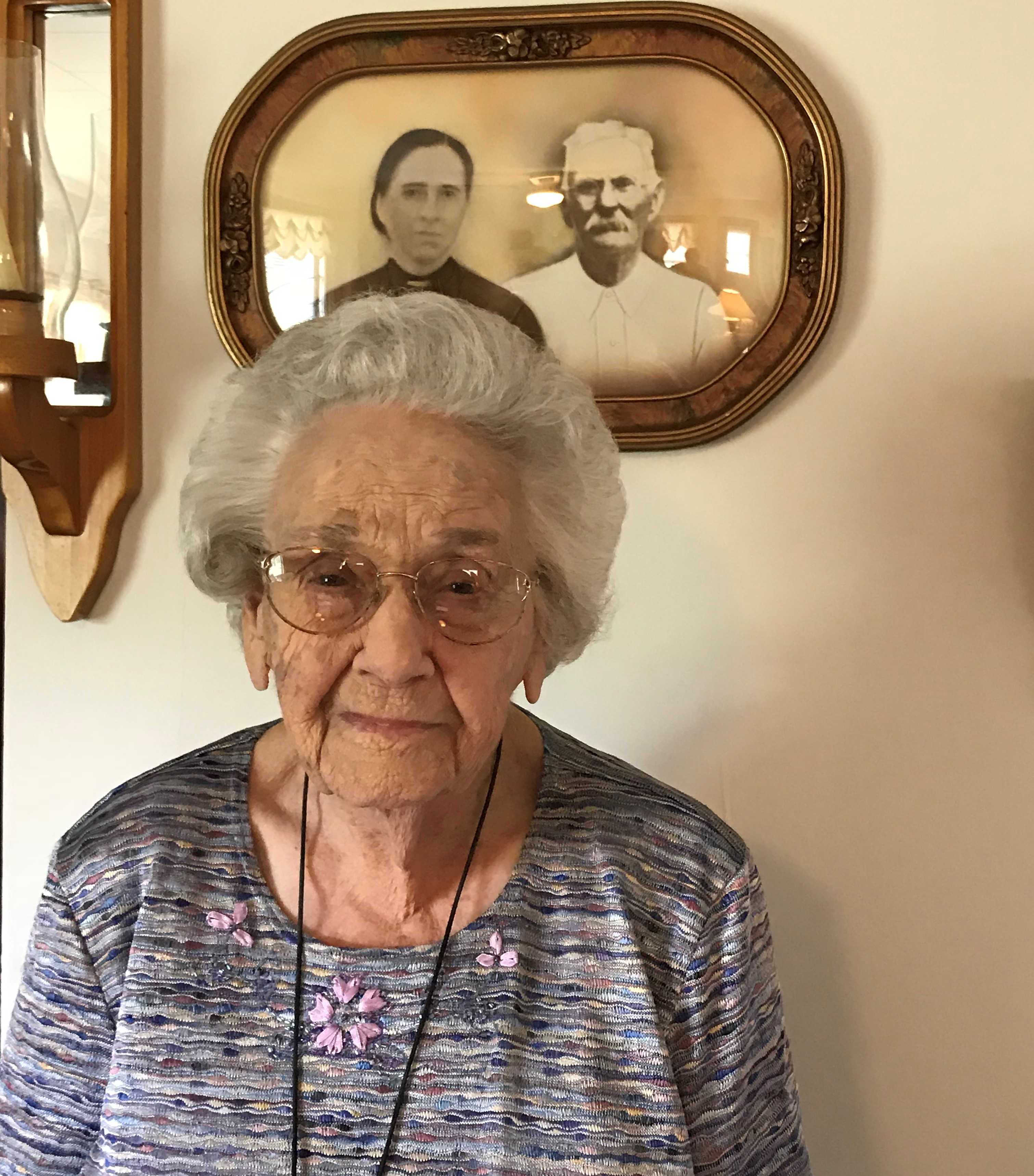 It was winter of 1919 in the new log house. So new, the house had not been sealed. Edna Calvert Graves was only 3 years old that winter when the snowstorm came and the snow began blowing into the house. Edna’s older sister, Onie Belle, and their papa carried her upstairs to put quilts in the loft to protect her momma and her new baby sister, Vedma, from the snow falling into their bed.

Edna and her 10 siblings grew up in Brushy Pond in southwest Cullman County. Edna celebrated her 103rd birthday on Sept. 12. She recently sat down with The Tribune and several nieces in her home down the road from where she was born and raised. Her memories and stories span more than 100 years of life in Brushy Pond and Bremen- knowledge that you can’t get from any Google search.

Edna had one sister, Carrie, whom she would never know. Carrie passed away as a child of scarlet fever. Scarlet fever was common then with frequent outbreaks.

As a child and throughout her life, Edna and her baby sister Vedma had many great adventures.

“We didn’t have toys growing up. They were very expensive. We had to entertain ourselves, but we had so much fun! We made playhouses. We would take a board, stack two cans and add another board, and more cans. That would be our stove! We made mud pies, made corn husk dolls and even made a slide board off the cliff. We had to walk back up, but it was worth it.”

Edna’s Grandma Calvert, Eliza Jane Hunter, had a medical adviser which told what could be done for illnesses. The medical advisers were popular and at one time, Edna’s grandma loaned it to the local physician, Dr. Moon. Edna still has her grandma’s medical adviser. According to Edna, “Sassafras tea would help with many things and it tastes really good.”

In the winter, the girls would collect ice and, using an empty Padlock Coffee Bucket, make ice cream.

Edna said, “We raised everything we had. We didn’t buy nothing! We raised chickens and hogs; we grew all of our own vegetables. On Sunday, momma would cook for everyone. We had a table that would sit eight people and that table would turn over three groups. Then momma’s family from Good Hope would show up. They’d all eat and there was still food left over for the hogs!”

Edna explained how they kept potatoes in a pit to keep them protected during the winter, in a knee-deep hole covered with cornstalks, dirt, and grass to keep them from freezing. These pits could double as a tornado shelter. Milk would be kept in the well bucket or in the spring nearby to keep it cold in the summer. Her Uncle Houston had rows of honey bees and Edna’s momma would also tend to the bees. Not everyone liked the bees, swarms of which were a frequent encounter.

Edna went to school through the eighth grade at Brushy Pond School.

She said, “The school was south of Brushy Pond near Coon Creek.” She went to Cold Springs School for a short time but left her ninth-grade year when her momma became ill.

Edna recalled, “I learned to sew and quilt. I learned to help turn the ground and plant it. We would plow with our cultivator. By the way, the cultivator was a mule.”

What few things the family did buy, such as coffee, sugar, fertilizer and feed, were all repurposed. The coffee came in large red buckets that had many uses. The other items came in large cloth sacks that were used to make clothes.

“We would get fertilizer at Stricklin’s store. The guano (a fertilizer) sacks were made of the softest white cotton. Those were wonderful.” Many companies during this time began using floral or other pretty bags for their products knowing that customers were making clothes out of the sacks.

Christmas was a fun time for Edna and her siblings: “We were poor, and toys were so expensive. Santa always came and brought us candy and fruit. One year Santa brought Vedma and me a beaded bag and a red rubber ball. We were so proud and when we told a friend at school what Santa had brought us, she told us who really brought it. I was devastated but loved the gifts regardless.”

The 4th of July was Edna’s favorite holiday. “Everyone came home for the 4th. All the kids would play and down in the hollers in one place were these giant oak trees. The trees made a giant rainbow over the path and Vedma and I just had to cross over those trees. It was dangerous, and momma would say, ‘You girls better not go to that old tree!’ but we did. We couldn’t help it!”

As teenagers Edna and Vedma would go to the “singins.” These were the social events at the time. Edna went to a singin’ in Cullman one night in 1937 with some friends. She and another friend accepted an invitation to ride around with some other kids including a young Ronmon Graves from Cold Springs.

The following Sunday, Ronmon asked Edna for a date. She agreed, and in 1938, 11 months later, they were married.

She laughed, “We didn’t have big weddings back then. We didn’t have big white dresses. I wore my blue dress. It was Ronmon’s 21st birthday and he picked me up. He forgot the marriage license, so we had to turn around and go get it before we set out to find the preacher. We did find the preacher. He was sitting at Prospect Mountain on the side of the road. We pulled up and told him we needed him to marry us to which the preacher said, ‘Here’s just as a good a place as any!’ So he did! Right there on the side of the road! We never even got out of the car. He married us, and we drove home.”

Ronmon and Edna were married for 65 years. Edna’s advice: “We had a happy life together. I had two rules: I told Ronmon, I won’t live with a drunk and (two) I won’t live in a fuss. He agreed. He never was a drunk and we never had a fuss in our 65 years together.”

Ronmon and Edna had two sons. Donald was born in 1940 and Blair in 1943. This was during World War II in a time when many products were in high demand and many items were being rationed.

Peanuts were on a government list of crops that farmers could provide in exchange for going overseas. It was considered service, so the Graves family planted 3-4 acres of peanuts for the government. This allowed Ronmon to stay home with Edna and their two young boys.

She added, “I checked on those old oaks Vedma and I played in and was relieved that they had rotted. I played in them, but just like my momma, I didn’t want my boys up in those trees.”

When Donald was a baby, Edna did get a job outside of the home. She was hired to work at the King Phar pepper plant. She worked one day, but although her work ethic garnered praise, the guilt of being away from the baby and her duties at home led her to quit. Eventually Ronmon would find a good job in strip mining which allowed the family to purchase land and build its own home where Edna lives today. Her son Donald lives on the property in a separate home.

Ronmon passed away in 2002. Edna’s sister Vedma Calvert Swann passed away in 1995. Edna still lives in the home she and Ronmon worked so hard to build. Her son Blair makes and brings her sausage and Donald is also nearby. Old pictures are displayed throughout her home.

She said, “I just love these old pictures. I walk around and look at all of them and I’m just filled with so many wonderful memories.”

Edna loves gospel music. She is a sacred harp singer. She and Vedma were both talented fasola singers and sang throughout the area. She loves the old style of singing that served as a backdrop for her life. The traditional style of gospel music was at the center of social gatherings, and traveling from church to church brought so much joy to Edna and her family. She isn’t a fan of all the new type of gospel music today. “It lacks the spirituality of the old book singing. The new stuff is a big racket,” she said.

Edna loves sewing, and her 60-plus-year-old Singer machine sits threaded up and ready. She proudly showed everyone a photo album of the many quilts and afghans she created for friends and family. She took out a gorgeous crocheted shawl that she hasn’t finished. “I love to crochet, but for the past year it’s gotten harder. It’s harder for me to see what I’m doing.”

Edna stays busy and sharp doing word puzzles. She also keeps up with “the stories.”

She likes “The Young and the Restless,” “Days of Our Lives” and “General Hospital.” She also enjoys cooking shows and classic television shows.

Besides her sons Donald and Blair, Edna has three grandchildren, five great grandchildren and one great-great grandchild. She couldn’t say how many nieces and nephews she had but she only has four living nieces and nephews today. She said she was expecting many visitors for her birthday including her great-nephew Joe, who has recently undergone a heart transplant. He will be able to travel from Ohio to visit.

Edna Calvert Graves’ advice on a long happy life is simple: “Clean living and hard work. Be decent and treat people right. Treat everyone with respect. There are people I might not have cared for, but we are all human and equal. We can be friends with people we don’t always agree with and there’s no good that comes from fussin’!”