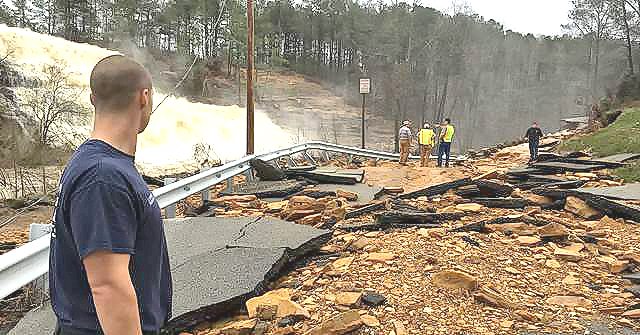 CULLMAN – On Christmas Day 2015 the rain was falling…and falling…and falling.  Estimates ranged from 8-10 inches in a 24-hour period, rivers and creeks overflowed, roads were washed away and bridges were submerged.  Larkwood Bridge in Cullman sat 5 feet below the water line, while the city's wastewater treatment plant suffered more than $2 million dollars in damage as water rose over pumps, motors, disinfection devices and unprotected electrical systems.

On Jan. 21, 2016 FEMA's damage assessment report led to a presidential declaration of Alabama as a federal disaster area, opening the way for government assistance.

It was a once-in-a-lifetime (hopefully) occurrence whose statistical probability is one percent or less.  No agency could be truly prepared for such a disaster.  Cullman County Emergency Management Agency (CCEMA) Director Phyllis Little knows that people whose homes and property were damaged were upset and understandably frustrated, but she maintains that the system worked as well as could be expected under very unexpected circumstances.

"That was a hundred-year event," she said. "You can only be prepared for what you know about."

Little told the Tribune that CCEMA has not made any substantial changes to its policies or methods in the wake of the flood.  The system functioned as intended; any drawbacks were the result of the scope of the disaster, not to failures of the system or personnel.

She stated, "What we had in place worked.  Very few changes have been made."

Little gave a brief overview of CCEMA's procedure.  The agency is the first line of response to a weather emergency.  As soon as the National Weather Service in Huntsville indicates dangerous weather, the CCEMA Emergency Operations Center at the office is activated, and staff comes in.  All local response agencies (police, fire, etc.) are contacted, and constant communication continues until the event ends.

Little concluded, "We are on duty as long as the threat exists to the people of Cullman."

The road system of Cullman County suffered around $700,000 in damage, according to Cullman County Engineer John Lang.  Even though most county roads were reopened within days of the flood, numerous repairs were needed for long-term safety.  Lang says that, as of now, all repair work related to the flood has been completed, and the County is simply awaiting reimbursement of certain expenses from FEMA.

Lang was pleased with the way in which the road department handled its share of the flood disaster, and he feels the agency is fully prepared to respond again if needed.

He said, "The guys out here always seem to come in full force and respond well, so I believe we'll be ready for any natural disaster."

While roads and bridges suffered throughout the county, maybe the most visible image of such damage occurred along Convent Road and Larkwood Drive around Larkwood Bridge within the city of Cullman.  Road foundations were undermined and pavement collapsed, causing around $700,000 in damage, an amount equal to all the road damage in the rest of the county.  The bridge was completely submerged.

Today, Larkwood Drive remains an ongoing project for the City.  Cullman has selected engineers to oversee the project, and has approved designs for the new road.  According to Cullman City Clerk Wesley Moore, the reconstruction project will be completed within the next year.  Once it is complete, the City hopes Hazard Mitigation assistance from FEMA will allow improvements, including a possible retaining wall, that will make the road more resistant to such damage in the future.

The Larkwood and Eva Road bridges will both be replaced soon, though neither was significantly damaged by the flood.  Both had already been targeted for upgrades as far back as 2013, and these projects continue.  Geological testing around the sites is underway, and the City will soon begin receiving bids for new bridge construction.

The 2015 flood inflicted some of its worst damage on the Cullman Wastewater Treatment Plant, which suffered more than $2 million in losses as equipment was flooded.  Jeff Adams, plant superintendent, says that while the plant is up and running, it is still in recovery mode almost a year later.  All pumps and motors have been repaired or replaced, and all electrical controls at the plant have been relocated 8 feet above their original locations (the flood water inside the plant rose 6 feet).

One of the plant's biggest losses, and its major remaining project, is an ultraviolet device used to disinfect water on its way out of the plant into local streams.  The device in use before the flood was destroyed.  Today the plant uses a chemical system that introduces then extracts chlorine from the water as it leaves.  Adams insisted that, despite the loss of the UV device, the water leaving the plant is still clean and safe.

With 2.4 million dollars in assistance from FEMA, Adams is acquiring an upgraded UV device that can survive total submersion in flood water.  Not only will it be more durable, but it will also be more energy efficient than the old device, costing only about half as much to power.  The system will go to bid soon, and the City hopes to see it up and running by this time next year.

All those interviewed seemed to agree on three points:

2. Cullman is as ready as it can be for the next disaster.

3. This was a once-in-a-lifetime event, and once was enough.