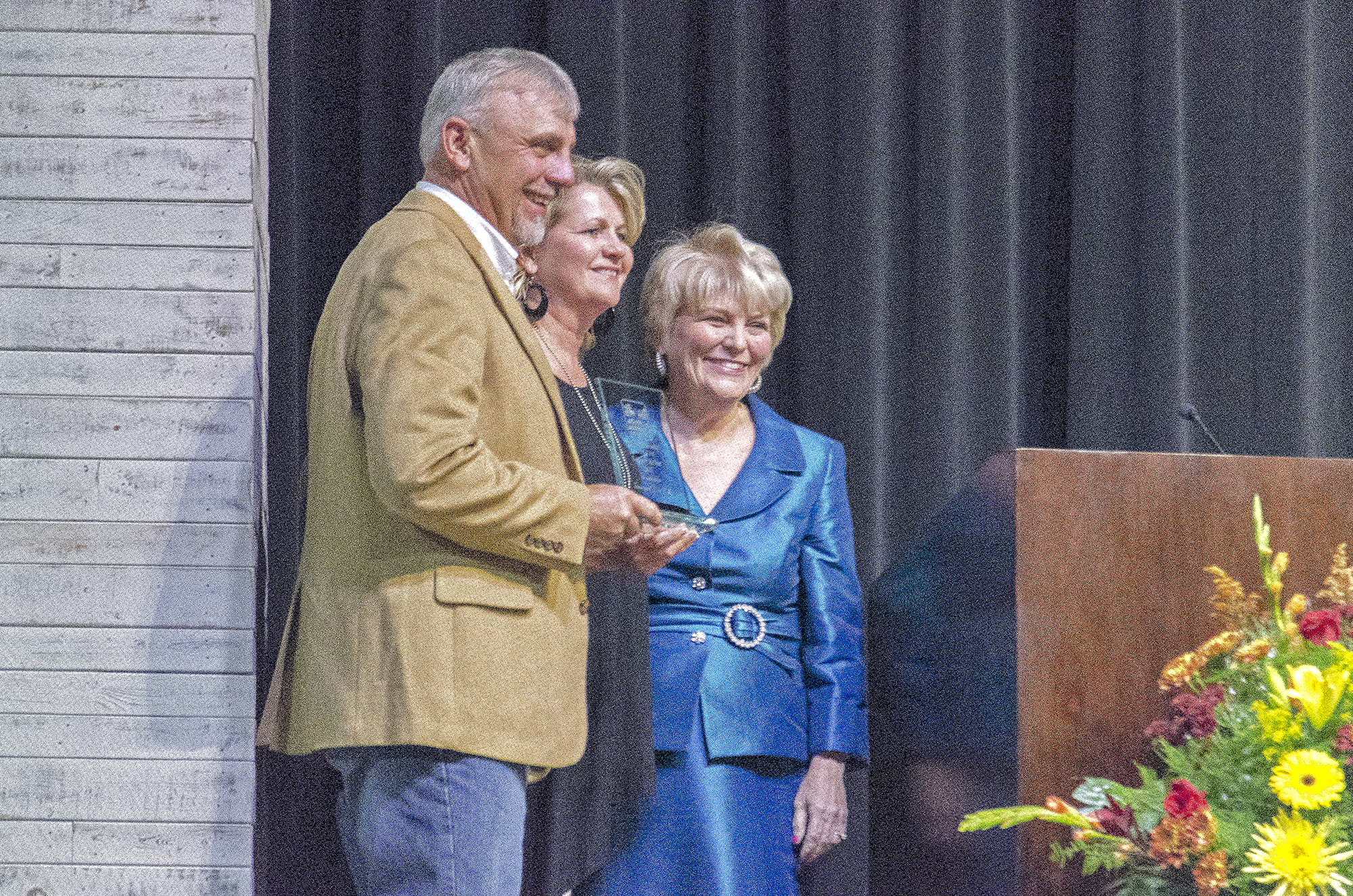 CULLMAN – On Thursday, Nov. 19, Steve and Lisa Lake from West Point were named Cullman’s 2016 Farm Family at the annual Farm-City Banquet, with special recognition given to 2015’s outgoing Farm Family, Dr. Bill and Carolyn Peinhardt of Cullman. The banquet is a part of Farm-City Week, which is celebrated each year beginning on the Friday prior to and ending on Thanksgiving Day.

“When I think of all the families that have stood here before us, it makes me feel awful small because there have been some great families that have stood here from the farm and city alike,” said Steve Lake. “Every [sic] since I was a little boy playing with my tractors in the dirt, all I’ve ever wanted to do was farm. God has blessed me with that opportunity and I am thankful for that tonight.

“One other thing I’d like to say is God has blessed me because of where he placed me,” Lake continued. “You don’t have to go very far to realize that Cullman is a very special place. It’s no coincidence that we lead the state in so many categories in agriculture.”

Farm-City Co-Chair Denise Schuman shared that the theme for 2015 is Agriculture: Sustaining Future Generations. She said it’s not only about where we’re going, but where we’ve been.

“Tonight is not just our Farm-City Banquet, but it’s a time for us to give thanks for the many blessings that have been bestowed upon us. This is the perfect opportunity for us to gather together and do that,” said Schuman.

2015’s Farm Family, Bill and Carolyn Peinhardt, was presented with a beautiful portrait by Photography by Theresa.

“Thank you to all the Farm-City Committee,” Dr. Peinhardt said.

“I did notice the portrait has been touched up a little bit,” he teased. “We are very proud to be able to serve this year. Carolyn and I are really thankful to have grown up here in Cullman. She was a city girl and I was a farm boy. We were able to come back to Cullman, we raised our children here and now we have five grandchildren growing up here. We are just blessed by all the good things that Cullman has to offer.”

The youth poster contest played a big part in the Farm-City celebration. Cullman County Farm-City awards prizes to the local winners. State winners will be featured in the Alabama Farm-City Committee's 2017 Farm-City calendar. Children from all over Cullman County participated in the event.

“We had a total of 475 posters submitted for this contest,” Shuman explained. “In the K-3 division there were 352 posters and in the 4-6 division there were 123. Unfortunately, out of all 475, we had to narrow it down to 50 that will be judged for tonight’s contest,” she winced. “The winner of tonight’s contest will go on to compete at the state level. Cullman County has always done very well. I can’t remember a year that we didn’t have someone whose poster was featured in the calendar.”

The purpose of Farm-City Week is to bring about a better understanding between rural and urban people by increasing their knowledge and appreciation of each other as partners in progress.