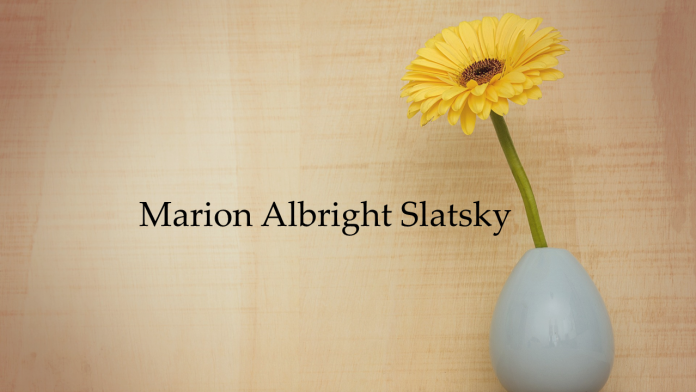 Marion Albright Slatsky grew up in Tuscaloosa, Alabama. At a young age, she had striven to learn everything she could…read everything she could. Books were her pathway to new adventures and knowledge, carving a path forward over the years to come. After graduating with a bachelor’s degree, she worked tirelessly as a medical technologist so that she could create a loving and stable life for her two small children. It was when she worked at Children’s Hospital that she met the love of her life, John Slatsky. The two would forge a union that spanned over 50 years and welcomed another child into the family. In the late 70s, she went on to direct the med lab program at Wallace State Community College, where her commitment to her students created a legacy that would impact generations to come. She was also a member of Hamby’s Chapel, where she was devoted to her church family and the teachings of Christ. She walked the walk, spreading His message through the example of her life and her commitment to her fellow man.

Marion had an insatiable curiosity that often led her to immerse herself in new hobbies, which would inevitably take on a life of their own…until she decided to conquer a new interest. Whether it was cross-stitching, hook rugs, or birdwatching, she embraced everything with her entire spirit. An avid sports fan, she could always tell you who was playing whom on football weekends, which golfer was favored in any golf match and even who was winning the curling competition in the Olympics. She also drew energy from exercise and nurtured many friendships as she logged countless miles and jumped to tunes in aerobics (though she had absolutely no rhythm, but that was just part of her charm). Coming full circle, her love of reading finally prompted her to write her own novel, a western that allowed a glimpse into the mind of Marion Slatsky. She lived a life of love, creativity, determination and purpose. Looking at her, one might never know the hardships she faced along the way or realize that the calm and sweet woman standing before them was made of fortified steel, keen intelligence and a fierce love for her family and friends. To have Marion Slatsky on your side was like having a small army. She would move mountains to help others and frequently did. The world was a better place with her in it, and everyone she encountered was a better person for having known her. She will be remembered fondly and missed dearly.

She was preceded in death by her husband: John Slatsky; her mother: Doris Albright; her father: Fletcher Albright and her brother: Fletcher Frank Albright.

A graveside service at Hamby’s Chapel United Methodist Church Cemetery will be held July 20, 2021, at 2 p.m. In lieu of flowers, the family requests that donations be made to the Cystic Fibrosis Foundation to support Marion’s great-granddaughter, Addison, in her fight against Cystic Fibrosis. http://fightcf.cff.org/goto/addisonsavengers.