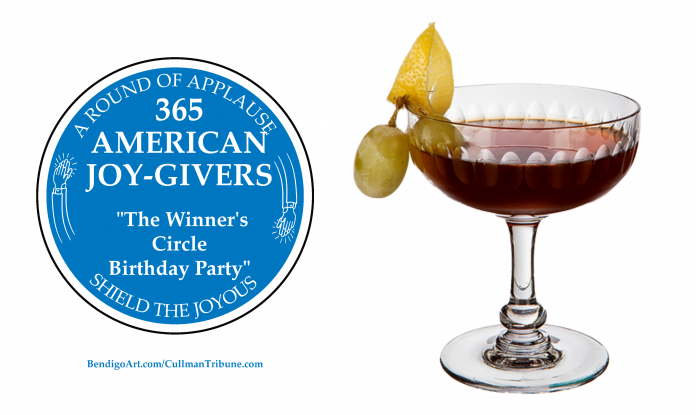 Brooke Astor was known as “The Queen of New York.” Her beloved country house, “Holly Hill,” in Briarcliff, New York is the regal setting for “The Winners Circle Birthday Party.” The Westchester County estate has more than 10,000 square feet, including 24 rooms, 13 bedrooms and both indoor and outdoor swimming pools.

Because this late-March day is warm and sunny, Mrs. Astor’s butler ushers us to a lovely luncheon in her luxurious gardens.

You sense the joy the minute you walk into the gardens. HOORAY FOR THE JOY-GIVERS! (Note: The comments attributed to these famous joy-givers come from words they have written or said.)

Please give A ROUND OF APPLAUSE for these American joy-givers celebrating a birthday this week:

March 27—QUENTIN TARANTINO (born in Knoxville, TN) is a film director, screenwriter, producer and actor. He is one of the most-influential creatives of his time, which is—NOW. His films are characterized by non-linear plotlines, buckets of bloody entertaining violence, ensemble casts, dark humor and joy-giving comeuppance.

(Side note: One of my most-embarrassing moments in a movie theater (and there are others) was seeing a matinee of Tarantino’s, “Django Unchained” with maybe five other people in the auditorium. About midway through the film, after I thought I’d become inured to blood-spurting, headless cowboys, I was so startled by a scene, I hollered out loud as if I’d been speared. I’m sure you understand why I waited through all the final credits to roll before I slunk out to the lobby.)

Tarantino’s first independent film was the hugely successful “Reservoir Dogs,” which he financed from the sale of the screenplay he wrote for the hit, “True Romance.” “Pulp Fiction” was next, then “Kill Bill,” “Inglorious Basterds,” (yes, grammar police that is the way the film title was spelled) and his recent award-winner, “Once Upon A Time In Hollywood.”

March 28—CHARLIE McCOY is one of America’s most-listened to harmonica players and one of Nashville’s most-sought after session musicians. He was the leader of “HeeHaw’s Million Dollar Band.” You’ll hear him on recordings from: Elvis Presley, Johnny Cash, Loretta Lynn, Chet Atkins, Waylon Jennings and hundreds of others. Charlie McCoy has been inducted into the Country Music Hall of Fame and the International Musicians Hall of Fame. The Florida native’s first recording as a harmonica player was the song, “I Just Don’t Understand” performed by Ann-Margret. My personal favorite, Charlie McCoy harmonica soloing is heard throughout Roy Orbison’s million-selling, “Candy Man.” If you are wanting some extra joy in this second (feels like 10th) year of the pandemic, you’ll want to YouTube this song soon.

March 29—BROOKE ASTOR was a socialite and one of America’s wealthiest and most high-profile philanthropists. (Yes, I know, nice work if you can get it, but she also gave joy to thousands through her generous support of worthy causes.) Her third marriage was to Vincent Astor, great-great grandson of America’s first multimillionaire fur trader, John Jacob Astor. Miz Brooke (her close friends called her) Bobby, was the chairwoman of the Vincent Astor Foundation. She also authored two novels and two volumes of personal memoirs. The charities she supported included: The Metropolitan Museum of Art, New York Public Library, The Animal Medical Center (NYC), the Fresh Air Fund and Lighthouse for the Blind.

Brooke Astor was awarded the National Medal of Arts and the Presidential Medal of Freedom for her tireless, philanthropic work.

March 30—SECRETARIAT is the only nonhuman rostered in this yearlong series, “365 AMERICAN JOY-GIVERS for 2021.” He was the first Triple Crown winner in 25 years. Secretariat was born in Virginia but spent much of his life in Kentucky. He set speed records in all three races for the Triple Crown: the Kentucky Derby, the Belmont Stakes and the Preakness Stakes. He won five of horse racing’s coveted “Eclipse Awards,” including “Horse of the Year.” If they had a “Horse of the Decade,” he would have one that, too, and “The Horse Giving America the Greatest Joy.”

The big, handsome, chestnut-colored stud was a champion joy-giver in his many celebrations in the “Winners Circle.”

Here are quotes associated with the joy-giving life of Secretariat:

“He laughs at fear, afraid of nothing…In frenzied excitement, he eats up the ground. He cannot stand still when the trumpet sounds.”

“Behind every legend is an impossible dream.”

“This is not about going back. This is about life being ahead of you and you run at it.”

“Never run faster than your guardian angel can fly.”

March 31—CESAR CHAVEZ was born in Arizona and became an American labor leader, community organizer, successful businessman and Latino American civil rights activist/hero. He was revered as a “folk saint” by Mexican Americans. His birthday, March 31, is a federally-commemorated holiday in several U.S. states. He received the Presidential Medal of Freedom.

April 1—DEBBIE REYNOLDS was born into a poor family in El Paso, Texas. Her mother took in laundry to add to the family income. Reynolds’ dad was a carpenter and railroad laborer. Per Debbie, “We may have been poor, but we always had something to eat, even if Dad had to go out in the desert and shoot jack rabbits.” Debbie Reynolds was a bestselling recording singer, a television and film star, a nightclub performer and a businesswoman. She became an iconic American superstar as the title character of the “Tammy” movies. She owned a dance studio and a Las Vegas casino/hotel. She even released an exercise video, “Do It Debbie’s Way.” She won Oscars, Golden Globes, Emmys and a Tony award. She’s on the Hollywood Walk of Fame and actually became Dr. Reynolds when the University of Nevada (Reno) gave her an honorary degree for her many years of support to film studies.

April 2—MARVIN GAYE was born Marvin Pentz Gay, Jr. in Washington, D.C. He was an award-winning singer, songwriter and record producer. He helped shape the sound of Motown in the 1960s, first as a session performer, then with duets and solos. He was musical royalty, called “The Prince of Motown,” and “The Prince of Soul.” His song hits include: “Ain’t No Mountain High Enough,” “Ain’t Nothing Like the Real Thing,” “Ain’t That Peculiar,” “I Heard It Through the Grapevine,” “Sexual Healing,” “Some Kind of Wonderful,” and “What’s Going On?”

“I didn’t go to film school, I went to films.”—Quentin Tarantino

“The song is like a picture, session musicians like me provide a frame to make the picture look and sound good.”—Charlie McCoy

“Money is like manure; it’s not worth a thing unless it’s spread around.”—Brooke Astor

“To make a dream come true, the first requirement is a great capacity to dream; the second is persistence.”—Cesar Chavez

“Singin’ in the Rain” and childbirth were the two hardest things I ever had to do in my life.”—Debbie Reynolds

“Too busy thinking about my baby and I ain’t got time for nothing else.”—Marvin Gaye

“Don’t write what you think people want to read. Find your voice and write about what’s in your heart.”—Quentin Tarantino

“It’s quite an art to ask people for money. But I think that I have to ask them for money for the things I’m interested in. And, of course, money breeds money.”—Brooke Astor

“True wealth is not measured in money or status or power. It is measure in the legacy we leave behind for those we love and those we inspire.”—Cesar Chavez

“I gave it all I had, and it’s gratifying that others seem to be receiving so well.”—Debbie Reynolds

“Politics and hypocrites are turning us all into lunatics.”—Marvin Gaye

“I’m just a movie fan. I used to go to the movies just to watch movies.”—Debbie Reynolds

“No matter how horrid a person may appear on the surface, if you dig deeper, you will find some nice, unexpected little quality.”—Brooke Astor

“I always avoid not working.”—Debbie Reynolds

“Mercy, mercy me, things ain’t what they used to be.”—Marvin Gaye

“I’m an easy laugher. I laugh all the time. You can find me on any set, because I’m always laughing.”—Quentin Tarantino

“Good music is good music whether it’s your idea or my idea.”—Charlie McCoy

“If you love to read, if you love nature and if you have a dog, you’ve got it made.”—Brooke Astor

“In giving of yourself, you will discover a whole new life full of meaning and love.”—Cesar Chavez

“If you cannot find peace within yourself, you will never find it anywhere else.”—Marvin Gaye

“Hamburgers! The cornerstone of any nutritious breakfast.”—Quentin Tarantino

BEVERAGE—Marvin Gaye “Heard It Through the Grapevine” Cocktail (see below)

ONE TO GROW ON: Search YouTube for Marvin Gaye’s soulful, nationally popular performance of “The Star-Spangled Banner” recorded February 13, 1983 at the 33rd National Basketball Association All-Star Game at The Forum in Inglewood, California. You will be proud you did.

At the end of the party, Brooke Astor thanked everyone for coming to her farm and commented on how at some point, each of those celebrating had dreamed of being in a “Winners Circle” and the heady power that might bring. She adds, “Power is the ability to do good things for other people.”

THE MARVIN GAYE “HEARD IT THROUGH THE GRAPEVINE” COCKTAIL

Stir all ingredients with ice and strain into chilled “coupe glass,” (Brooke Astor likely had two hundred coupes and they were Waterford, but anyone could/should have two, and not plastic); garnish with a frozen grape and spiral of lemon zest.