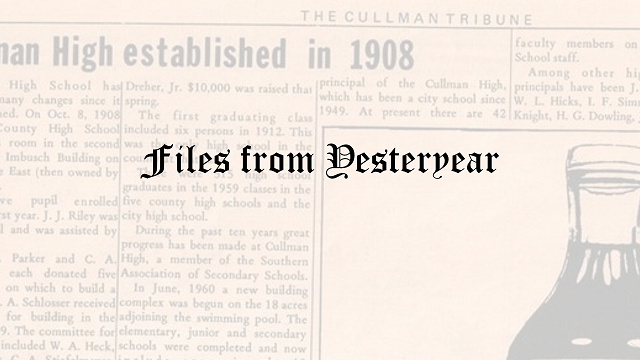 Professor and Mrs. Joe Ray, of Hanceville, were in Cullman on Saturday.

Permanent waves $1.95 and up (advertisement).

The good old days are more old than good, but memory tends to eliminate the low spots.

Mr. J.E. Gray, Senior, who was employed by the Tribune in 1888 stopped by for a visit last week. John A. Johnson was editor when Mr. Gray started work for the Tribune. He now resides in Birmingham.

Mr. Dennis Blalock of Route One Hanceville brought by the Tribune some lovely sweet potato blooms, resembling the morning glory, with a dark purple center. Mr. Blalock has three acres of the blooming potato vines and says these are the first blooms he has ever seen in many years of farming.

Pat Buttram, son of Reverend and Mrs. J.W. Buttram, of Baileyton, was seriously injured last week in California when a prop cannon exploded and hit him in the chest. Mr. Buttram is making six movie pictures a year with Gene Autry and also has a television program. Pat is a brother of Reverend Gus Buttram, pastor of the Fairview Methodist Church.

Clyde Jerome Speegle is the new son of Mr. and Mrs. Clyde Speegle. He was born on September 18th.

Mrs. Opal Wheeler has received word that her husband, Sergeant Wheeler was seriously injured in Korea on September 15th.

R.L. Baker of Baileyton has some fine Yates apples. Ad.

A 1949 Oldsmobile driven by Roy Richter of Cullman and a truck driven by Oscar Cordes collided close to the post office on Sunday afternoon. There was about $100 in damage to the Richter car about $25 to the Cordes truck.

C.J. Burkart suffered a stroke of paralysis, on his right side, as he sat at the breakfast table on Monday morning. He has worked at Kinney Brothers store in West Cullman for 25 years.

365 AMERICAN JOY-GIVERS for 2021: The JOY to the Max Birthday Party