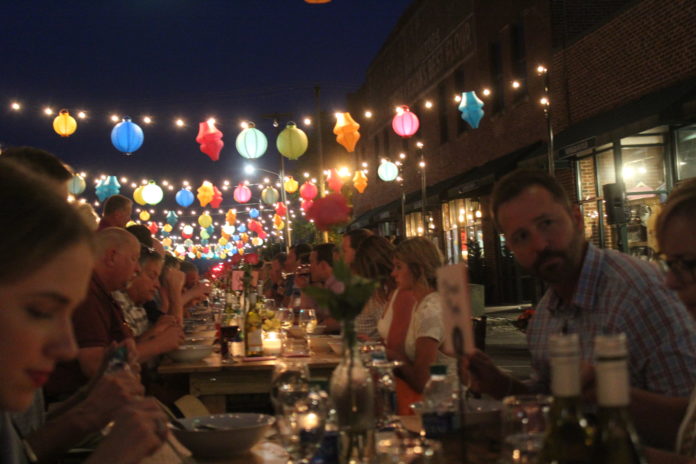 CULLMAN, Ala. – It was a perfect evening for a pretty party at the fourth annual Dinner of First Friday night in Cullman’s Warehouse District. This year’s dinner, hosted by Cullman Parks, Recreation and Sports Tourism raised money to revitalize and enhance Cullman’s Art Park with an amphitheater.

The city’s Festhalle was bustling as guests enjoyed drinks and hors d’oeuvres served at the pre-party as members of the Pilot Club put the finishing touches on the amazing dinner. The dinner was provided by Mountain Brook’s Dyron’s Lowcountry. Dyron Powell said, “You never get this cooperation among city groups as you do in Cullman. Here in Cullman it’s like, yeah let’s do it.” Vendors from Mae’s Food Hall provided the hors d’oeuvres and drinks.

The dinner tables stretched an entire block of First Avenue. The street was canopied with colorful and fun Chinese lanterns as the music of the Big Band era filled the air. The tables were set in a simple yet elegant rustic fashion including beautiful fresh flowers. The seating allowed for easy mingling and the atmosphere was casual with a touch of posh. Everyone had a great time while enjoying great food.

Mayor Woody Jacobs addressed the crowd, “You can look up and down the street and realize that this took a lot of work. You talk about team work! That’s kind of the motto of the council. It’s beautiful.” Rusty Turner with Cullman Parks, Recreation and Sports Tourism thanked everyone for coming out to support the park’s special projects. He explained, “This year the goal was to create an amphitheater at the Art Park or as what many people know as City Park. This Fall, that park will be open and ready to go and I’m happy to say with your help tonight, the amphitheater is funded so thank you very much for that.”

This year was a special year for Powell as he recently partnered with Zac Wood to become the new owners of the All Steak restaurant. Powell Said, “It’s even more of a privilege this year to be the pillar of the Cullman community, the All Steak. We are grateful to be a part of the Art Park this year.”

Following the dinner, guests carried the party back to the Festhalle for the after party to enjoy live music from Ty Gracey Music.

‘We live in a very, very special place’

‘There are still lots of good folks out there’