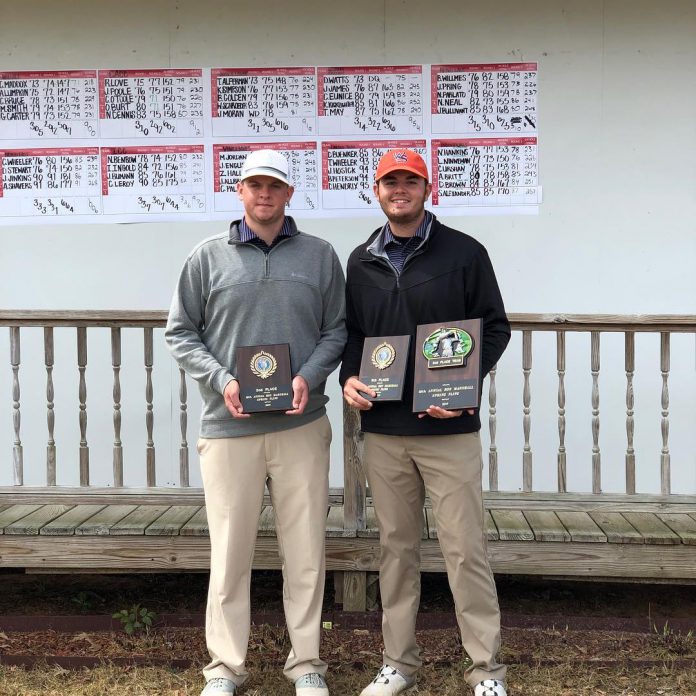 The Lions won both matches, 9-0, sweeping singles and doubles action.

For Wallace State, No. 1 Sebastian Arce, No. 2 Ethan Aycock, No. 3 Nick Hester, No. 4 Andrew Bizilia, No. 5 Zach Mastin and No. 6 Will Brackin each prevailed in singles in both matches.

In doubles action, the WSCC duos of Arce and Brackin, Aycock and Hester, and Bizilia and Hicks won in both matches.

In doubles, Putman and Crissy Cruz won 8-3 for the Lady Lions.

Both Wallace State tennis teams travel to Meridian (Miss.) on Friday as they embark on a three-match Mississippi trip.

Wallace State finished 15 strokes behind Calhoun, playing in its first tournament since the death of Hall of Fame coach Dan York.

Connor Bruce, who won the Coastal Alabama Invitational last month, was 11th overall at Goose Pond Colony with a 13 over 229 (78-73-78) for the Lions. Wallace State’s Matt Smith and Carter Goodwin each finished tied for 14th.

Wallace State heads to Foley on March 24-26 for the Glenlakes Invitational.

Wallace State’s baseball team has won 7 of its first 8 conference games after capping a series win against Lawson State over the weekend.

Robert Coleman (3-1) was the winning pitcher, and Trevor Houston tallied his first save of the season.

In the series finale, Kirk was a perfect 4-for-4 with a double and two RBIs, raising his average to a robust .542.

Dowdell added two more hits and had an RBI, Brennan McCollough was 2-for-3 with a pair of RBIs and runs scored and Collin Rogers finished 2-for-5 with an RBI and two runs scored. Hill and Haney each had run-scoring hits, and Fondren and Nate Lloyd each had a single and scored.

Dalton Hall (3-0) was the winning pitcher, and Houston registered a second save.

Wallace State continues conference play at Southern Union on Thursday. The Lions return home on Saturday at 2 p.m. for a doubleheader.