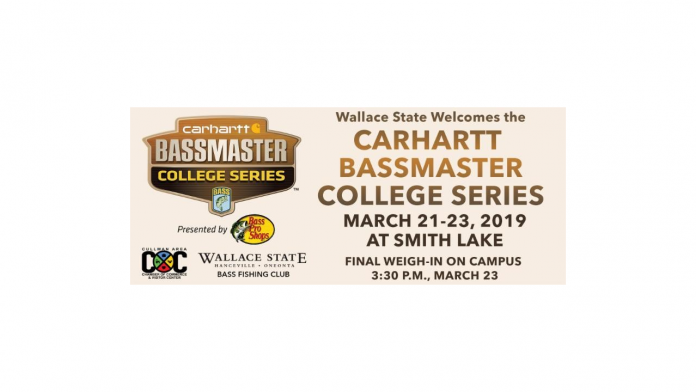 More than 100 college teams and 265 boats are expected to converge upon Smith Lake Park during the event.

“It’s special to have the Bassmaster College Series bring this tournament here. It’s great they think enough of Wallace State, Smith Lake and everyone else involved to do so. Our students have a wonderful opportunity to fish on our home lake, which not many anglers get to enjoy for an event like this. We have a great chance to showcase Wallace State and Smith Lake,” said Wallace State BASS club employee sponsor Wesley Sams of the auxiliary department.

Wallace State’s BASS Club team began six years ago and has enjoyed success throughout the series, winning a pair of Wild Card events and competing at the collegiate series championship.

Sophomore Josh Butts is among the previous Wild Card winners for Wallace State.

“It’s awesome to be able to host a tournament during my last semester here. We couldn’t ask for anything better. It’s going to be important and cool to show people what Wallace State is all about. We appreciate (Wallace State President) Dr. Vicki Karolewics believing in us and treating us as importantly as any other team or group on campus,” Butts said.

The team began the spring season two weeks ago on Lake Norman in Cornelius, N.C., marking the first tour stop.

Other collegiate tournaments are scheduled for Bull Shoals Lake at Mountain Home, Ark., and St. Lawrence River at Postdam, N.Y. The collegiate championship is set for Dayton, Tenn., in August.

Sams also credited the Cullman County Parks and Recreation Department for their willingness and support for hosting the tournament at Smith Lake Park.