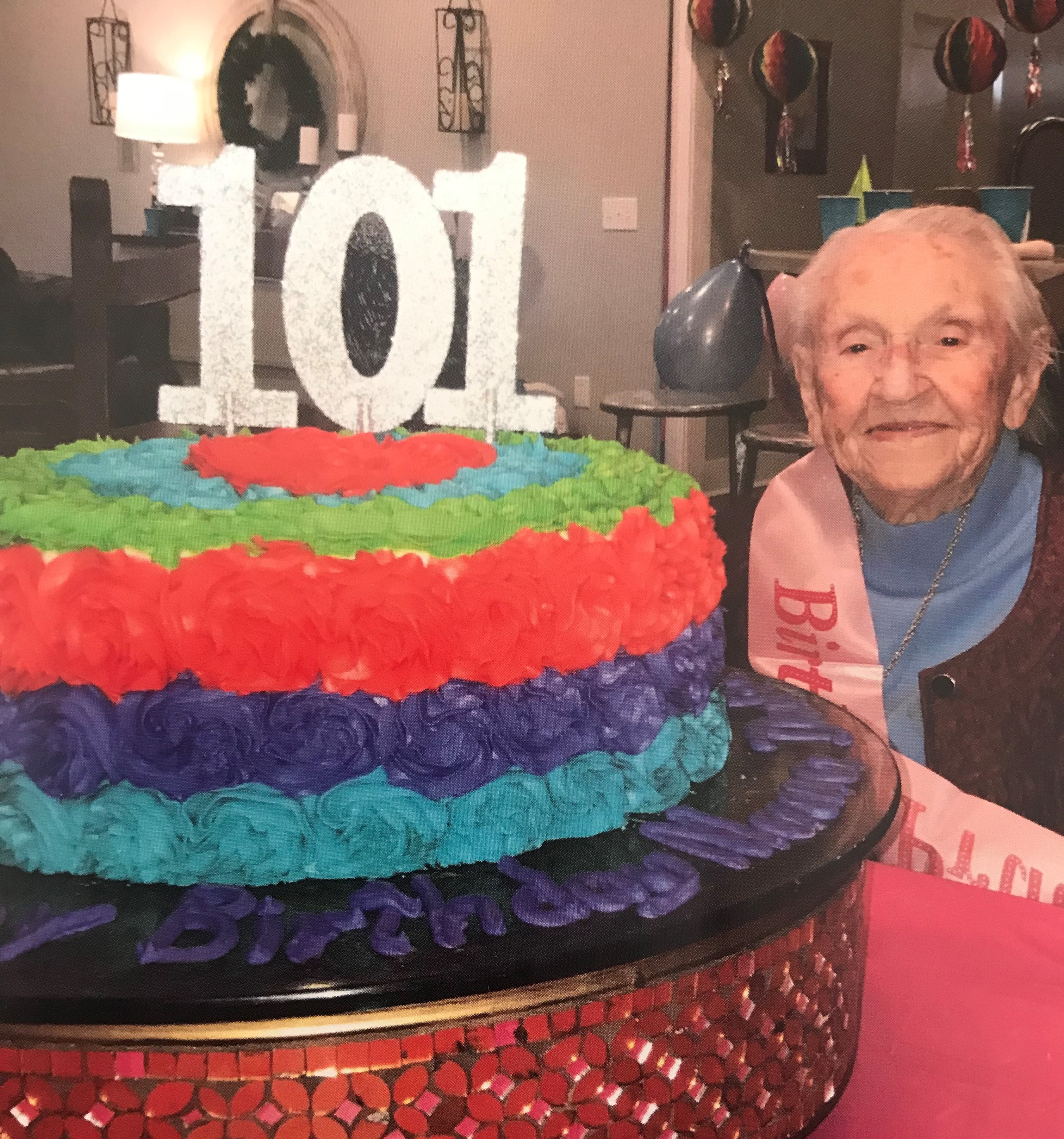 Ruth Harris Duke recently celebrated her 101st birthday with family and friends. She was born in Welti on Dec. 12, 1917 and has lived in or near the community her entire life.

Ruth’s father was just 12 years old when he moved to Welti. His was among six families who came by wagon from Georgia to settle Welti in 1904. He came with his parents and his grandparents, Sam and Lucy Harris. Sam and Lucy bought three tracts of land totaling 720 acres and began farming.

World War I was nearing its end when Ruth was born. There was snow on the ground causing the doctor to have to walk to the Harris’s home. According to Ruth, snow was still on the ground two weeks later when her daddy traveled to Georgia. The trip brought good news, as Ruth’s father learned he would not be drafted.

Said Ruth, “He was a farmer with young children. The war was closing down so he got to stay home.”

Ruth and her six siblings grew up on their parent’s farm and they worked very hard.

Ruth said, “We done everything by hand. We hoed cotton, chopped cotton, sowed corn by hand.”

Sometimes they would work the fields for other farmers and were paid 75 cents a day.

She recalled, “First time I ever got a dollar, we went and chopped cotton. We got finished a little before night. Of course, they provided our dinner. Mr. Sticher gave us $1 apiece and we said, ‘But we don’t have any change.’ He said, ‘I don’t want no change. Aren’t you satisfied?’ We said, ‘Yeah,’ and he told us to go home. That was the first time I had made a dollar in a day.”

Ruth also attended Welti School through the ninth grade. Her father needed the kids  to help on the farm and didn’t think he could afford for them to take the bus to Fairview to finish high school. Despite all the work, the kids did find time for some fun. They enjoyed candy pulling, singings and board games.

Ruth said, “We didn’t get bored. I had a friend who only had a brother and she said that she was so envious of us. My sister Millie said, ‘I’m envious of you! You get three times the dresses and no hand me downs.’”

Ruth spoke about her mother and how she was in charge of doctoring the kids. Overall, the Harris clan was healthy and only experienced ailments such as the mumps, measles and colds. Her mother was a big believer in castor oil.

Ruth laughed, “She would drain some juice out of a can of peaches and put in castor oil so we wouldn’t taste it, but we did. I didn’t like canned peaches until I was grown. They tasted like castor oil.”

Without hesitation, Ruth chose the 4th of July as her favorite holiday.

She said, “A clan of about 8-10 families would go to the river for usually two nights. We would play in the water up to our knees. There was a coal mine down there and we would get the water from the mine. The water was cooler. We would make lemonade with the water from the coal mine in a new wash tub. You see, we didn’t have ice back then and didn’t until we had electricity. I was nearly grown before I ever tasted iced tea. I thought it was terrible. I didn’t like it but I do now.

“The men would have to come home to milk the cows. They would bring back milk. They would make coffee and it was just a relaxing time. The men would sleep on the ground, but the women and children made pallets out of quilts and slept in the wagons.”

Christmas was also a fun time for the Ruth and her siblings.

She said, “As long as I stayed at home, we always had Santa Claus. Of course, we knew what it really was, but we still waited and didn’t want our presents until Christmas morning. Most of the time we got some clothing and then a toy. We didn’t have a fireplace but we had a heater. Momma would line up the chairs and put each child’s gifts in their chairs. It wasn’t much. A book or a toy, but our toys weren’t expensive.

“When my brothers were old enough, Daddy got them their guns. One year my youngest brother’s gun didn’t arrive for Christmas. Daddy felt so sorry, but the gun was there a couple days later. The boys’ biggest gift was their rifles.”

The Harris Family Farm produced almost everything the family would need. The rolling salesman came by and they could get some necessities, but from time to time, they would need to make a trip to town.

Ruth said, “I remember the rolling salesman had stale butter and he would sell it as axel grease for buggies and wagons. Anyway, it took us a couple of hours to get to town in the wagon. We would hitch the mules in town, and over the railroad tracks, we would shop at Watson’s and W.O. Kelly’s. We had to buy sugar, flour, coffee and material. We made our own clothes. One time momma found some really pretty material upstairs at Stiefelmeyer’s for 8 cents a yard. She bought 3 yards and made me and my sisters three pretty dresses. They cost 24 cents.”

They also repurposed feed sack and other sacks to make clothes and other household linens.

Ruth laughed, “I remember a neighbor of ours was outside hanging clothes and she said, ‘All I’ve got is sacks and rags and the rags are made out of sacks.’”

Times were hard for the Harris family, especially during the Great Depression.

Ruth’s daddy had bought the family a Model T prior to the Depression and Ruth said, ”It needed new tires and he didn’t have the money for tires. He stored the car and it sat in the storage until the tires rotted off of it. He eventually sold it as scrap.”

The car wasn’t the only possession the Harris Family worried about losing.

Ruth continued, “Cotton dipped to $40 a bale and daddy couldn’t pay the land note. It was $83. Daddy tried to get his brother to buy it, but he couldn’t get the money out of savings. Daddy went to the Federal Loan and said, ‘You’ll just have to take my farm. I can’t make the payment.’ The Federal Loan told him, ‘We don’t want your farm and nobody can buy it. Nobody’s got the money to buy it. You just go home and make you another crop and hope it will be better by time to make your payment.’ Next year, he did make the payment.”

As the Great Depression continued into the late 1930s, Ruth was in her late teens. She enjoyed going to the area singings at the local churches. She met a tall redhead named Hanley Duke. Hanley and Ruth dated for one-and-a-half years before marrying in 1938. She was 21 years old and Hanley was 24.

She said, “We went and found the preacher to marry us. We didn’t have big church weddings back then, and we didn’t wear the big white dresses.”

To be continued next week…Life with Hanley