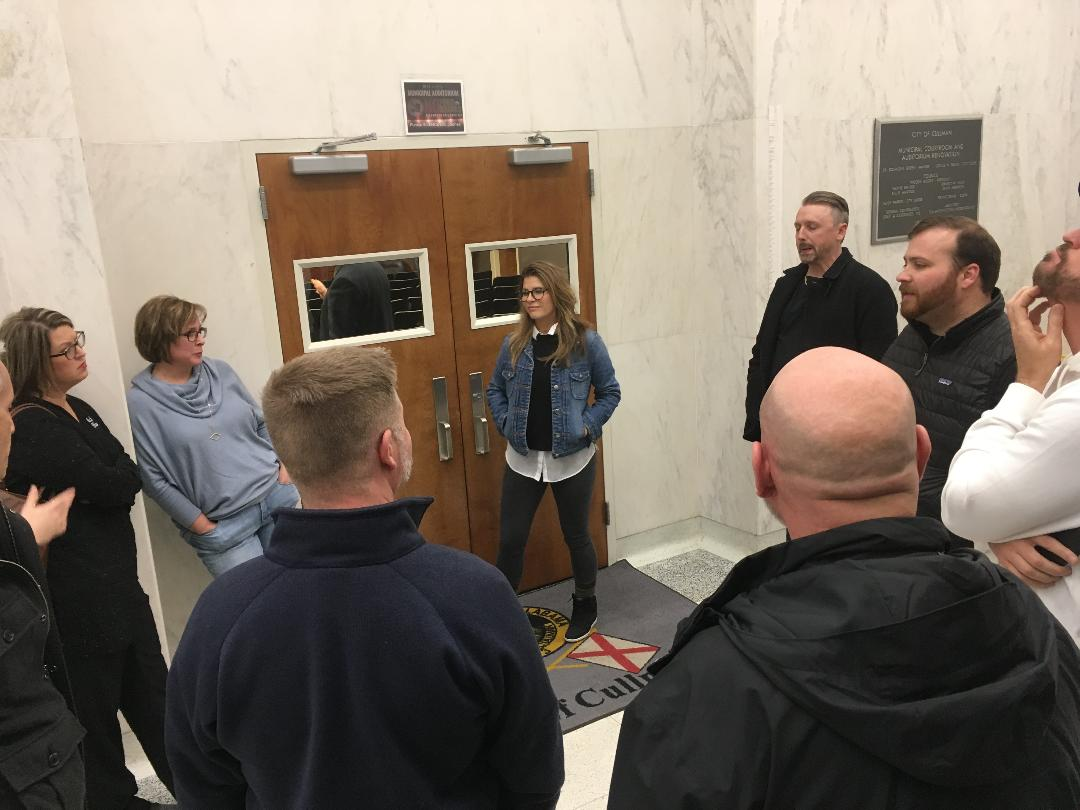 CULLMAN – On Monday evening, before Cullman’s City Council discussed and passed a modification of the city’s zoning ordinance, members got another earful about the announced new location of Rock the South (RTS) during the assigned time for visitors not on the agenda.  The announced move to private property west of Interstate 65 but within the city limits drew several protesters to last night’s and the last week’s council meetings, despite there being nothing related to the event on either meeting’s agenda.

The new RTS location, on land annexed into the city near Deer Trace subdivision and surrounded by county roads, was announced last Monday. It is a 150-acre parcel about 2 miles from Heritage Park, along County Road 469 and County Road 436 (Swafford Road Southwest), just west of Interstate 65 at 1872 Country Road 469.

Marchman spoke of concerns about the impact of the event on the county roads that surround and provide access to the site, saying, “Everybody knows there’s a spike in traffic.  When you have more traffic, you're going to increase the deterioration of the road.  You’re going to deteriorate more, and it’s going to cost a little more to maintain.  And that’s kind of one of our concerns.

“Another one of our concerns is the geometry of the road: you know, the width of the road.  It’s just–it’s not designed for that type traffic and the commercial-type traffic. And both of these roads are rural collectors.  They’re maintained also as rural collectors. I just wanted everybody to know that, you know, it’s a concern that we may have to address with this type thing going on, because it’s just a concern we’re going to have as a county, is roads.”

Local residents, mostly from Deer Trace, also returned to protest the announcement that Rock the South would relocate to a site near their subdivision.  Resident David Brown and his wife Emily Brown read a prepared statement.

David Brown described being “blindsided with the announcement of the Rock the South event being held within approximately 1,000 yards of our homes.”  He went on to say that the primary concern of local residents was “the health, safety and well-being of the residents, patrons, animals and those that travel the roads in and around the event site on a daily basis.”

Brown claimed that the city had no road or traffic studies, or reports from EMA (Cullman County Emergency Management Agency), ADEM (Alabama Department of Environmental Management), health and water departments, (Cullman County) Electric Co-op, county road department or sheriff’s office.  He asked council members if RTS had yet provided a logistics plan for events at the site.

After citing examples of things that could go wrong, he announced, “I’m simply here to put the mayor, the city council and (City) Attorney (Roy) Williams on notice that when something goes wrong, when a life is lost, when someone is seriously injured, everybody’s going to be held accountable if you choose to issue a permit without doing your due diligence.”

When Emily Brown told the council that she hoped they would be more concerned with doing what is right rather than “pandering down to the pressure of someone like (RTS Founder) Shane Quick,” Folsom warned her not to engage in personal attacks.  She went on to point out that the Bonnaroo Music and Arts Festival, a similar event in a similarly sized community in Tennessee, cited by Quick previously as an example, has seen 13 deaths in the last 17 years, the most recent related to drugs, and that the event has been implicated in human trafficking cases.

Deer Trace resident Stephen Speciale continued the comparison to Bonnaroo, asking the council if the Cullman area didn’t already have enough of a drug problem.  He echoed the comments about deaths at the event, then asked the council if there is an “independent oversight body” with authority over the city personnel involved in this project.

Speciale concluded by asking, “Is revenue from two days more important than ethics and safety for the entire 83,000 in Cullman County?”

RTS producers Quick and Nathan Baugh addressed the council as well, last night and last week, and met informally with residents afterward to talk about the move.

Quick told the council and audience, “The reality is: we’re not here to apply for a permit tonight.  We are doing our due diligence. We are hiring professionals just like (traffic engineer and owner of Skipper Consulting) Daryl Skipper, who’s right there, to do the due diligence on the roads, on the site, on health management, everything.

“The goal is to move this from a park that has over 30,000 kids on it every single year, actually, the highest densely populated area in the city of Cullman with children.  So, Bonnaroo was always a comparison about the amount of human beings, so the people–and I’ve heard so many negative things about the patrons of RTS, who are thousands of Cullman residents.  These are law-abiding Americans who pay their taxes; good human beings. They’re not filth, they’re not trash. And it’s pretty nasty to hear the way–some of the things I’ve seen and heard about these people who go to the festival.  They’re good people.

“But the reality is, we’re doing our due diligence, we’re hiring the people we have to hire to present this to this amazing council and mayor, and once that is done, we’ll present that to them.  But we’ve not done that yet. And when we do do that, and we agree that we feel comfortable with the festival, we’ll present that to these guys, and they’ll make their decision, and that’s the bottom line.

“But we’re not here tonight to ask for a permit.  There will be a time when we will do that, but that’s not tonight, and we’ll keep working.”

Skipper also came forward and talked about how his company, which handles traffic issues for Auburn University home football games and for Regions Field and the civic center in Birmingham, is working to find the best routes to move patrons and equipment to the event site, along with seeking ways to maintain good traffic flow for local residents.  He stated that he has requested meetings in the next week with the Cullman County Commission, Cullman County Sheriff’s Office, Cullman Police Department and fire chiefs, EMS and city administration to discuss concerns and ideas.

The Tribune live streamed last night’s meeting; you can view the entire council meeting at www.facebook.com/CullmanTribune/videos/589516564826393/.