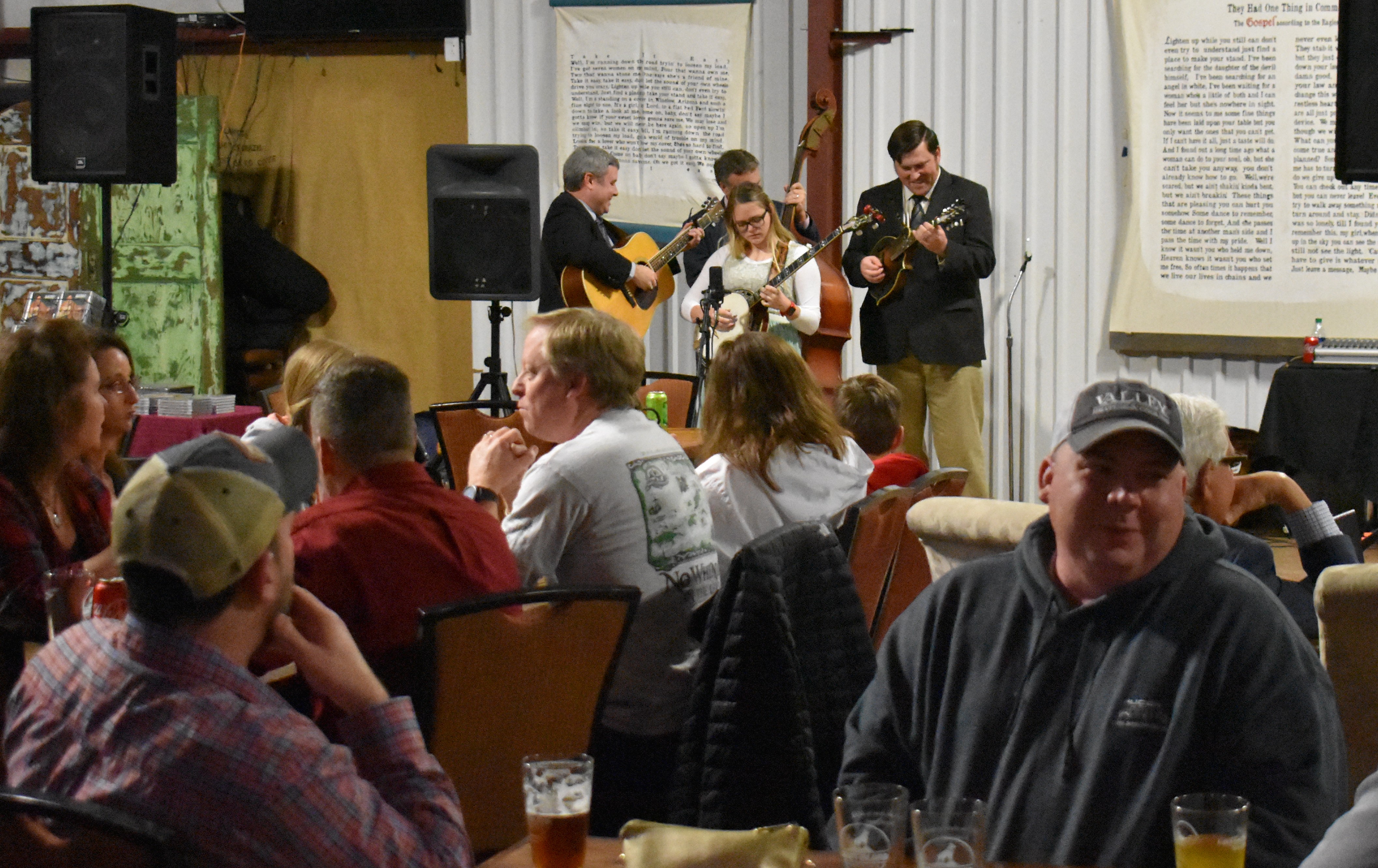 Alan Sibley and the Magnolia Ramblers cranked up the crowd during Saturday evening’s fundraiser for Saving Forgotten Warriors at Goat Island Brewing. (W.C. Mann for The Cullman Tribune)

The Tribune dropped by to catch the show, to catch up with SFW director Jeremy Hogan and to find out how 2018 went, as well as what’s in store for the group in 2019.

Hogan shared, “2018 was probably our most roller coaster of a year.  We had a bunch of ups and a bunch of downs. We were able to do, I think, four different major projects.  We still did our transportation, but if everybody was paying attention, our van got totaled like right in the middle of summer, so we ended up losing our transportation vehicle.  So, we’ve been fighting that for the rest of 2018.

“Other than that, it’s been just as well as all the other years.  We’ve had a plethora of folks come out to see us, and started getting more sponsors, started getting more people behind what we’re doing; we’re actually able to help a little bit more than what we have been.

“We’ve actually started doing meals–not necessarily like Meals on Wheels–but we’re taking elderly veteran couples here in the community.  We have a couple that are in need of daily food because they can’t cook for themselves, but they don’t quite meet the requirements for Meals on Wheels. So we take them food and stuff like that, daily.

“2018 was really a learning year for me, so I’m hoping 2019’s better than what it was.  Every year it gets better, and it’s gotten to that point where, right now, it’s more of a concern of being able to keep up with the role of the resources and the needs, and getting everybody still behind it.

“The newness has worn off of SFW.  You know, we’re three years into it, so everybody’s starting to hear about what we’re doing.  That’s great on one end, but I don’t want them to think that we’re still moving and we’ve gotten to that point where we’re on autopilot, because we’re not.  We have a lot of work to do. We have a lot of growth to go and still a lot of things that we want to do for our veterans, not just in Cullman County, but in the surrounding area.  I mean, I’d love to be able to help all the veterans in the state of Alabama, if it came down to it.

“I’m looking forward to 2019.  I’m praying that we can get some more active participants in the community to help us out with SFW and the things we’re doing daily; and that’ll help project us through 2019 anyway.  I see 2019 being a really good year for us, in the sense of that, since we’ve gotten so many people behind us. I mean, now we have people doing fundraisers and stuff for us, instead of us having to do the fundraisers, so it’s been great!”

SFW provides many free services to Cullman area veterans in need, including:

Said Hogan, “Pretty much, if you need it and it’s something you can’t facilitate yourself, give us a call.  And if we can facilitate it, we’ll go from there. If we can’t, we’ll look for other resources. I mean, we try to go all the way out.  We don’t stop till we get some good answers.”

Over the last three years, SFW has provided free services to more than 580 area veterans, including multiple services to many of those.

Hogan concluded, “I really do appreciate the way Cullman County has been. For the last three years, they’ve came up behind us and really supported what we’re doing, and they believe in what we’re doing.  And I believe, as patriotic as this community is, and as God-fearing as this community is, it’s what made this so great. And I’ve really enjoyed it.”

Hogan reported that SFW is well-stocked with clothing.  The group could use non-perishable foods, as well as gift cards for food purchases; tax-deductible financial support for the nonprofit is always welcome.  When he encounters needs that require extra resources, Hogan posts notices on the group’s Facebook page.

To help out, visit www.facebook.com/Savingforgottenwarriors.org/.