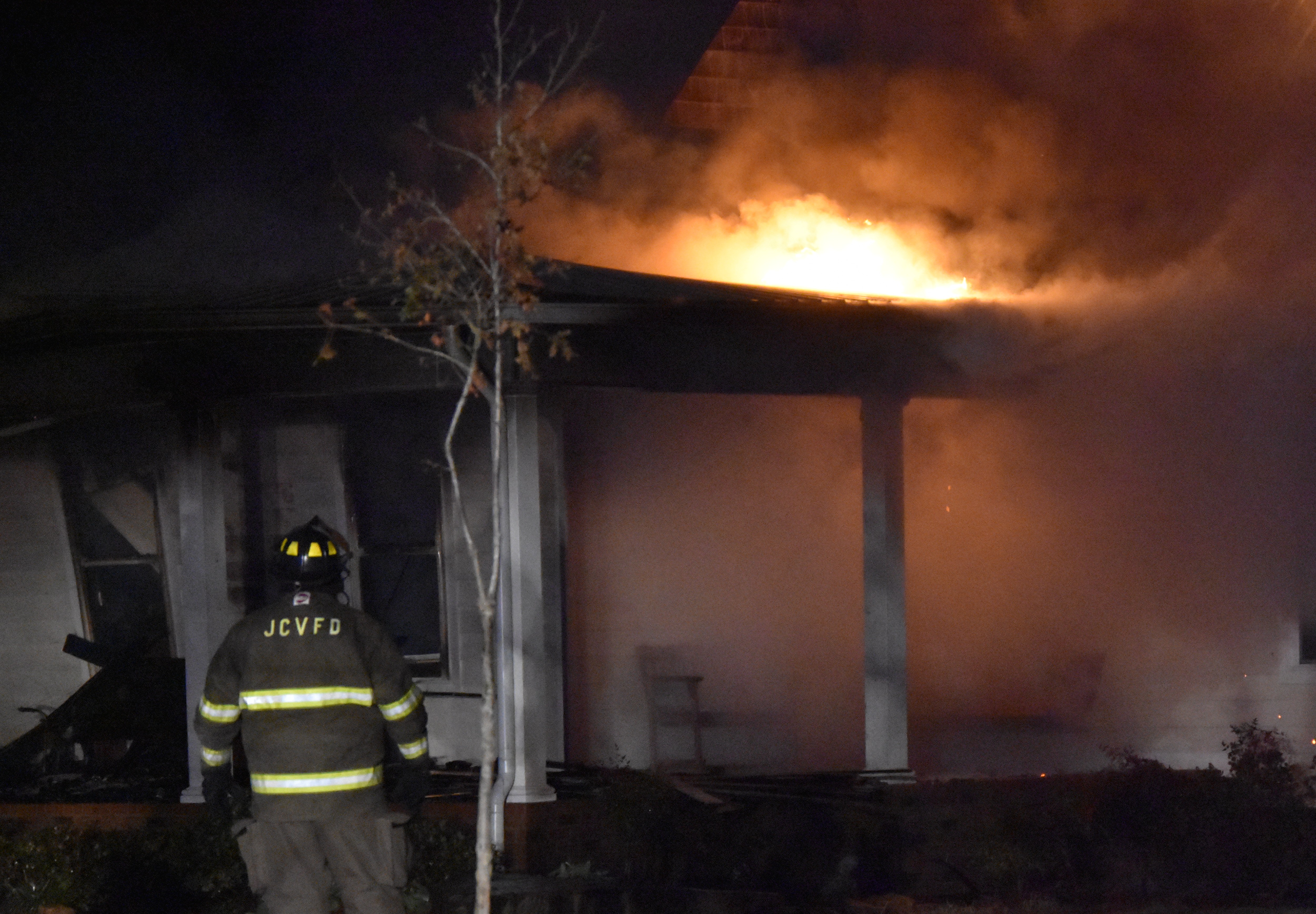 A Johnson's Crossing firefighter looks on, as the blaze burns three hours after the original call at approximately 5:45 p.m. Monday evening. One person was injured in the fire, which destroyed a family's home. (W.C. Mann for The Cullman Tribune)

WHITE CITY – On Monday evening, fire broke out at a home in the 900 block County Road 622 in the White City community near Hanceville.  The Johnson’s Crossing Volunteer Fire Department was the first to respond, followed by units from Hanceville Fire and Rescue, Cullman Fire Rescue and Cullman EMS.  The residents escaped the home, though the father, identified by multiple sources as Billy Atchison, was transported to Cullman Regional Medical Center for treatment of burns. No other injuries were reported.

According to Hanceville Mayor Kenneth Nail, who was streaming live from the scene, the incident began with a Christmas tree that caught fire while Atchison was building a fire in the fireplace.  The tree was engulfed quickly, and the fire spread rapidly through the house.

Fire chiefs on the scene told The Tribune that the home will likely be a complete loss.

From Nail to Councilman Johnny Cook at Cullman City Hall, immediate calls went out, asking people to pray for the family and to be prepared to help with clothing and other things they might need. The family has at least one child at Cullman High School, which is collecting donations. Contact the school for more information.

Hanceville Fire and Rescue posted on social media Tuesday: “Last night's fire was the home of Billy Atchison the North Alabama Territory Manager for SunBelt Fire Equipment. SunBelt Fire supplies Hanceville Fire and Rescue and many others with life-saving equipment for our departments. Their house burned to the ground, but everyone made it out alive. Billy had some second-degree burns on his back and was released from the ER last night. The exact cause of the fire is not known at this time. Hanceville Fire and Rescue will be collecting donations for anyone who feels lead to donate. Billy's family has school-age children and have lost everything. Please feel free to call us at 256-352-5544, email us at call911hancevillefire@gmail.com or stop by Hanceville Fire Station 1 anytime at 119 Collins Ave Hanceville, AL 35077. And please pray for this family in their time of need.”

A GoFundMe page has also been set up for the family. Find it at www.gofundme.com/4r6dv5-atchison-family-fire-fund.