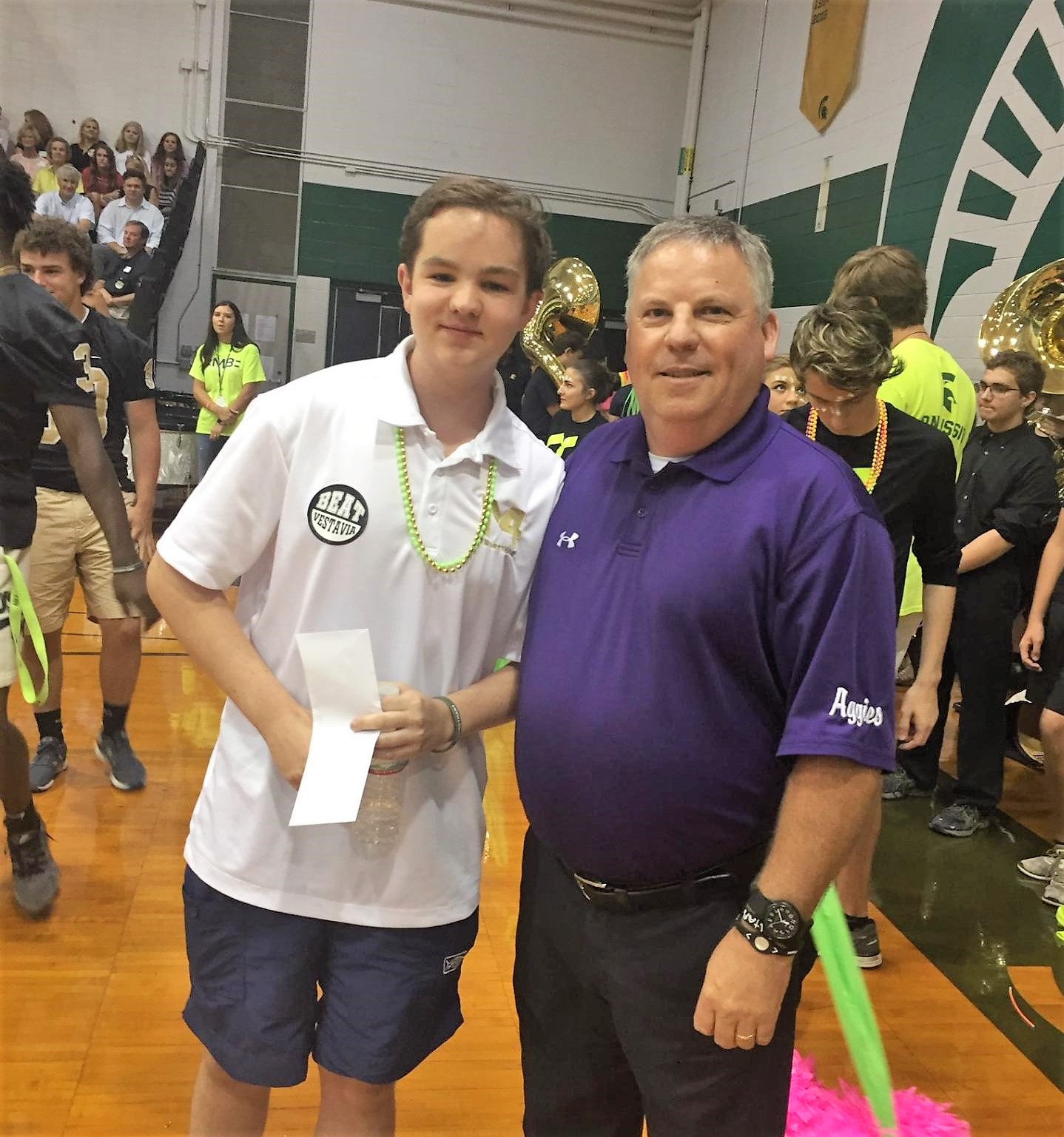 MOUNTAIN BROOK – Sean Fredella was just 2 years old in 2003 when he faced his first of three battles with lymphocytic leukemia. Then, in 2011, he was diagnosed with cancer for the fourth time with an extremely rare adult tumor known as an esthesioneuroblastoma. Sean had 22 cancerous lymph nodes in his neck. Four battles with childhood cancer prior to junior high is why Fredella has been nicknamed “the boy born to fight cancer.”

Fredella is 18 years old now and a senior at Mountain Brook High School. He created a movement several years ago after learning that only 4 percent of the National Cancer Institute’s annual budget is dedicated to childhood cancers. Fredella knew that wasn’t good enough and realized his purpose was to change that.

Hardman explained, “I always keep up with Mountain Brook football because of Fairview alumnus Chris Yeager being their head coach. He’s a great guy and I have known him since I was a kid.”

Hardman learned the gold helmets were to be worn to promote pediatric cancer awareness, saying, “The article talked about Sean’s life and I was shocked that only 4 percent went to research childhood cancer. I was inspired by this young man’s courage and wanted to support him, so I had a few ideas.”

Yeager said of Fredella, “He is a superhero. While some kids have hobbies, Sean raises money and fights for cancer awareness. Sean started a movement and the hashtag #morethan4. He reached out to NCAA officials, college athletes and professional athletes to help in raising awareness.”

Fredella is a quiet guy by nature, but he recently told Yeager, “When you face cancer and death four times, there’s not much that intimidates you.”

Hardman began reading all he could about Fredella and watching YouTube videos of Fredella’s presentations and was  “blown away.” Hardman recommended a particular video: www.youtube.com/watch?v=TG5PLE2KK68

He continued, “This story tugged at my heart and I knew Fairview could help. We had two hat days. Kids could wear their favorite hat at school if they donated. We passed a hat at Fairview’s middle school football games. We raised $820 for Sean’s #morethan4.”

Recently, Hardman traveled to Mountain Brook and was introduced by his lifelong friend Yeager at the school’s pep rally.

Hardman recalled, “The pep rally was wild! They were getting fired up for their game against their biggest rival Vestavia Hill. The parents were even at the pep rally! Sean had been selected as an honorary captain for the game, but he was unaware of why I was there. Chris introduced me, and I was able to present Sean with the money raised by the Fairview community. It was awesome, and Sean was very moved. I felt honored to meet Sean.”

After the pep rally Fredella went to see Yeager in his office.

An emotional Yeager said, “Two things from that day are etched in my mind forever. Sean said to me after receiving the gift from my hometown, ‘It really encourages me that so many people care. Their encouragement encourages me to keep working.’ That night at the game, Sean was honorary team captain and he brought pediatric cancer patients from both Mountain Brook and Vestavia, our biggest rivals, and Sean reminds everyone that their fight is so much bigger. As we run on the field, Sean is holding these kids’ hands. Some had ports or had lost their hair. One child looked at me before this huge game and said, ‘This is the happiest day of my life.’ That moment was so profound. Reminds me there are things more important than football. I need that.“

Hardman said he hopes that other area schools will be inspired to join in on the More Than 4 movement by raising awareness or raising money for Fredella’s cause.

Yeager said, “Sports brings people and communities together. Sean reminded us of this and to have my hometown support this young man and his efforts was special. Marty is special and a really great guy.”

To learn more about Sean Fredella and the More Than Four movement, visit www.morethan4athletics.com.