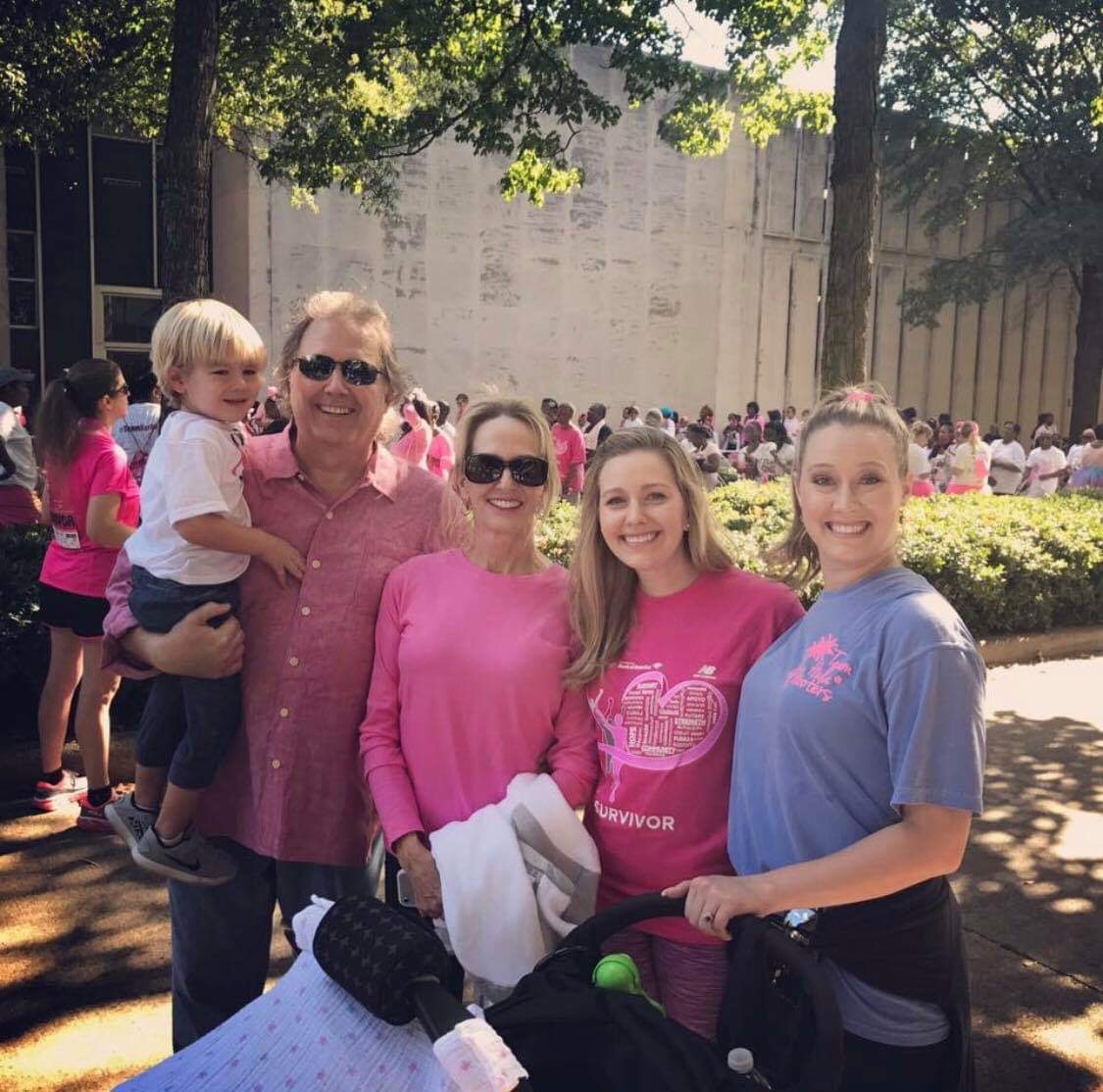 “Race for the Cure 2016 with (from left) my son, Hugh; dad, Don Marecle; my mom, Christy Marecle; (me); my sister, Haley Marecle; and my daughter, Vivian, in the stroller” (courtesy of Lindsey Marshall)

On March 16, 2015, Dr. Lindsey Marshall and her partner Dr. Katherine Stidham celebrated the opening of their Signature Smiles dental practice. Opening a business takes months of hard work, but for Lindsey, her greatest battle was much more personal.

Lindsey is a 2003 graduate of Cullman High School. After high school she attended Birmingham Southern. She was a member of Chi Omega sorority. Her junior year, one of her sorority sisters introduced her to Tyler Marshall and they began dating. Lindsey graduated in 2007.

Tyler was accepted to UAB where he became a physician while Lindsey decided that dentistry was her calling. Lindsey’s father is a surgeon in Cullman and Lindsey knew she wanted to work in the medical field, too.  While at UAB, Tyler and Lindsey were married on April 10, 2010. She graduated from the UAB School of Dentistry in 2011 and joined Coleman Dental Group in Athens.

In 2013, Tyler and Lindsey were thrilled to learn they were expecting a son. Hugh Marshall was born in January 2014, and soon after, Tyler was chosen for a sports medicine fellowship at the Cleveland Clinic in Ohio. All of their hopes and dreams seemed to be falling into place.

As the daughter of a surgeon who spent his career providing care to women with cancer, Lindsey was very body conscious and perhaps knew more on the subject than most. As a new mother, Lindsey was breastfeeding her son.

She explained, “There were some changes in my body, but all women experience changes after giving birth. Breastfeeding can cause weight loss and I was losing weight. I was losing a substantial amount of weight. It was to the point where my friends were expressing their concerns.”

She continued, “Katherine Stidham and I talked about opening a practice in Cullman. We are both Cullman girls although we never knew each other prior to being in the same bay in dental school. We joked in school about the two Cullman girls opening a clinic but now we wanted to turn it into a reality. Around the same time, in November 2014, I found a lump in my left breast. I still convinced myself that it was normal due to having a baby and breastfeeding. I was only 30 years old.”

With the Christmas holidays and Hugh’s first birthday upon her, she didn’t tell anyone and concentrated on enjoying the festivities. She rechecked the lump and found that it had grown. She described the lump as “almond-sized.”

Lindsey explained, “I did have my husband check it and he found it concerning but it is not his area of medical expertise. I know this might sound crazy having come from a medical family, but I didn’t want to concern everyone over nothing and I’m a very modest person. I think my parents left on a Sunday and I finally called my dad the next day. I did make an appointment with an OB/GYN in Cleveland and the doctor performed a manual exam and scheduled me for a mammogram ultrasound.”

The mammogram was scheduled very soon after.

Lindsey recalled, “I remember being in a room of women who were older and feeling awkward sitting there at just 30 years old. After the mammogram, I watched as everyone was sent home, but I was still sitting there waiting and waiting. That was the when I started getting very worried. I called my mom while I was waiting because I was getting scared.”

She continued, “I thought it was strange that the ultrasound tech was looking in an area other than the lump. The tech felt the lump was a complex cyst, but the different area was more concerning. At this point a biopsy was scheduled for the following week.”

Lindsey called her dad again and he explained that based on what they knew, it could be 10 different things with nine of those being benign.

The biopsy was scheduled that Friday and the pathology report was expected to take a few days. On Monday Feb. 9, 2015, as Lindsey was in the shower, she heard her phone ringing.

She said, “I raced to get out and to the phone, but the call had gone to voicemail. The message was from the pathologist asking me to please return the call. My first thought was, ‘This can’t be good.’ I just figured if the results were good they would have said so in the message. I called the office and heard from the nurse, ‘I’m shocked. You are only 30 but you have ductal carcinoma.’ I have breast cancer. The rest of that day is a blur. I remember feeling numb and thought about my son.”

Lindsey got off the phone and called her mom, her husband and her dad. Her dad asked, “Invasive or noninvasive?” The answer was unknown. Her mother flew to Cleveland the next day and Lindsey had an MRI on Feb. 11. Afterward the pathologist was waiting and said, “The good news is the cancer is concentrated in the left breast and is noninvasive. The bad news is the cancer is in 70 percent of the ducts in the left breast.”

Everything was happening so quickly, and Lindsey was soon meeting surgeons, oncologists, plastic surgeons, geneticists and other professionals. Lindsey knew what she wanted.

“I wanted it gone! I knew the cancer was concentrated in my left breast,” she said, “so I was adamant about having the most aggressive  procedure: a double mastectomy. I did not want chemo or radiation.”

While Lindsey was battling the breast cancer diagnosis and preparing for her upcoming surgery, she was still busy with the new dental practice scheduled to open on March 16, 2015. She flew home to help with those preparations and to see family and friends. With the exception of a few very close friends and family, she did not reveal that she had breast cancer.

Lindsey flew back to Cleveland and just 10 days prior to the grand opening of Signature Smiles, she underwent a double mastectomy. Lindsey’s mother stayed with her for many weeks.

Lindsey said, “I wasn’t allowed to lift anything. I couldn’t lift my arms above my head. The most difficult thing was I could not lift my son. He was just a year old and he couldn’t understand why his mother was suddenly not picking him up or holding him. My mother was my rock, though. She just came in and took care of everything.

“Being in Cleveland during my recovery had its advantages. I was able to go through it without being seen and I didn’t have to talk about it. Nobody knew me in Ohio. I weighed only 93 pounds and I didn’t have to feel self-conscious as I went to run errands. However, the emotional support from everyone back home in Cullman could be felt! I am forever grateful, and it still makes me tear up. People were praying for me and many didn’t even know me.”

She said of this setback, “This was actually one of my lowest points. I felt like I had handled everything well and pushed through. I had been strong, and I had made it to the end. It just didn’t seem fair.”

After antibiotics for the infection, Lindsey was back and feeling great. On July 15, 2015, Lindsey and her family were able to move to Cullman. Lindsey was able to join Katherine and their dental practice. Her tests showed clear margins, and as of March, she has been three years cancer-free. She learned her cancer area was 3cm by 4cm by 5cm.

For Lindsey, she said her lesson was: “Silver linings! If not for a benign cyst, I would have not known about the cancer. I have a dad who is a surgeon, so besides his support, I believe I was prepared throughout my life to handle the situation more than others might have. My sister works for the American Cancer Society and was able to help me so much. My mom!! What would I have done without her being able to help us? Also, a study came out a year prior to my diagnosis that revealed that radiation was not beneficial in the type of cancer I had. Had I had cancer a year earlier, I might have had to undergo radiation. So many silver linings.

She continued, “Now, I am healthy and follow up with dad to make sure everything is clear. All the genetic tests show my cancer was not caused by genetics. I had no genetic markers, and in September 2016, Tyler and I had our little girl, Vivian.”

Lindsey urges women, “Trust your gut. If you are worried about something to do with your health, see your doctor. You aren’t bothering anyone. If it’s nothing, good! That’s what you wanted to hear anyway. If it’s not good, hopefully it can be caught early. Stop and appreciate the now. Before this, I was a scheduler and tried to do it all. Not anymore. I do what I can, but some things are just going to have to wait. Spending time with my babies, my husband and loved ones is much more important than all that other stuff. “