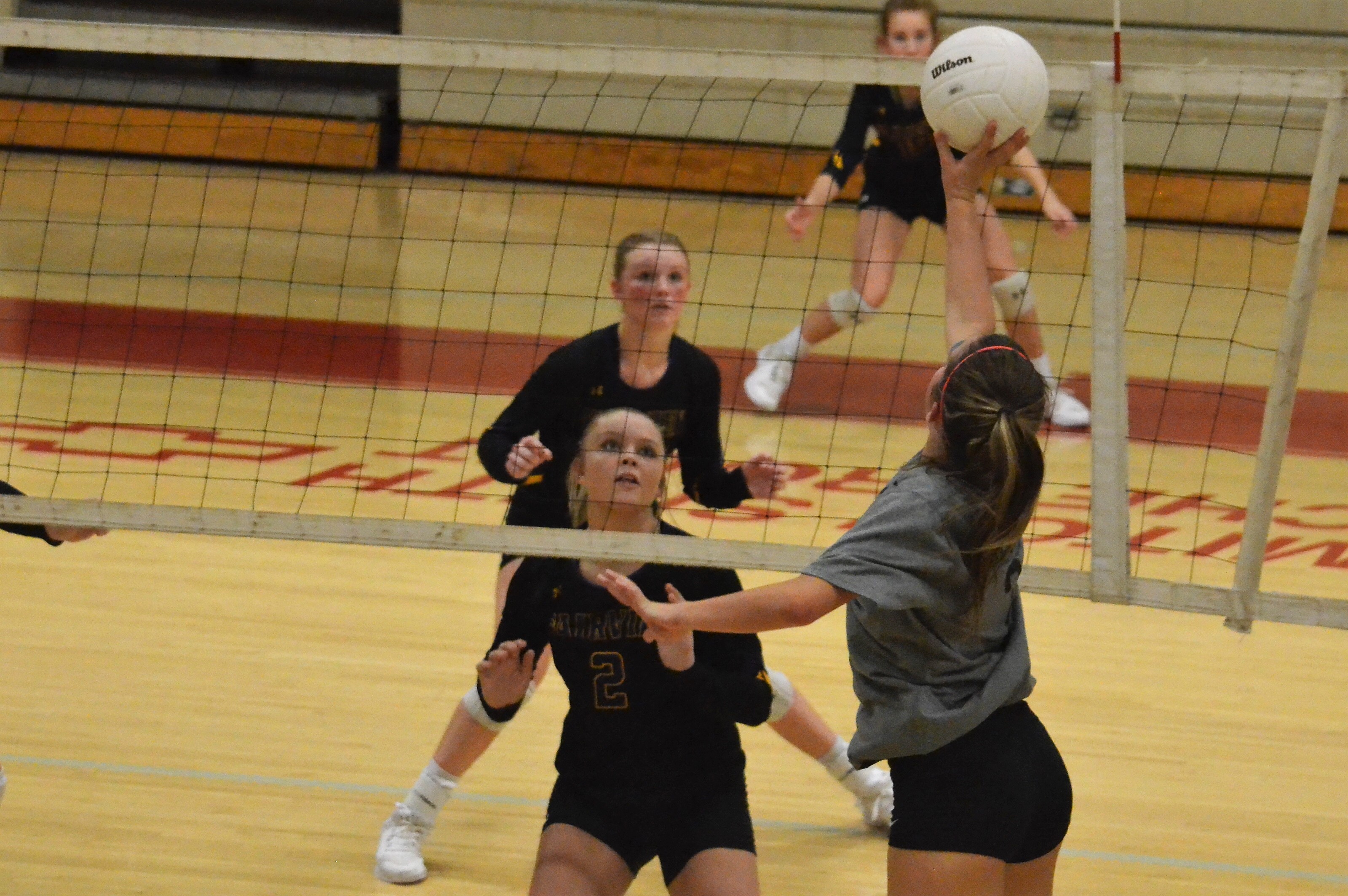 Cullman's Gracie Apel (2) tips one back over the net in the Lady Bearcats' win over Fairview Tuesday night. Also pictured, Fairview's Katie Ball (2) (Nick Griffin for The Cullman Tribune)

GOOD HOPE – The Cullman Bearcats and the Fairview Aggies made the short trip to Good Hope Tuesday afternoon for a tri-match. The first match of the day was an area showdown between the Lady Aggies and Raiders.

Fairview got out to a 1-0 lead in the match after taking the first set 25-19 thanks in large part to big performances from Tess Bailey and Katie Ball. Bailey posted a block and three kills while Ball added an ace and three more kills. Skylar Tucker scored two aces for Good Hope in the set while Madalyn Williams collected three blocks and two kills.

The second set also ended with Fairview on top, this time by a score of 25-20. Jesse Kent had a solid set for the Lady Raiders, picking up three blocks while her teammate Christian Smith served up a pair of aces in the loss. Daisy Manasco led the way for the Lady Aggies in the second set, racking up seven kills and two blocks while Bailey added three more kills and an ace in the win.

The third set between Fairview and Good was the most competitive of the entire evening as it took a little extra time to settle things. The Lady Raiders climbed back to take the third set 27-25 behind a three-ace performance from Abigail Orton and three big kills from Alee Jackson.

The fourth set saw the Lady Aggies put the match away 25-20 thanks to another six kills from Manasco and three kills and an ace from Ball. The 3-1 match victory was a big area win for Fairview as we approach the home stretch of the season. Fairview will be back in action when they travel to Gardendale High School this Thursday for a quad-match with Mortimer Jordan, McAdory and Gardendale.

After the showdown between Good Hope and Fairview, the Lady Bearcats made their way to the floor to take on the Lady Aggies.

Cullman took the first set of the match 25-16 thanks to a solid defensive performance all around to go along with a block and three kills from both Kaina Thomas and Caroline Hollingsworth up front. On the other side of the net, Ball and Manasco each collected four kills for Fairview. The second set was a much tighter contest, but the Lady Bearcats ultimately edged out the 25-22 win to end the match 2-0. Thomas and Hollingsworth gave the Lady Aggies problems once again as they racked up four and five kills in the win, respectively.

The Lady Raiders made their way back onto the court next for their matchup with Cullman to close out the tri-match. Despite some standout performances on Good Hope’s side of the net, the Lady Bearcats picked up the 2-0 win in the final match of the night.

Cullman took the first set with a convincing 25-13 win behind four aces from Ashlen Heatherly and three more kills from Thomas up around the net. Abigail Orton was effective up front in the first set for Good Hope, posting three kills in the loss. The Lady Raiders put a scare into Cullman in the second set but came up short 25-20 to close out the match. Thomas added another four kills to her night in the second set while L.G. Evans collected a block and two kills up front.

The Lady Raiders will be hosting another tri-match this Thursday when Oneonta and Vinemont come to town and the Lady Bearcats will be back on the floor when they travel to Curry on Oct. 8 to face the Yellow Jackets.