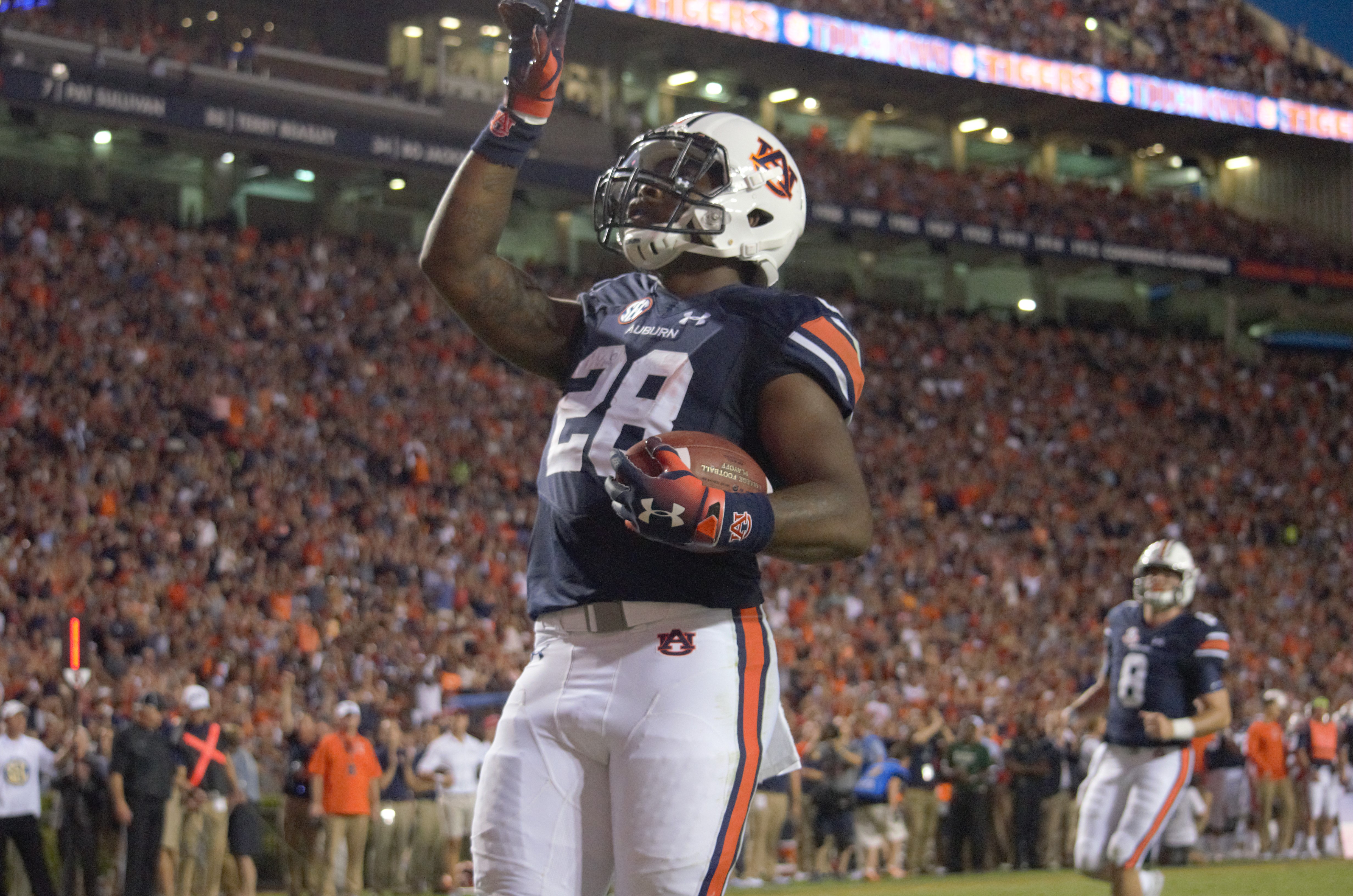 JaTarvious "Boobie" Whitlow scores the first touchdown of the night in Auburn's 34-3 win over Arkansas. (Nick Griffin for The Cullman Tribune)

AUBURN – It was defense and special teams that carried the night for Auburn on Saturday as the Tigers put down Arkansas 34-3 in a sloppy SEC matchup.

Auburn forced the Razorbacks to punt on the opening possession of the night and Ryan Davis returned it all the way down to the Arkansas 27-yard line. A few plays later, JaTarvious Whitlow put the Tigers up 7-0 early with a 5-yard rushing touchdown. Both defenses held their own for the rest of the opening quarter and safety Daniel Thomas recovered a fumble for the Tigers, running it all the way down inside the Arkansas 2-yard line. Anders Carlson knocked through an 18-yard field goal a few plays later to put Auburn up 10-0 going into the second quarter.

Auburn’s offense continued to struggle in the first half. The Tigers’ problems on the offensive front kept them from moving the ball effectively and once again, the defense was asked to carry the load. Auburn was forced to punt on its next two possessions and didn’t find the end zone again until the final minute of the second quarter when Jarrett Stidham scored with his legs from 4 yards out. Javarius Davis picked off a Razorbacks pass in the final seconds of the half to send Auburn into the locker room with a 17-0 lead and the momentum.

The Tigers offense went three-and-out to start the second half, continuing its sluggish night. Arkansas finally got on the board on the ensuing possession with a 29-yard field goal, but Auburn answered quickly on special teams. Noah Igbinoghene took the ensuing kickoff 96 yards for another Tigers touchdown that stretched the lead to 24-3 early in the third.

After two more punts from Auburn, Whitlow ran in his second touchdown of the night from 15 yards out to put the Tigers up 31-3 midway through the fourth quarter. Whitlow led the Tigers in rushing with 49 yards and two touchdowns on 13 carries. Auburn’s defense capped off its strong night by forcing two more punts from the Razorbacks and Anders Carlson put the final points of the night on the board with a 43-yard field goal with less than three minutes to play.

The final score doesn’t show it, but Auburn’s offense still has a lot of improvements to make before it faces the elite teams remaining on the schedule. The Tigers went for just 91 yards on the ground, one of the lowest totals in the Malzahn era, and 225 yards of total offense. Two turnovers and explosive plays on special teams allowed Auburn to pull away from the Razorbacks this week, but the offense will have to start clicking if the Tigers plan to make any noise in 2018.

Auburn will have a chance to polish things up next week when they host the Golden Eagles of Southern Miss.