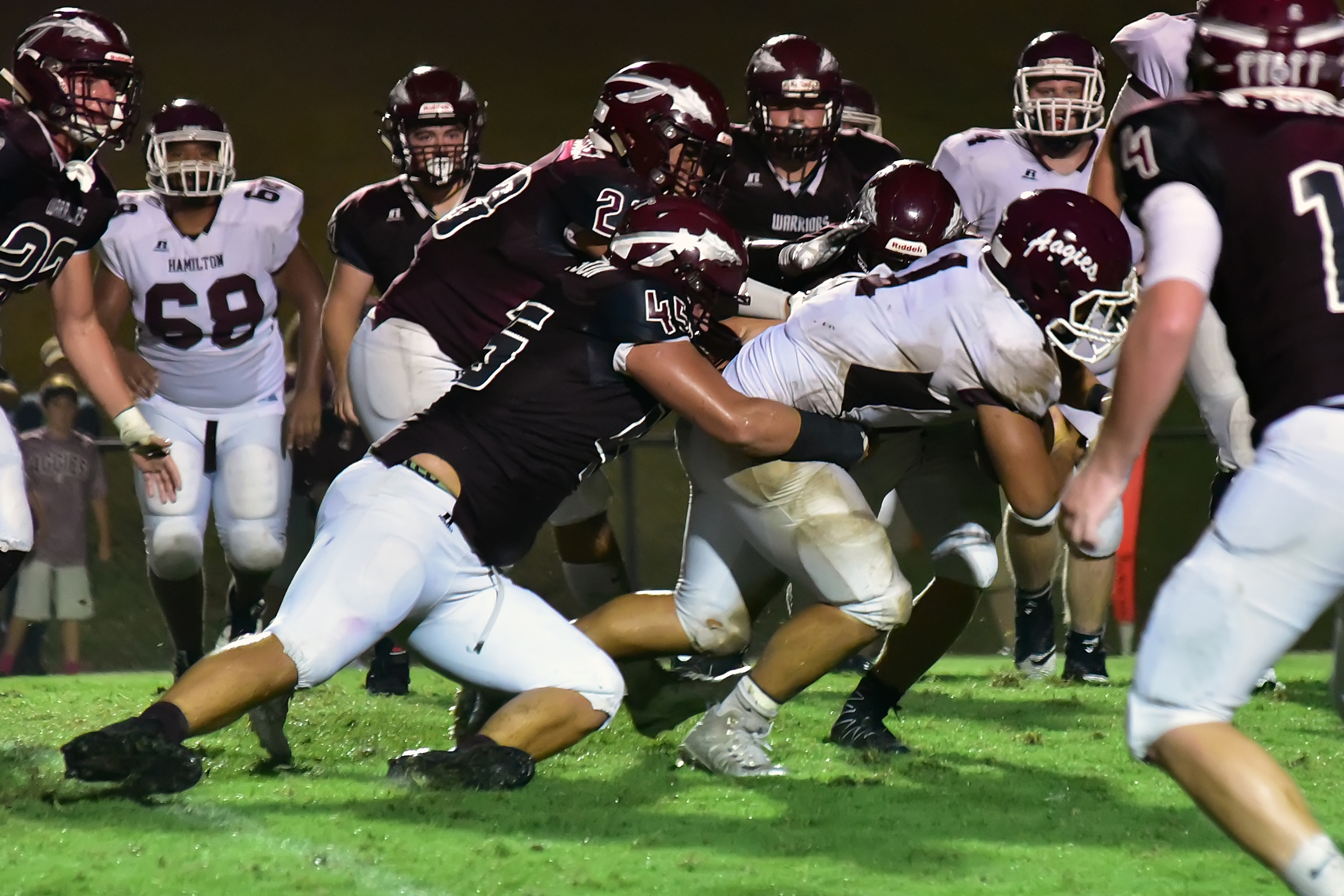 West Point’s defense forced the Aggies to punt on their first possession, the first of only five punts that happened in the game. And on just their third play of the series, Rylan Jones found Kolton Sapp for a 52-yard touchdown to put the Warriors on the scoreboard with 9:23 remaining in the opening quarter. Back-to-back punts by both teams saw Hamilton with the ball at the 48-yard line, and Jathan Jackson gained all 58 yards on the ground on the drive, including a 4-yard touchdown, to tie the game at 7. Jackson wound up finishing the game with 304 yards on the ground. Both teams went back-and-forth for the rest of the first half putting up touchdowns.

On West Point’s next series, Jones started it with a 31-yard pass to Steven Rodriguez, which put the Warriors at the 32-yard line to end the first quarter. Hunter Persall finished the drive with a hard-nosed 16-yard touchdown run to put the Warriors back up, 13-7, after the blocked PAT. The duo of Gabriel Anglin and Jackson carried the load on their next series, with Anglin finishing it off with a 7-yard touchdown run to put the Aggies up, 14-13. Persall gave West Point the lead right back as he scored on a 69-yard run down the left side on the first play to make it a 21-14 game after the 2-point conversion. Persall finished the game with 114 yards on 13 carries and two touchdowns.

Hamilton tied the game at 21 on a Jackson 1-yard run, and both teams went into their respective locker rooms with the score still tied at 21.

The second half started out the same as the first for the Warriors; on just the third play of the series, Jones took off down the left side and scored on a 57-yard run to give West Point a 28-21 lead with only 1:40 coming off the clock. The Aggies tied it up once again on their next series as James Brown found Alex Reid on a 62-yard touchdown pass on a third-and-24 play. Jones found the end zone once again on the ground as his 56-yard run broke the tie and gave West Point a 35-28 lead; Hamilton tied it up once again on a 48-yard connection from Brown to William Reid.

The Warriors were forced to punt for just the second time in the game on its next series. A 24-yard run by Brown on the keeper helped set up Jackson’s 17-yard touchdown run later on in the series to start out the final period; that gave the Aggies a 42-35 lead with 11:52 remaining in the game. West Point looked to tie it up once again but turned the ball over on downs. Anglin helped stretch the Hamilton lead on its next series; his 8-yard run widened the Warriors’ deficit to 48-35 after the failed 2-point conversion.

A big 31-yard pass from Jones to Sapp on the first play of its next series put West Point in business quickly as the Warriors looked to stage yet another late comeback. The Jones-Persall duo worked to perfection as Jones later found the end zone on a 1-yard run to cut the Aggie lead to just six at 48-42 with 6:01 remaining in the game. The Warrior defense forced a big Aggie punt on its next series. They were pinned on the 9-yard line. After Jones found Persall on a 11-yard pass, Persall got stopped for no gain, and three incompletions later, the Warriors turned the ball over on downs. Hamilton ran the remaining time off the clock, and the Warriors fell in their region opener; they also suffered their first home loss of the season.

Jones finished the game 6 of 13 for 125 yards and a touchdown; he also finished with 139 more on the ground and three scores. Sapp finished with 83 yards on a pair of receptions and a touchdown. The Warriors fall to 2-1 on the season and will look to get their first region win in their road opener at Lawrence County (Class 5A, Region 7) next week.