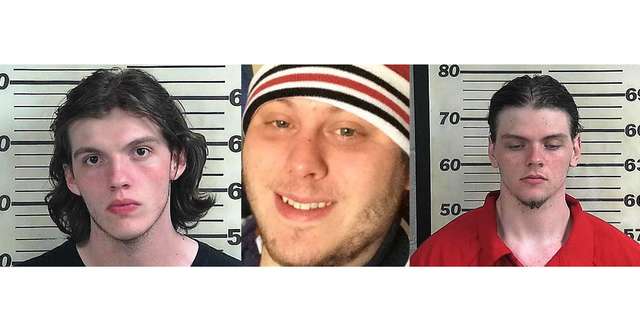 Tyler Hudson, left, and Andrew Maresh, right, were arrested and charged with the murder of Daniel Ray Osborn II, center, after Osborn’s body was found buried behind the Fairview home of Maresh’s grandmother. / Osborn’s photo courtesy of Facebook; Mugshots courtesy of the Cullman County Sheriff’s Office

CULLMAN – Last week, Andrew Jacob Maresh and Tyler Stephen Hudson, who have been charged with the murder of Hartselle resident Daniel Ray Osborn II, applied for Youthful Offender (YO) status with the Cullman County Circuit Court. At the time of their arrests, Maresh was 19 and Hudson was 20.

Osborn’s body was found buried on the property of Susan Winton Smith, Maresh’s grandmother, on March 26, 2018. Hudson, of Baileyton, and Maresh, of Hartselle, were arrested and charged with murder that same night. Authorities recovered the body of Osborn, who had last been seen by his family on Feb. 3, 2018, from Smith’s property on County Road 1534 in the Fairview community. Court documents revealed that Osborn died of a gunshot wound to the back of his head.

Defendants who are younger than 21 at the time of the offense with which they are charged can qualify for YO status, but courts have discretion in their decisions under Alabama Code Section 15-19-1. YO status focuses on rehabilitation of the offender, and keeps the crime off the offender’s public record, even in the case of a conviction.

According to information available on the website of Birmingham law firm Bradford Ladner, the investigation into a YO request will often consider the defendant’s:

If the defendant qualifies as a YO, the penalties of a guilty verdict can be significantly reduced, with prison sentences not to exceed three years.  Alabama Code Section 15-19-6 states that:

(a) If a person is adjudged a youthful offender and the underlying charge is a felony, the court shall:

(1) Suspend the imposition or execution of sentence with or without probation;

(2) Place the defendant on probation for a period not to exceed three years;

(3) Impose a fine as provided by law for the offense with or without probation or commitment;

(4) Commit the defendant to the custody of the Board of Corrections for a term of three years or a lesser term.

(b) Where a sentence of fine is not otherwise authorized by law, then, in lieu of or in addition to any of the dispositions authorized in this section, the court may impose a fine of not more than $1,000.00. In imposing a fine the court may authorize its payment in installments.

(c) In placing a defendant on probation, the court shall direct that he be placed under the supervision of the appropriate probation agency.

(d) If the underlying charge is a misdemeanor, a person adjudged a youthful offender may be given correctional treatment as provided by law for such misdemeanor.

Review of other Alabama murder cases

Statistically, murder defendants don’t tend to have good luck with applications for YO status, though they will occasionally get their wish.

Maresh and Hudson are scheduled for hearings before Circuit Judge Martha Williams on Aug. 14, to determine if they qualify for YO status.

Smith, 66, is facing charges of murder and first-degree hindering prosecution. She has been released on bond.