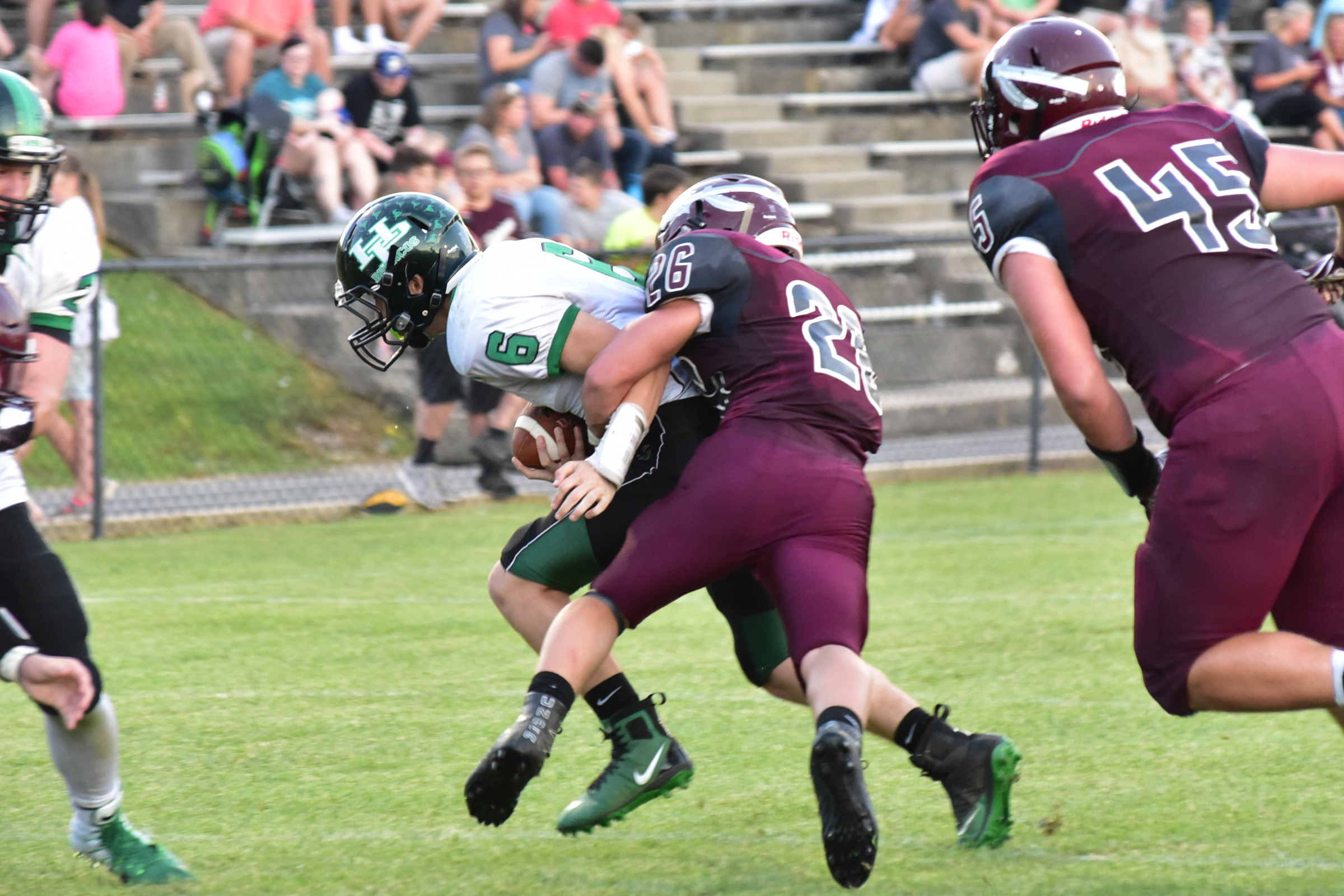 The West Point Warriors and Holly Pond Broncos played to a 21-21 tie in their spring football game Friday. (Bill Piper)

WEST POINT – Holly Pond and West Point faced off in some spring football action Friday, and it was nothing short of exciting and dramatic as the teams played to a 21-21 tie.

The defense on both sides started out strong as neither team could scratch the end zone for most of the first quarter, but the Warriors looked to get the first touchdown of the game when they forced a Bronco fumble and recovered it at the 45-yard line. A scary moment happened for West Point quarterback Rylan Jones during the drive. He tried to get in the end zone and suffered an injury to his kneecap, which kept him out for the rest of the game. Hunter Persall ran it in from 2 yards out to put the Warriors on the scoreboard with 1:43 remaining in the first quarter.

Holly Pond lost its starting quarterback, Kyler Chaney, in the second quarter with 8:04 remaining after his knee got scraped. Brody Rowell replaced Chaney for the rest of the drive and he drove the Broncos down the field; he finished the drive off with a 1-yard quarterback sneak to tie the game at 7 with 2:41 remaining in the first half. But West Point quickly answered on its next drive when quarterback Whit Laney completed passes to Persall for 10 yards and Kolton Sapp for 34 yards to quickly put the Warriors at the 26-yard line. After the Warriors got called for a personal foul on their next play, Persall found the end zone when he ran down the left side and evaded a defender before crossing the end zone for a 17-yard touchdown run to put West Point ahead, 14-7, which was the score at the half.

Both defenses stood out for most of the third quarter, but after stopping West Point on a fourth down play, Holly Pond found itself in dangerous territory at the 14-yard line. Chaney started the second half for the Broncos and he helped get some key yards and a couple of first downs during the drive; Jeremiah Holmes broke free for a 42-yard run and the Broncos wore down the Warrior defense on the ground. After a Chaney 7-yard run put the Broncos at the 2-yard line, Levi Boatright took it in from there to tie the game at 14 with 44 seconds remaining in the third quarter.

Balanced running by West Point helped the Warriors move the ball down the field in the fourth quarter, but Laney forced a pass on a second down and it got intercepted by Chaney at the 3-yard line; he nearly took it the distance, but he got tackled at the 5-yard line; however, Holly Pond got called for a personal foul and the ball got moved back to the 20-yard line. On the first play, though, Rowell found Tyler Boatright for a 20-yard touchdown to give the Broncos a 21-14 lead with 9:29 remaining in the game. After being forced to punt on their next series, the Warriors looked to get the ball back, and they did just that as they forced Holly Pond to punt and got the ball back with less than three minutes remaining.

Some tough yards by Lucas McAfee and Hunter Morrow got the Warriors going offensively. Then came the biggest play of the game as, on a third-and-8 from the 39-yard line, Will Cochran dropped back to pass and found Jacob Dye on the left side; Dye jumped up and grabbed the ball, and he took it to the end zone to tie the game at 21 with 1:44 remaining in the game. Holly Pond looked to break the tie, but the Broncos couldn't get past midfield, and the game ended, 21-21.

West Point finished with 372 yards of total offense; 210 of those yards came on the ground. Persall finished the game with 109 yards and a pair of scores. Laney completed four passes for 86 yards, Cochran completed his only pass for 61 yards, and Jones completed two for 15 yards before getting hurt. The Warriors will start the season on Aug. 23 at home against Fairview.

Holly Pond finished with 270 yards of total offense: 196 yards rushing and 74 through the air. Holmes finished with 112 yards on the ground; Chaney threw for 47 yards and Rowell completed a pair of passes for 27 yards and a score. The Broncos will take on New Hope at home on Aug. 24.