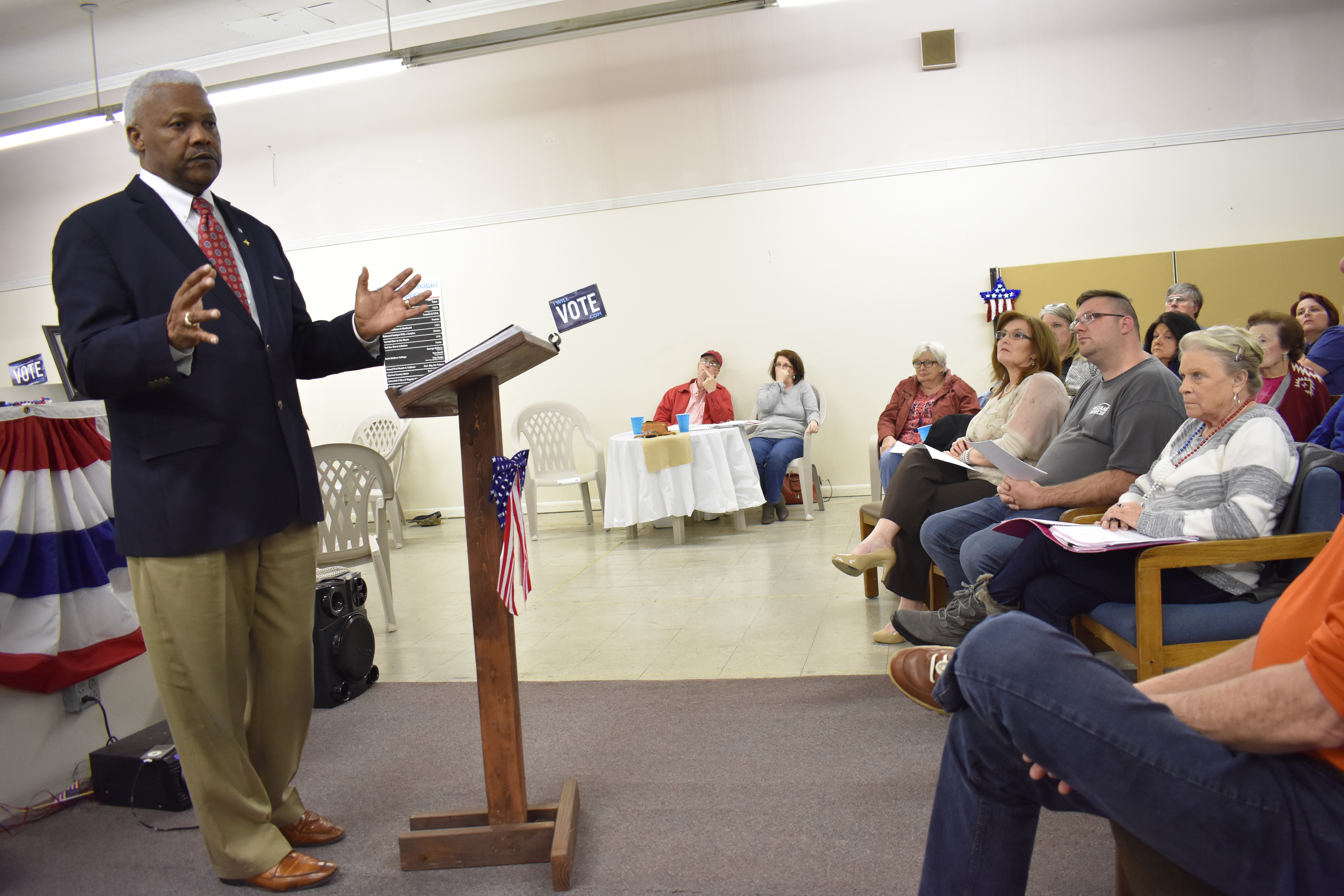 James Fields talks to county Democrats about his campaign and various platform issues on Thursday night in Cullman. / W.C. Mann

CULLMAN – On Thursday evening, Democratic gubernatorial candidate, former state representative and minister James Fields took a night off from the campaign trail to stop in Cullman to speak at the Cullman County Democrats’ monthly meeting.

Before he spoke, Fields, a native of Colony, spoke to The Tribune. “The campaign is going extremely well, a lot further along than I thought we would be, because four years ago I didn’t have a primary opponent. So, we spent our time on the phone (then) raising money; now we spend our time on the road, speaking here and there.”

Just this week, Fields and his team have visited Phenix City, Auburn, Anniston, Birmingham and Huntsville.  Friday they planned to be back in Birmingham, then down to Tuscaloosa. According to the candidate, he has recently seen new support coming from the Huntsville area, and has even picked up a few voters in Winston County.  Fields said he is gaining ground in Jefferson County, and campaign workers in Montgomery and Mobile are having good results in those places. He also shared several other places around the state where he has visited and made contact with local residents.

In his address, question-and-answer and one-on-one with the Tribune, Fields addressed a number of issues.

Fields supports a state lottery, under certain conditions, primarily that lottery revenue must go into education and must supplement, not replace, the current state education budget.  He wants that revenue to fund programs to give Pre-K parents more quality time with their kids, and to fund more Pell Grants for students in college and skilled trade training programs.

Said Fields, “A lottery is not something that’s going to get us out of debt.  We must become more fiduciarily responsible, making sure that the legislators are doing their jobs.

“Both of my opponents talk about Pre-K and education lottery, but before they’re finished they’re already taking money out.  The lottery will never be used to replace the education budget, just to enhance it: vocational training, schools who are falling behind because they don’t have adequate supplies, and helping parents become parents with their children.”

Fields also said that he would require a certain amount of lottery money to go into programs to respond to gambling addiction.

To The Tribune, Fields said, “We just want to make sure everyone understands that our platform is moving Alabama forward, not backwards, not stagnated.  And we’re going to invest heavily into public education, to make sure that every school has the necessary tools that they need to educate our children.

“The good thing about the millennials and the ‘I’ generation: they’re coming along pretty quick, and they’re going to be the ones who carry us on over.  And we’ve got to make sure that we have invested in them.”

Fields told The Tribune, “About the biggest thing that’s pushing now is people want good health care and education.  So, we’re pushing because, if we win the nomination and the race, people don’t even have to worry about the Medicaid expansion.  It will be signed, and we will recapture that $1.8 billion, and we’ll recapture 30,000 jobs, and we’ll be able to open up some medical facilities throughout the state where they have been closed.  We may not get them back to full capacity, but we will at least provide some beds until they can get somewhere else.”

Addressing the crowd, the candidate stated the issues with dollars and numbers, then noted the number of hospital closures over the last few years, remarking, “And what does that mean to the people in the far-reaching corners of Alabama?  What does that actually mean? It means that they can’t get health care, or they have to wait, or they die. We’ve come too far in Alabama to let that happen.”

Said Fields, “We haven’t dealt much with the gun issues, you know, the shooters in schools.  And of course, our hearts are with those families, as late as yesterday (Wednesday) at Huffman (High School in Birmingham). But we’ve got to train our law enforcement officers better; especially our school resource officers.  They’ve got to be trained, and they’ve got to have an eye and an ear for what’s going on, because some of this stuff can be stopped. It’s nice to say that you’ve got an officer there working–a resource officer–but if things continue to happen the way they are, you either need to get more, and make sure the funding is there, or make sure that they’re properly trained.  I’m not saying that they’re not properly trained, but somebody’s missing something.”

Fields took a moment to speak specifically about this week’s school shooting at Huffman High School in Birmingham:

“Listening to one of the city (councilwomen) of Birmingham, she said she had talked with the young lady who was killed yesterday (Wednesday), several weeks back.  And (the student) had shared with her that they were having problems at the school, and could she come and talk to them. Well, I don’t blame the city councilwoman–she didn’t get over there; but she should have shared that with somebody.  A school administrator says, ‘Look, y’all got a problem over there, and it’s boiling, and y’all need to tend to it, and you need to talk to this young lady,’ and it may have saved her life.”

“We want to create higher paying jobs,” Fields told the audience.  “And what do we mean by that? We want to make sure that every family has a living, equitable salary.  You know, if you say you’re going to raise the minimum wage to $10.10, then that may not be a livable wage for somebody in a different area of Alabama.  We just want employers to pay their fair share, and what we will do is, we will make sure that employers invest back into their community.”

Fields is proposing a high-speed rail system that would connect various parts of the state, including Cullman on a line connecting Birmingham and Huntsville, and even points in other states like Nashville.  Such a system, he stated, would allow people to work in other locations without having to move out of the Cullman area.

He also addressed other infrastructure issues, including the need for broadband access for schools and businesses.

During the Q&A that followed his address, Fields even weighed in on Cullman’s notorious concrete lane dividers on US Highway 278, arguing that the existence of the dividers is owed to bad blood between Republican state Sen. Paul Bussman and the Alabama Department of Transportation (ALDOT).

The candidate then related how he and others were able to talk ALDOT into removing barriers that were impeding the movement of trucks around a business in Hanceville, saying, “It’s just how you talk to people, and Bussman ticked him off, made him very angry.”

The Tribune reached out to Bussman for a response:

“This is politics as usual and absolutely false.  I met with the governor and a representative from ALDOT in Montgomery on this issue because so many people were upset about the project.  After my explanation, Gov. Ivey told the representative from ALDOT to stop the project until ALDOT met with the City of Cullman. That meeting occurred the following week and the City agreed to allow ALDOT to proceed to completion and evaluate three months after completion,” said Bussman Friday morning. “Mr. Fields was not involved in any of those meetings and has never been in a meeting where Mr. (John R.) Cooper (ALDOT director) and I were together.  On the contrary, it is also important to note that I have brought in a tremendous amount of road and bridge money because I have built a very good relationship with Mr. Cooper and ALDOT.”

“We believe that we’re on the right track,” Fields told the crowd.  “We just need to stay on the road as much as we can–sometimes it’s 24 hours a day–but we believe that we’re going to win . . . We’ve got a long way to go, but we can do it with your help.  We just need you to spread the word, make sure that people know who we are and what we stand for, and that we’ll stand strong and hard, because it’s going to be you who take care of us in Montgomery.”