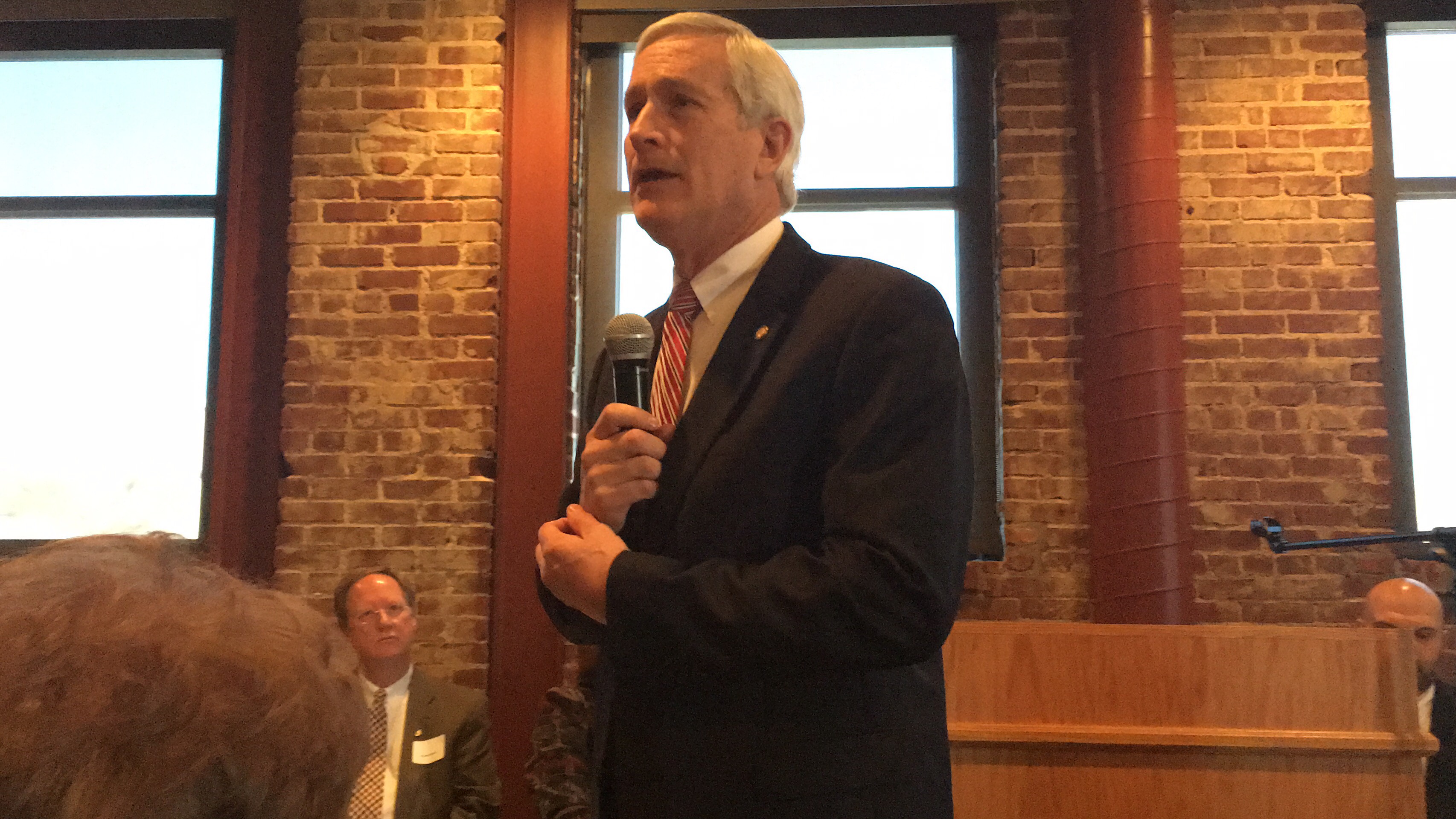 Shedd touched on the politics behind the recently-announced Toyota Mazda plant, the state budget, ASDE’s search for a new superintendent and Medicare, among other topics.

“We’ve had a lot of positive news in the state of Alabama, not just the national championship that we’re always proud to have Alabama or Auburn win, but we also have had some great news not only for north Alabama but the whole state with the recent announcement of the Toyota Mazda project,” Shedd said. “We’re so excited about that and the opportunity it provides for our area and for the people of north Alabama, but there was something that really struck me about that deal… the fact that Governor (Kay) Ivey and Huntsville Mayor (Tommy) Battle put aside politics to work together to accomplish the goal of getting that project here. That’s pretty neat. You just think about that, they’re both running for governor, but they had to work together to accomplish that goal and that’s the way politics really should work, and I think they both ought to be commended for it.”

Education funding was also an important point for Shedd and he made sure to give an update on that budget. Shedd said he is happy with where the state is in the general fund this year as well.

“We’re blessed and fortunate that our budgets are better this year, our education budget and the general fund as well. This delegation will do everything we can to take good care of our local schools, our local public schools and also Wallace State, which is in my district.” Shedd said. “The general fund, we did something last year that was just almost unheard of in state politics. We saved, instead of spending all the money that we had we had a one-time substantial amount of money from the BP Oil settlement that was awarded to the state and we didn’t spend it all. We saved $93 million of it last year to put it a savings account so to speak for this year because we knew we were looking at that time we were looking at an estimated $105 million shortfall for this year. But, the general fund is better this year due to some things and legislation with the online sales and also Medicaid is asking for less money than last year which hasn’t happened in a long time.”

Harbison took time early in his remarks to address his thoughts on domestic violence issues and how he is working to try and alleviate some of those problems.

“Domestic violence is a problem in Cullman County and across the state and I got to see a lot of that while working as a law enforcement officer. So, we have three classes of domestic violence and what my bill will do is domestic violence first and second, which are both felony charges it’s going to increase the minimum sentence if the offense occurs in the presence of a minor child.” Harbison said. “First of all, we need to do all we can to prevent domestic violence but a lot of these kids, if they grow up living in those households and they see Mom and Dad out like that, you know sometimes they follow into that same cycle, so we need to especially make sure that it doesn’t happen in front of children. I think that’s a good agenda bill and I think we’ll get passed up fairly soon.”

Harbison was asked about his position on the proposed fuel tax.

“They introduced a gas tax bill last year, a statewide gas tax bill, and I am absolutely opposed to that bill. One thing is it automatically put the tax on with no vote from citizens and another problem that we have in Cullman… I think we’re second in miles maintained by the county commission on county roads, and with a statewide gas tax, what they do is when you send it to Montgomery, then they send it back out according to your county’s population. So, we’re somewhere mid-range in our population and so we don’t get back near what we produce on a statewide gas tax. If we are going to have a gas tax, I think for all of us we’re better off to keep our money here locally instead of doing that.”

Bussman was the final speaker for this year’s luncheon. Education spending was one of the focuses of Bussman’s speech and he broke down why he disagrees with what the state is doing with education funds.

“One of the situations that we’ve got right now is in higher education where we just did a four percent, everybody gets four percent more, and to me that’s a horrible way of budgeting. I know for a fact that if I’m in the top category of the money-getters, and I would say UAB is the top category of money-getters, I’m going to take four percent if the University of Montevallo is down at the bottom and they’re only going to get four percent, because if you do the math on that, UAB is going to get a whole lot more money than Montevallo is at four percent,” Bussman said. “Same thing goes with our community college system. We have a tremendous lobby for higher education in Alabama. Each of the universities probably has three or four paid lobbyists that come to us every day and want something for higher education. We don’t have that kind of support in K-12. We don’t have that kind of support in community college; they just don’t have the money to hire those kind of people. We spend money in K-12 in the classrooms. Higher education has a better opportunity to hire lobbyists, and that’s going to be a tremendous fight over the next couple of years as money starts coming in, is to make sure that we’re providing enough money for K-12 and community college systems.”

Bussman got right to the point on how he feels about the ASDE.