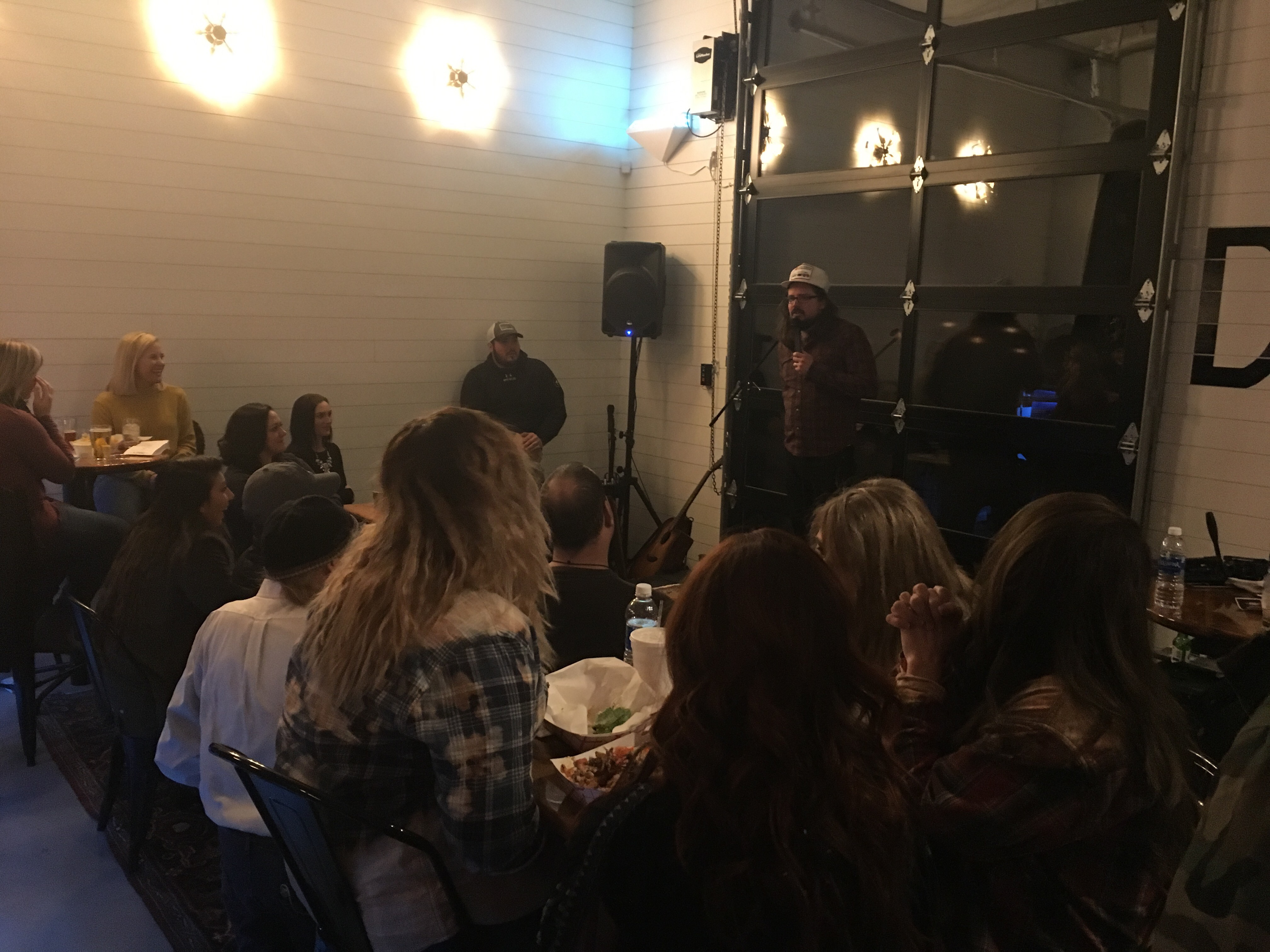 CULLMAN – The first ever Mae’s Comedy Night over at Mae’s Food Hall Thursday brought in one of the biggest crowds that the venue has ever seen. Alex Swindle kicked things off at with a musical performance, but the headliner for the event was comedian Dusty Slay who followed his wife and fellow comedian, Hannah Hogan, on stage. Mae’s owner, Shane Quick, was excited to be able to bring a unique event to Cullman and plans to keep adding new special events at Mae’s.

“This is one of the reasons I wanted to have a bigger venue like we do. That way we can have music and have comedy and have bingo nights and have a little bit of everything,” Quick said. “That’s kind of what I do for a living is put live events on (Premier Productions), so I wanted to have a venue that would kind of host nights that we don’t get to have, like comedy. There’s a lot of great restaurants and venues around town that do karaoke and bring in music and things like that and our goal was to do something a little bit different to give some variety to the people of Cullman.”

Quick was aware that Slay is from Alabama and knew he would be a good fit for Mae’s. The timing worked out well for Slay and Quick and they even had a mutual friend that helped with the booking process. Quick also hopes that Thursday night’s event will keep the community interested in comedy for weeks to come.

“Well it’s kind of funny, he and I share a mutual friend from the record label in Nashville and he told me about Dusty’s comedy, and I started checking him out and knew pretty quick that I would want him to come to Mae’s,” Quick said. “I went and heard him live and I was kind of blown away by him and then he went and did the (Jimmy) Kimmel show like 10 days ago and the timing was good to have him here, so we’re pumped for him to be the guy to kick it off and we’re looking forward to having (a comedy show) at least once a month, having some more comedy come to Mae’s Food Hall.”

The star of the night, Slay, grew up in Opelika, and like so many other Alabama natives, he grew up in a family split between the Crimson Tide and the Auburn Tigers.

“That’s all complicated for me; I’ve got divorced parents and my mom is an Auburn fan and my dad’s an Alabama fan, so I hate to see either of them lose,” Slay said. “I know it’s not a good answer, but my family is so sensitive I have to be that way in order to keep peace. I had an Auburn starter jacket growing up that I don’t think my Dad ever knew that I owned.”

Slay is enjoying a little more exposure than he’s been used to in his professional career thanks to his appearance on “Jimmy Kimmel Live” on Jan. 3. His travel schedule hasn’t allowed him to pay much attention to any extra attention he’s getting, but the recent exposure hasn’t changed his humility and excitement when it comes to performing.

“It’s helped me a bit. I’m already on the road a bunch so a lot of the clubs I already have relationships with, it just helps me out there, but honestly I was already booked up when I got that so it’s hard to tell what effect it had but it definitely helps,” Slay said. “This is a great spot you know, I mean I’ve done all kinds of shows. I did Jimmy Kimmel and then the next night, it hadn’t aired yet, so I wasn’t allowed to tell people. I did a bar in Chapel Hill, North Carolina with about 10 people so that was a big letdown, you just did Jimmy Kimmel and you’re not allowed to tell anyone yet and then I’m in there, and I didn’t bomb, but it was only 10 people in the room,” he joked.