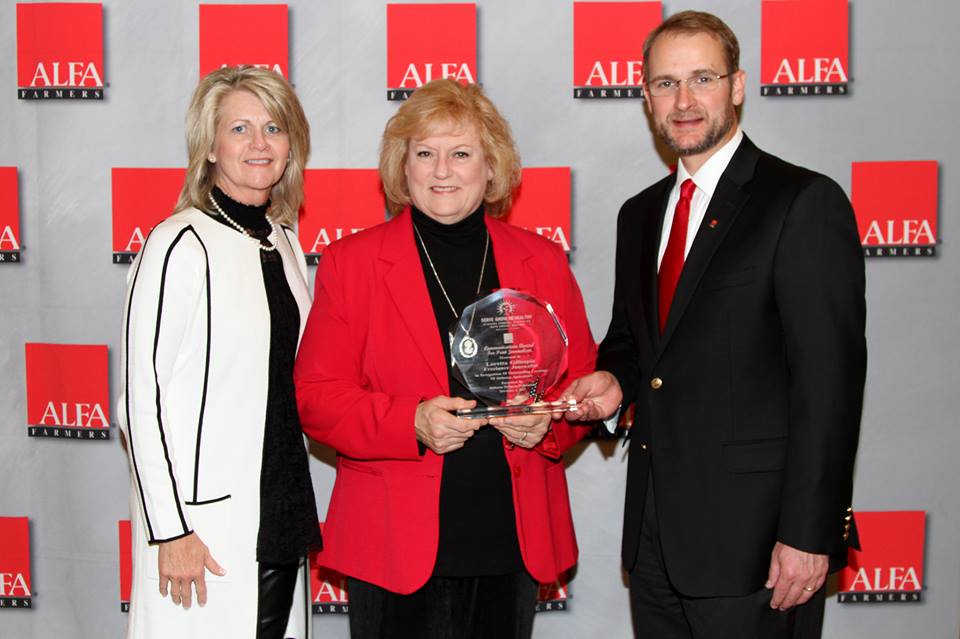 During the event’s second general session the morning of Dec. 4, Federation Director of Communications Jeff Helms thanked Gillespie for her excellent coverage of farming and rural news stories.

“With Loretta’s work reaching thousands of readers, we are even more appreciative that she uses her writing talents to share the stories of rural Alabama,” Helms said. “Her love for rural Alabama even goes beyond her work as a reporter. Her heart for service are on display every year at the Cullman County Farm-City Banquet.”

“She really gets to know the people in her articles and asks questions in a way that is not intrusive or intimidating,” Lake said. “She has a tireless work ethic. She has a way of wording stories that makes you feel like you’re right in the middle of it … and captures the hard work and trials of being any type of farmer.”

“Looking around (at the folks attending this event), I’ve seen a lot of broad shoulders, and that’s good because it rests on your shoulders to feed 9.1 billion people in the year 2050,” she said. “Farmers are the most tenacious people I’ve ever known. Thank you to all of you for this award, and I hope I can live up to the words Lisa said.”

Further, Gillespie said, “I'm humbled to receive this award, but I'm just the teller of their stories; the farmers are the ones who are out there before the sun comes up every day, and even working by the light of the moon when necessary. Farmers are the salt of the earth and their wives are the hardest working women I know.

“I want to thank Lisa Lake for nominating me for this award, and Alfa and the Farmer's Federation for choosing me…but I want the focus to be on these people who do so much now, but will be expected to feed more people, on less land, with fewer hands in the coming years. We all need to give them as much support as we possibly can by buying locally grown meats, dairy and produce.”

The award presentation was part of the Federation's two-day annual meeting, which included elections, an annual report, the Young Farmers Discussion Meet, a keynote from Gov. Kay Ivey and other special recognitions.