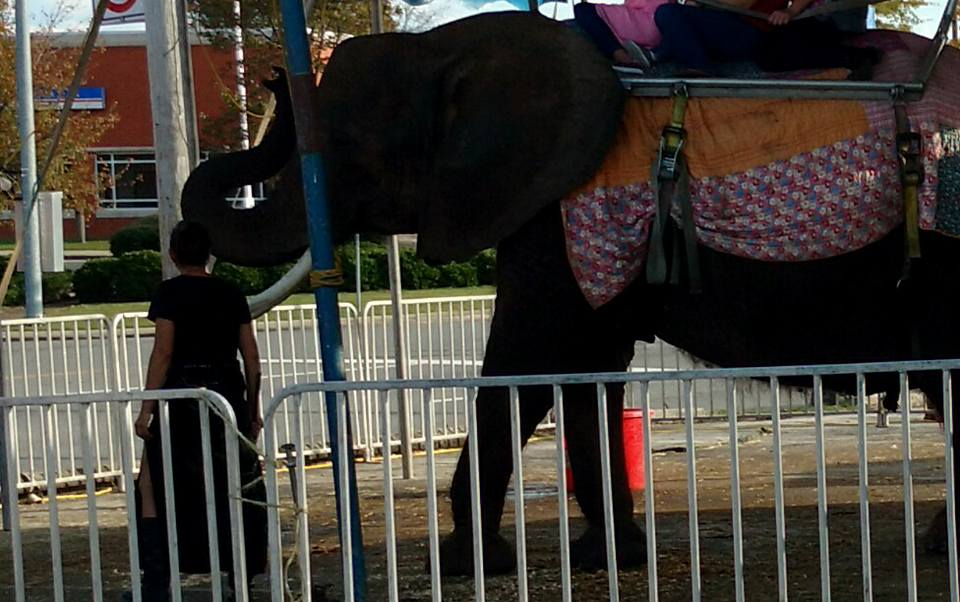 Nosey the Elephant carries kids on rides in a pen on Main Avenue last weekend. / CAAWA

CULLMAN – This past weekend, a strange sight appeared in front of the Rent-A-Center on Main Avenue Southwest, just off U.S. Highway 278: an elephant in a small circular pen made of street barricades, carrying kids on rides.  The scene drew a lot of curiosity from residents, and the elephant’s owner, Liebling Bros. Family Circus, caught the attention and ire of the Cullman Area Animal Welfare Association (CAAWA).  When The Tribune looked into the matter after seeing CAAWA’s post on Facebook.  This is what was found.

The Liebling Bros. Family Circus, based in Florida, has operated under several names, including Liebling Family Circus, Great American Circus and Florida State Family Circus.  Likewise, its owner, Hugo Tomi/Tommy Liebel, has operated as Tom Liebling, Tommy Liebel, Hugh Blum and Hugo Bloom.  He claims descent from a long family line of circus folk dating back to the 16th century.  His website claims that the circus puts on 400 shows per year during a 40-week travel season to 100 cities.

The Liebling Circus has a long history of run-ins with the law going back to 1993, over its alleged mistreatment of animals, including monkeys, donkeys, cows, rabbits and a now 31-year old African elephant named Nosey.

In all, Liebel has received more than 200 citations for various violations.  A detailed list compiled into a fact sheet by People for the Ethical Treatment of Animals (PETA) is available at www.mediapeta.com/peta/PDF/Liebel_Family_Circus_Factsheet.pdf.

Nosey was born in Zimbabwe in 1986, and was captured and sold to the circus at 2 years of age in 1988.  She is officially called Nosey, but has been marketed in certain venues as Tiny, and possibly as Peanut or Dumbo.

Liebel has been cited by the USDA for numerous issues involving Nosey, including:

After Nosey attacked a Liebling Circus worker, that worker presented an affidavit to the USDA, stating that workers routinely used electric prods on the elephant, and on at least one occasion, multiple workers beat her with sledgehammers and shovel handles.

In 2013, the circus was sued by the USDA for 33 violations of the Animal Welfare Act, including multiple issues involving Nosey.  Liebel was, in the end, hit with a $7,500 fine.  The amount was protested by animal rights groups, claiming that the violations could (and should) have led to more than $300,000 in fines.

In June of 2017, just a few months ago, the Florida Fish and Wildlife Conservation Commission refused to renew Liebel’s permit to possess Nosey in Florida.  The family is fighting the ruling, but may be having to keep Nosey on the road outside the state, though the exact legal status of the case could not be determined.

Liebling Bros. Family Circus has seen numerous performances canceled over the years, because it violated local ordinances in venue cities, or when promoters and sponsors learned about the business’ legal issues.

The circus came to Cullman last week with a contract to perform at the Cullman Civic Center, but that contract was canceled.  Cullman Parks and Recreation Director Nathan Anderson released the following statement:

"After meeting with the staff from the Great American Circus, we all came to the realization that there would be some safety issues as well as some things that the civic center simply could not do. Due to these complications, Great American Circus canceled their shows for this weekend in Cullman and we refunded their money."

The following statement came from the office of Cullman Mayor Woody Jacobs:

“A circus was scheduled to be held at the Cullman Civic Center on Nov. 3-4, 2017.  A business license was issued to the Great American Circus for this event.  However, this event promoter notified the City of the cancelation of the circus on Friday afternoon, and advised the City at that time that arrangements had been made to display the elephant on private property.  In response to multiple calls regarding possible abuse or neglect of the elephant, (the) Cullman Police Department sent an animal control officer out to investigate.  The animal control officer reported that the elephant had adequate food and water, appeared to be well-nourished, and did not show any visible signs or abuse or neglect.  It is my understanding that the elephant show ended Sunday evening.”

When The Tribune checked Monday afternoon, there was no trace of Nosey or Liebel at their weekend location.  Further, The Tribune was unable to locate Liebel or the circus, as neither their website nor Facebook page list upcoming venues.

The Liebel family has set up a GoFundMe campaign entitled “Help Protect Nosey the Elephant,” seeking $10,000 to “help fund the legal fees of the Liebel family, who are being unjustly harassed, terrorized and bullied by animal rights extremists.”

On the campaign page, the family defends itself with the following statement:

“We are the Liebel Family, and we have had the privilege of caring for, working beside, and loving an orphaned African elephant named Nosey, for over 30 years. Our family tours the United States raising awarness (sic) for endangered elephants by providing entertaining and educational shows to children of all ages.

Several years ago, a well known animal rights extremist group decided that since we were a small, family owned and operated circus, with only one elephant, that we would be an easy target for them. Since then we have have been subjected to constant threats, harrasment (sic.), property damage and vandalism. They also began an unceasing propaganda campaign against us, hurling all sorts of ridiculous slander and unbelievable exaggerations about the health, care and well being of our beloved baby girl (Nosey). Most was garbage made up by fanatics, but some went as far as fabrications made up by activist paid "Animal Experts" whom were later found to have never actually seen Nosey, and have no credentials or experience with elephants whatsoever. But refusing to let these extremists affect our lives, at our own expense, we had these claims debunked by the united states government, actual certified experts, as well as America's leading Zoo and Circus Elephant veterinarian.

Recently large groups of Animal Rights extremists terrorized and harrased (sic) the Florida Fish and Wildlife for months on end, often with tens to literally hundreds of thousands of phone calls and emails per day. They even hired lawyers and personal investigators to aid in their bombardments. Due to this level of harassment, we assume that the FF&W, tired of the constant harassment, decided that they wanted NOT to renew our license, so we would no longer be "their problem" so we had over half a dozen inspections in a month span alone, (funded by tax-payer dollars). Each time we passed with flying colors, and not one violation.

Regardless, we recently received a letter that our permit had been denied by means of a small, ridiculous technicality, and not by anything to do physically with Nosey, or the care we provide. It is ridiculous, and we firmly believe that with legal aide, the truth can be brought to light. Please help us fund our planned legal action, all proceeds will go to retaining a lawyer. We will not stop, we will not be silent, and we will not fade quietly into the night, when the safety and well being of our Nosey is concerned. Help us please.”