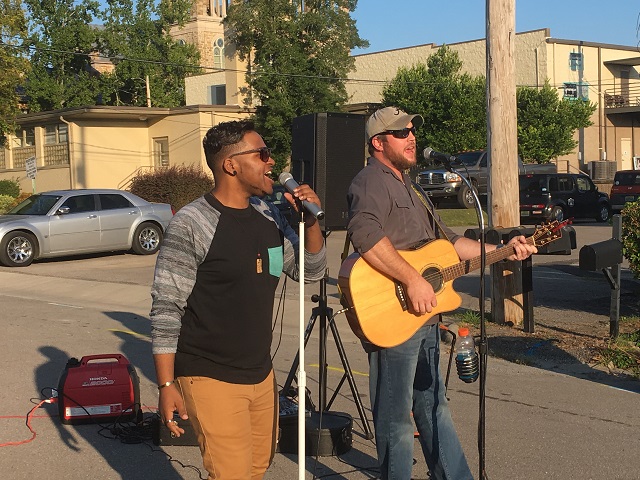 CULLMAN – On the final installment of 2nd Fridays 2017, the First Avenue Special Events District faced stiff competition from high school football games all over the county; at least the organizers thought it would.  By 6:30 p.m., streets were filled, and a steady stream of visitors wandered in and out of shops.  Vintage and custom show cars lined the avenue and began filling spaces on side streets; late-coming classics prowled around, looking for a place to park.  Football may have been in the air, but it didn’t seem to make much of a dent in the downtown crowd.

This year’s 2nd Fridays have been record setters, larger than last year’s, with each succeeding event over the summer drawing bigger crowds than the last.  It was not known whether this last street fair would continue the cycle, especially with such competition, but it will certainly contribute to this year’s lead over last year’s numbers.

Rob Ketcham, communications manager for the Cullman Area Chamber of Commerce, said, “We don’t have exact numbers, but I do know, since June, July was bigger than June, for sure.  And then August was bigger than July.  It’s just gotten bigger every single month, and we’re hoping that will continue tonight.  Attendance has been really, really good this year and, according to everybody, it has been bigger than years before.”

Speaking about businesses in the district, Ketcham shared, “We’ve had a lot of them stay open; sometimes it’s a couple of hours, sometimes it’s the whole event.  I think we’ve seen a lot of foot traffic in there.

“Rumors, a place like that usually closes at 3 most days, and they stay open 5 to 8.  That’s been kind of cool, to have stores like that, that don’t usually stay open.  And then, next year, we’ll have Mae’s down here.  It’ll be a great addition.

“One thing with the (extended) Special Events District, too, you know that helps, because you have a second beer tent, and you have just more areas to draw people.  It’s the whole street.  We know that it works; we’re just trying to do anything we can to make it even better.

“Cullman people get to see it all the time.  One of the things that we love is outsiders: some people from Decatur, some from Huntsville, from Birmingham. They get to come see what Cullman’s all about.  And the Chamber, and Parks and Recreation: we have these groups that want to show off Cullman.  And we have this place and this area that is worth showing off; that’s just special.  Not every city has a place like that.”