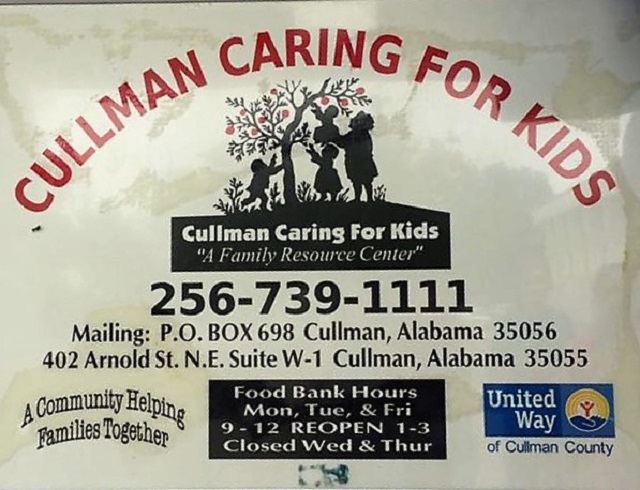 CULLMAN – Earlier this month, a mix-up with the delivery of a large supply of donated food left the pantry at Cullman Caring for Kids (CCK) food bank dangerously low, and its staff scrambling for help.

On Monday, The Tribune caught up with CCK Director Javon Daniel for an update on the crisis.  He had much to say about the community’s response.

“It’s been incredible,” Daniel began.  “The Thursday and Friday when all of this started, we had over 5,200 pounds come in those two days, just from donations from individuals and small businesses.  We’ve continued to have people bringing small donations; we’ve had churches, businesses…it’s been just really, really incredible.  It’s been very heartwarming to us to see the outpouring from the community.

Daniel recognized that many others contributed to the cause, and was apologetic that he could not name every person and business that responded to his organization’s need.

He continued, “A lot of Sunday School classes and churches came in and donated; Bible schools did donations, and we had a lot of churches where the young people actually came here and helped sort the food, and put it where it needed to be.  Temple (Baptist Church) brought their group, and Mount Olive Church on Simcoe-Berlin Road came in with a group of youth.  And they worked really hard, because they were taking what was coming in and they were sorting it by group or the way we store it, and putting it in cases so we can store it more efficiently.  That was a pretty big job.  It’s just been heartwarming!  It’s been absolutely fantastic!”

So how does the pantry look now? Daniel explained, “We are to a level that we can carry through the summer without a whole lot of problems.  Before, we were not, at all.  We were as low for this time of year as we’ve been in a long time.  But, because of the community’s donations and others that have donated, we’ve been able to buy some locally and some at the food bank in Huntsville.  The donations, the volunteers coming in and helping here, have been a big help.”

For more information or to support CCK’s ongoing efforts to feed the hungry of Cullman County, visit www.cullmancaringforkids.com. Monetary or food donations can be made at the CCK office at 402 Arnold St. NE, Suite W-1.