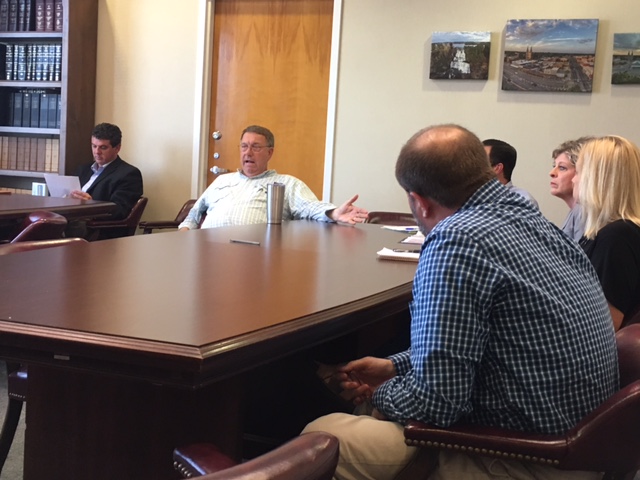 Cullman City School Board Superintendent Dr. Susan Patterson and members of the board listen as Mayor Woody Jacobs speaks.

CULLMAN – The Cullman City Council and Cullman City School Board held a joint, informal round table discussion Monday about several shared concerns, including traffic congestion and annexation. It was not a policy-making session for either body, rather an opportunity for the two to learn what the other is doing and get on the same page.

Traffic flow around Cullman High, Middle and Primary Schools is a major concern for both groups.  To that end, Cullman Police Chief Kenny Culpepper presented maps of a proposed plan to close off certain points on various streets while routing traffic in specific ways, to create smoother flows and safer pedestrian crosswalks at times of peak traffic flow around the schools.

Also discussed as a possible solution to the traffic problem was staggering school start times beyond the stagger already in place.  The council noted that the City has purchased property with plans to eventually build an access road connecting Oak Drive and Highway 278, a move it hopes will ease flow around the schools.  A question from Councilman Andy Page about using school buses received a resounding “No” from the school board, based on cost.

Council President Garlan Gudger expressed concern about the potential impact on the school system of increases in population coming from annexation of outlying properties on the fringes of the incorporated city.  Superintendent Dr. Susan Patterson was not concerned, saying that overcrowding is only an issue in the elementary schools, and that a decrease in area birth rates in the last few years means that the number of students at the young end of the spectrum is on the decline.  The increase in number of area children based on annexation is not outpacing the declining birth rate, Patterson said, so the number of students should not be an issue.

The board pointed out that Cullman High School’s new facility has plenty of room to grow, with a designed capacity of 1,200 students and a current student population of only 900 students.

Some council members were concerned that the $750 per student/$1,300 per family out-of-district fee is too low, so a proposal was set forth to raise the amount, charging each family an amount based on the tax value of their property.

Patterson passed out a budget report showing that personnel and benefits are the largest expenditure of the system, accounting for more than 85 percent of the budget.  Maintenance and technology are the next two big-budget items.

The council indicated that it routinely receives complaints from system personnel that the City underfunds the system.  Patterson pointed out that local funding accounts for 39 percent of the school system’s budget, and that amount places Cullman 20th among the 137 systems in the state for percentage of local funding.  Instead of underfunding, Cullman’s local funding of schools is among the best in the state.

Gudger opened the discussion by stating that his business is constantly getting hit up for money by various booster clubs, and that he regularly hears complaints from other business owners about the same problem.  Board members responded by explaining that an evaluation is underway within the system geared toward bringing all booster clubs under a single umbrella.  They noted that the state has regulations for booster clubs, and that some of Cullman’s are not following the law.  They hope that by bringing all the clubs together, they might regulate them better and give donors the opportunity to write a single check to be distributed to benefit multiple groups within the system without being constantly bombarded with requests.

After noting that many (though not all) of the previously-discussed complaints about underfunding were coming from athletic department personnel, the board clearly stated its position that classroom education is its top priority, and that teachers take precedence over coaches.  Addressing a complaint that the Cullman High School football budget has not been increased in several years, board members pointed out that the use of artificial turf in the stadium has significantly lowered maintenance costs and saved money for the athletic budget, making increases less necessary.

The board concluded by requesting that the council direct personnel or booster complaints about school funding back to them.

Gudger and City Clerk Wesley Moore both took time at the conclusion of the meeting to thank the board for its commitment to helping students who have dyslexia.  Patterson said that response programs for the condition were not state-funded until last year, but now the means are in place to screen all students in the system.  They hope to catch the condition early by screening younger elementary students, and East Elementary now has two teachers who have received training in helping dyslexic students.