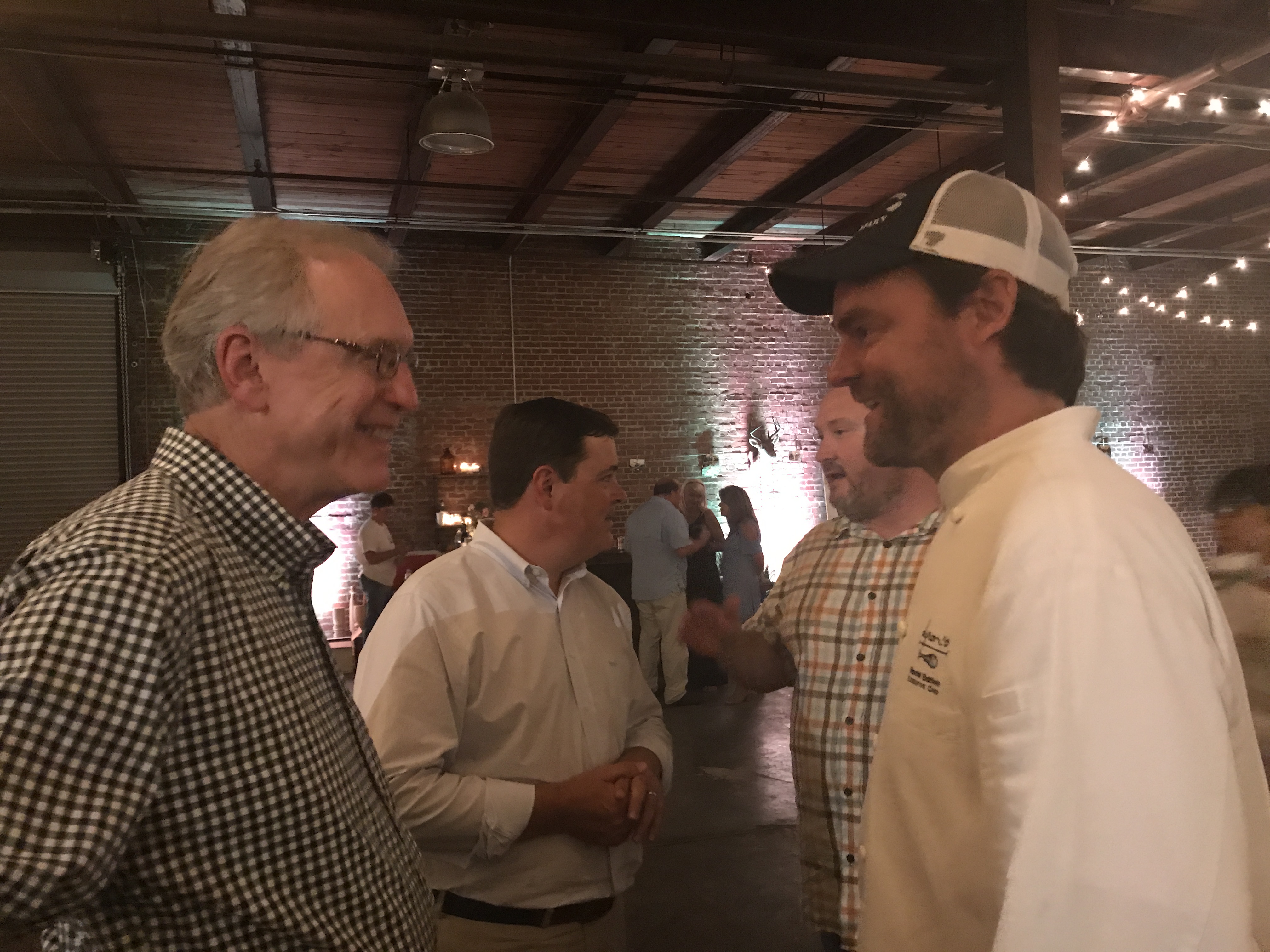 CULLMAN – Once again Cullman has shown its true colors, and they don’t run in the rain. This year’s Dinner on First event was moved into a long unused warehouse on Fifth Street Southwest. The decision was tough, but it was the right one, made obvious by the valets, umbrellas in hand, joking and dancing around in the drizzle to the sound of soft rock music coming through the opened doors of the old building.

According to Cullman City Park and Recreation’s Christy Turner, who took her turn as a server, the decision was made on Tuesday to move the Cullman Parks and Recreation Foundation event, which received rave reviews last year when 240 people were served a four-course meal in the middle of First Avenue in the Warehouse District.

Looking around at smiling faces and twinkling lights, with the sound of laughter and soft rock music mingling and the mouthwatering smells wafting up from below, the room seemed like a movie set, with beautiful people and friendly conversation scripted into the scene, but this was no movie set, simply Cullman at its best.

“It’s amazing what can be done when you don’t care who gets the credit,” Big Doc Williamson pointed out. “It makes my heart swell and brings a tear to my eye, when I look around here and see all of these people who came out and paid $125 a plate to help build a new playground.”

“It’s remarkable,” said Cullman Economic Development Agency Assistant Director Dale Greer. “Anyone who saw this place before Thursday would never believe the transformation,” he said, swinging his arm wide to take in the area, now a study in fashion, ambiance and trendy décor, all done as if by magic, in just two days, by interior designer Amy Wood and a crew of women who positioned furniture into seating areas lit by candles, the twinkle from hundreds of strings of lights overhead.

The transformation he mentioned literally made the huge, empty space into a New York-style expansive loft, with exposed brick walls and crumbling plaster, wooden and pallet made shabby-chic tables, bars and seating areas, lit by softly glowing candles and distressed furniture and accessories.

“It’s remarkable,” Greer said in admiration. “The Park and Rec team even made the tables,” he pointed to the sturdy wooden tables that ran the length of the area in several rows.

“This makes me happy,” said Turner. “This is a city function, yet everyone has joined in to help us, the Rotary and the Pilot Club helped to serve, and several other organizations and so many individuals that I can’t even name all of them.

“We have great people in Cullman who believe in our community and are interested in helping to see that it gets done. Together, we do some great things!” Turner smiled as she gazed around the expansive room.

The meal was served in courses: shrimp salad, soup, entrée and dessert. It was, to put it mildly, worth every penny of the admission. Chef Randall Baldwin of Dyron’s Lowcountry in Birmingham pulled out all of the stops on this menu, braising mounds of short ribs for 14 hours, cooking green beans to perfection and making potatoes into artwork, then topping it off with a dessert so decadent that it’s probably against the law in some places to serve food so rich and flavorful. Dyron Powell, who is a Cullman native, plans to open a branch of his successful restaurant in Cullman in the near future.

By the looks of the crowd Friday night, approximately 330, according to Turner, Powell will have no shortage of clientele.

Musical entertainment was provided by local band, Round 2. After dinner people took to the dance floor, showing that a little rain never stopped anybody from having a great time in Cullman!

Even the busy wait staff was seen dancing around the prep tables and singing along with the tunes as they topped off the desserts in an almost choreographed rhythm.

“Everyone is having a wonderful time,” Turner smiled, indicating the large group assembled under the warehouse roof. “Dyron has been so fantastic, and people are so relaxed and comfortable here, we have a wonderful, giving, community. Cullman is such a special place. These are mostly friends and neighbors, and if you came here not knowing people, you certainly will know them when you leave,” said Turner.

Proceeds from Dinner on First will go toward the planned all-inclusive Connected Park, a public play space that will be shared by all children, including those with special needs.  See an informational video about the project at http://qrne.ws/connectedpark. The plan is to break ground as early as August or September of this year.