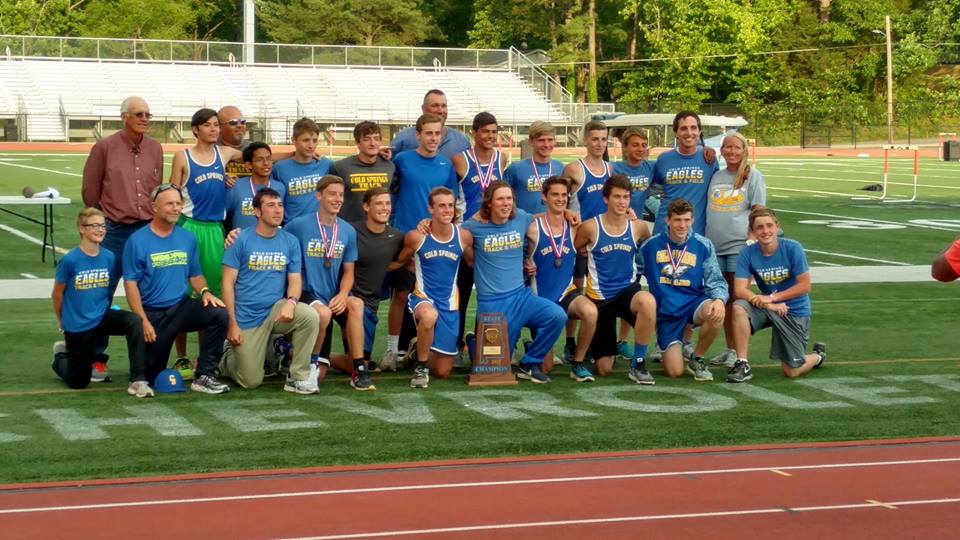 Down to the final event, the pole vault, the Eagles were in third place with 86 points, trailing LaFayette, who had 94 points and St. Bernard who had 88.

It was a team effort for Cold Springs, with Blake Wood, Trevor Slayton and Eli Hamby combined for 11 points, passing St. Bernard's Dominic Pautler, who scored eight points. Pautler lost in a jump off for the title with Devin Johnson of Falkville, putting him in second.

Wood was third and earned 5.5 points, Slayton came in fifth, scoring 3.5 with Hamby taking seventh and scoring two points for his team.

That moved the Eagles ahead of the Saints with 97 points to 96 and dropped LaFayette to third with 94. LaFayette did not score in the final event of the day.

This was the most dramatic ending in the three years the small schools have competed for top honors in Class 1A, 2A and 3A at Oliver Woodard Stadium on the Cullman High campus. This is the final year of the current contract between the AHSAA and the City of Cullman. Bids for future championships will be going on in the immediate future.

For Cold Springs and St. Bernard, this weekend was the continuation of a well-respected rivalry in two sports. In the fall, the Saints edged the Eagles in the cross country state meet, but the roles changed on this beautiful Saturday after all participants had to endure adverse conditions on Friday in the qualifying heats.

Champions were crowned from a series of individual events. These are the winners in their respective events and classifications:

Holly Pond earned fourth place in Class 3A with 44 points. Addison girls were fifth in the 1A meet with 41 points.

From the 4A-7A meet at Gulf Shores (champions crowned):

Great to be a Cullman Bearcat:

Spring sports on the Cullman High campus are prospering.

The success of track and field in Gulf Shores was shared on Saturday with baseball taking a pair from Decatur in the quarterfinal round, 4-1, 2-1 and with the soccer team pulling off a 2-0 upset at Area 14 champion Albertville Saturday night.

Soccer and softball take to Huntsville for their next segment in the postseason.

The softball team will play Thursday at 1:30 p.m. at the Sportsplex in Huntsville against Southside-Gadsden. The Lady 'Cats are champions from Area 14, while the Lady Panthers are runners-up in Area 13.

Cullman soccer meets Carver-Birmingham in a semifinal match Friday at 11 a.m. at John Hunt Park in the Rocket City. The Bearcats are the defending 6A state champions.

Cullman baseball must wait for the conclusion of the Hueytown-Hartselle series to determine where they will play their semifinal round next weekend. Game three of Hueytown-Hartselle is Monday at 4:30 p.m. at Sparkman Park. Plenty of Cullman faithful are expected be in attendance to see if the Bearcats get their old rival in the semis or deal with a ball club from Jefferson County.

Cold Springs softball is in the North Regional in Huntsville. The Lady Eagles face Phil Campbell in the opening round Friday at 3 p.m. at the Sportsplex. Cold Springs comes into the regional as Area 13 champion with Phil Campbell the runner-up from Area 14.

West Point is heading to the North-Central Softball Regional in Tuscaloosa. The Lady Warriors were second in Class 5A, Area 12 and have a 3 p.m. assignment on Thursday vs. Area 11 champion Mortimer Jordan. The tournament is at Bowers Park.

The softball regionals will run through the weekend as will the state soccer championships and baseball, if needed, for game three, or pending weather conditions.