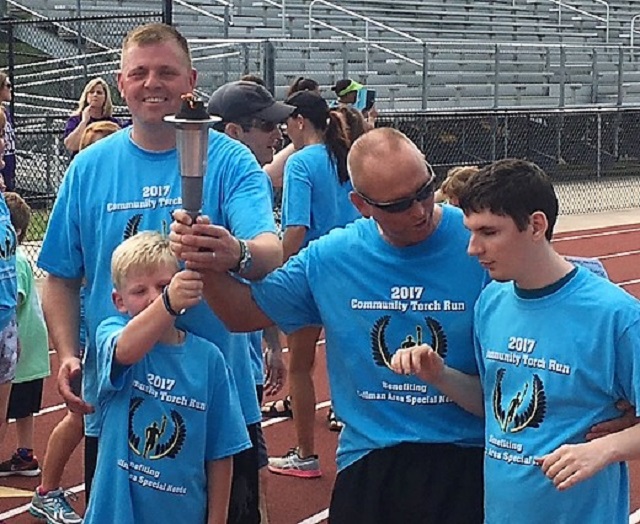 The day began at the Cullman County Courthouse, where Cullman Mayor Woody Jacobs and officers with the Cullman County Sheriff’s Office (CCSO) and Cullman City Police Department (CPD), lit a torch for the games in a ceremony that featured athlete Alivia Bencze leading the Pledge of Allegiance.  Runners, led by none other than Cullman County Sheriff Matt Gentry, carried the torch to the stadium, where athletes Justin Fenner, Karsyn McWaters and Hunter Haynes took it around the track.  That began a day of spirited but friendly athletic competition.

The games and run were both dedicated to the memory of Holly Pond Key Club Sponsor and longtime supporter of the special needs community, Coach Bob Palys.

Before the torch run, Lt. Rex Sorrow remarked, “This community torch run and the games today will be dedicated to the memory of Coach Bob Palys.  He’s always been a huge supporter of the Special Needs Field Day, providing volunteers from his Key Club at Holly Pond.  I think, as a matter of fact, he owned or was part owner of the Awards Palace, and so he would donate awards, ribbons and all kinds of things like that to the Special Needs Day.  Even today, his family is very good about helping out with special needs and the Special Needs Field Day; so we want to make sure that everybody remembers today as being in memory of Mr. Palys.”

Jacobs added, “He helped raise me.  He was a special part of my life.  He benefited the Special Olympics, and my daughter played at the Miracle Field also, so it just touches my heart today for what y’all are doing in this run.”

At the stadium, Melba Palys, Bob Palys’ widow, shared, “He was the most giving person I ever knew.  He loved Special Olympics.  We had a son who had spina bifida; he really got started with him.  His Key Club got involved, because they always need help.  It’s been the history of his life: that he worked with Key Club and giving back to the community every chance he got.  You just don’t know how much this means; it just thrills my heart.  He would be so honored.”

Approximately 150 athletes took part in the day’s activities, including tennis ball and softball throws, shot put, dashes, assisted walks, wheelchair races and broad jumps.  They were cheered on and assisted by around 250 volunteers including 25 off-duty CCSO deputies, CPD officers and school resource officers.

“We’ve got so many people helping us, it’s just unreal,” said Sorrow.  “People volunteer to help us.  Wal-Mart Transportation has purchased medals for all the students that are participating today, so every student will get a participatory medal.  Then they’ll also get ribbons if they’re first or second in their heat.  The sheriff has brought red noses for all the students at the games, and has graciously decided to cook for everybody; so we’ll be having hamburgers, hot dogs, and chips and drinks. The chips were donated by Wal-Mart on 157, and the drinks were donated by Wal-Mart Transportation.

“The sheriff is real big on community events, and he loves getting out and helping out with anything like that,” Sorrow continued. “In fact, he’s the first sheriff who’s ever run in the Torch Run.”

After the run, Gentry fired up the grill and personally cooked hundreds of hamburgers and hot dogs that he provided free of charge to athletes and their families, along with volunteers.

“I always tell everybody our greatest gift is our children,” said Gentry, “and that’s what this is really about: our children and our schools, and doing something special for all our kids.”

The CCSO, along with the CPD, has served the special needs community for years, working with the Special Olympics.  According to a source at the department, a discrepancy over expenditure of donated funds led to a separation.  While not currently associated with Special Olympics, the CCSO has not altered its commitment to persons with special needs, but has focused the use of raised funds on the special needs community of Cullman County.

Look for a full photo gallery on our Facebook page at www.facebook.com/CullmanTribune.