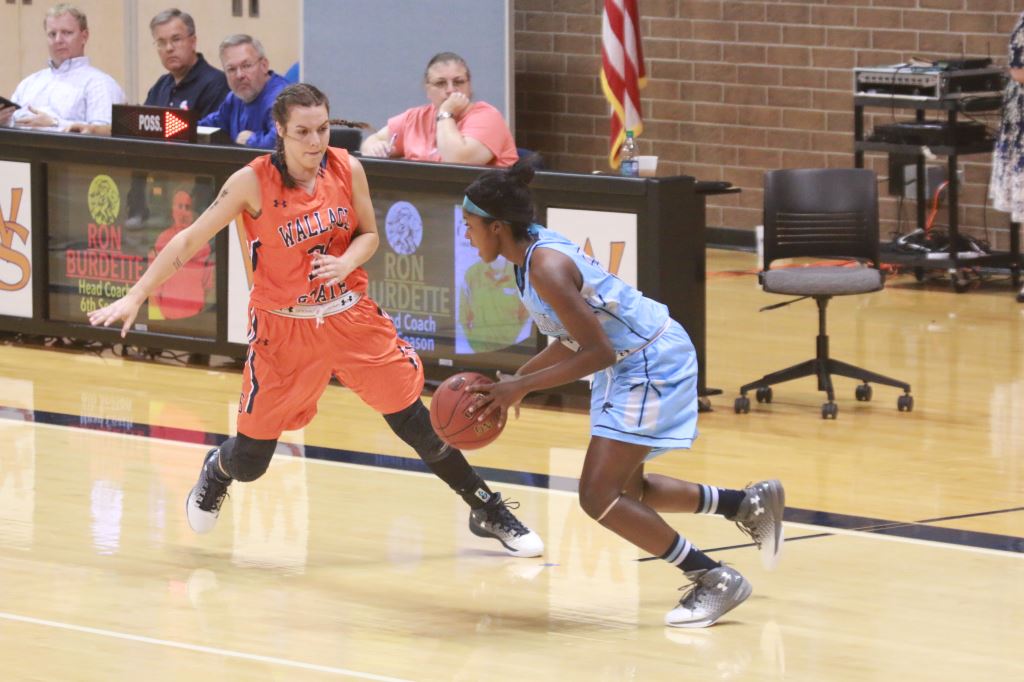 Two years later, and after turning a walk-on invitation into an athletic scholarship, Hollingsworth is one of the key complementary pieces off the Wallace State women’s basketball bench.

And, to top it all off, Hollingsworth is playing for the Lady Lions less than two miles from her high school.

“I’m very thankful to literally be playing right here at home. I always enjoyed playing basketball in high school, but playing in college wasn’t on my mind until my high school coach (Christina Watson) and others said I had the potential to do so,” Hollingsworth said. “I couldn’t be at a better place. My family is here and gets to see me all the time and support me.”

Hollingsworth was an All-State selection for Hanceville High during her senior season, becoming the first player to earn the recognition for the Lady Bulldogs since 2003.

As a Hanceville senior, Hollingsworth was also the recipient of a pair of academic scholarships, including the Charlotte Cummings Memorial Scholarship, which is bestowed each year to a deserving female student-athlete within Cullman County.

Hollingsworth accepted the walk-on invitation from Wallace State coach Ron Burdette upon graduating high school, and it evolved into an athletic scholarship before the 2016-17 season began.

“Being able to walk on was a huge opportunity that I was beyond grateful for, and I was very surprised when coach Burdette gave me the athletic scholarship for working hard before the season,” Hollingsworth said. “No matter if I was a walk-on player or on scholarship, I was going to be grateful to be able to play for Wallace State.”

Burdette presented an athletic scholarship to Hollingsworth after an impressive body of work upon joining the Lady Lions.

“Taylor came in and was very energetic and worked as hard as anyone. She has a motor that won’t quit and showed how appreciative she was of the opportunity,” Burdette said. “It’s hard to find players these days who give it their all like Taylor does. She twisted an ankle in preseason practice, going for a ball that was well out of bounds.

“At Hanceville, Taylor had to do a little bit of everything. She doesn’t have to do that here. She’s figured out her role and does a lot of good things for us. She loves to learn more about the game and has had a successful year.”

Hollingsworth has provided a spark off the Wallace State bench all season. She’s the one most often diving for the loose balls or grabbing the gritty rebounds. The 5-foot-10 freshman has played in all 29 games, averaging 4.9 points and nearly three rebounds per game. She averaged 5.6 points per game in conference play, which was 4th-best on the team, has dished out 27 assists and added 25 steals.

Hollingsworth scored a career-high 19 points vs. Blue Mountain College’s JV on Jan. 27, in addition to a 16-point output vs. Southern Union on Jan. 22 in conference action.

“My job is to get the ball anyway I can. Coach Burdette has always told me he loves my motor because I always want the ball and will do anything to get it. I’m not concerned about scoring a lot of points. I enjoy getting my teammates open for shots of their own,” Hollingsworth said. “I’ve enjoyed my role this season. It’s made me a better player by coming off the bench. I understand the game more and adjust to things when I’m asked to go in.”

Hollingsworth, Burdette and the Lady Lions (20-9) open the postseason on Friday as they host Wallace Community College-Selma in an Alabama Community College Conference (ACCC) play-in game at 5:30 p.m. at Tom Drake Coliseum. The winner advances to play Alabama Southern in the ACCC Tournament on March 8 at Lawson State.

Wallace State is seeded 3rd in the North Division. Wallace-Selma (5-24) is the South’s sixth seed.

“I’m ready to see if we have what it takes to get a ring. It’s been a lot of fun to be a part of a 20-win team this season. I didn’t get to experience that in high school,” Hollingsworth said. “We’ve learned a lot as a team and about each other this season, and it would be a perfect ending to get hot and win a ring.”

“For whatever reason, we haven’t shot the ball well lately, but we can turn that around. Once one shot falls, it become contagious across the board,” Burdette said. “We are confident we can make a run through this tournament and get back to the championship game. Our sophomores know what it takes to get there, and they can mentor the freshmen.”

Meanwhile, John Meeks and the Wallace State men hit the road Saturday for their ACCC play-in game. The Lions (13-16) travel to Lurleen B. Wallace Community College (17-13) for a 3 p.m. contest.

Meeks has Wallace State in the postseason for the sixth consecutive season, including leading the program to conference titles in 2012 and 2014.