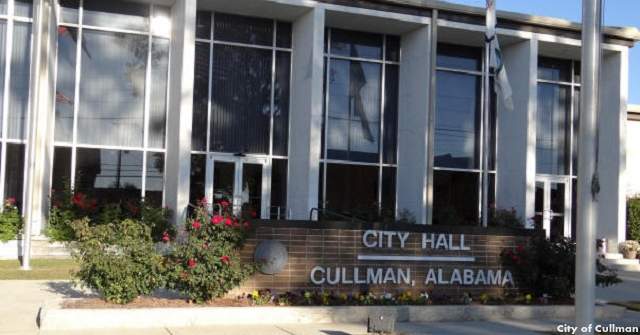 CULLMAN – The City of Cullman moved forward Monday night with the annexation of a little more than 90 acres of land on the city’s southwest side.

During a regular city council meeting, the first reading of ordinance No. 2017 – 09 was on the agenda. The council voted to suspend the rules of procedure so that the annexation could be voted on immediately.  The ordinance called for the annexation of two tracts of land located on Cherokee Avenue Southwest and owned by the City Industrial Development Board. The first tract is 81.79 acres and will be zoned as M-1P Manufacturing District. Tract no. 2 is 9.79 acres and will be zoned as B-2 Business District (Both tracts of land received a favorable recommendation from the City of Cullman Planning Commission).

Gudger shared, "Martha Hayes passed away.  She gave her life to this community, to mental health work, and to everyone who ever came in contact with her; so, I wanted to recognize that here.  Please keep her family in your prayers right now."

Jacobs did not share anything specific, but noted that some economic and retail projects are in the works for the near future around town.

The council considered the following requests.

1. A request from Mary Hovater and Martha Lawrence to discuss the Little Free Pantry project in Cullman.  This project would create a small self-service site in town where people could drop off or take canned goods and hygiene products as opportunities or needs arise.  After discussion, including positive opinions from Cullman City Police Chief Kenny Culpepper and Zoning Board Director Rick Fulmer, a motion to implement the program for a 6-month trial period passed.

2. A request from Street Superintendent Scott Talley to purchase, from a city bid, a 2017 4WD crew cab pickup truck from Mitch Smith Chevrolet in the budgeted amount not to exceed $39,000.  Motion to approve passed.

3. A request from Garage Superintendent Mason Kugler to purchase a mentor touch scout from Mac Tools in the budgeted amount of $2,200.  Motion to approve passed.

4. A request from Traffic Superintendent Jeff Adams to purchase, from a city bid, a 2017 4WD crew cab pickup truck from Mitch Smith Chevrolet in the budgeted amount not to exceed $29,642.  Motion to approve passed.

5. A request from Traffic Superintendent Jeff Adams to purchase 10 preemption systems from Temple, Inc., a sole source provider, in the budgeted amount not to exceed $39,088.  After discussion, a motion passed to put the item back out to bid.

6. A request from Traffic Superintendent Jeff Adams to bid the purchase of a 2010 or newer bucket truck with less than 110,000 miles.  Motion to approve passed.

7. A request from Anthony Smith to grant a variance on his building.  A motion was passed to refer the request to the Zoning Board of Adjustments with a favorable recommendation from the council.

The following resolutions were considered.

1. Resolution No. 2017 – 36 – To enter into a contract with Terracon Consultants, Inc. for testing at the site of the new street facility in the budgeted amount not to exceed $28,000.  Motion to approve passed.

2. Resolution No. 2017 – 37 – To enter into a contract with TTL, Inc. for testing and surveying at the industrial tract on County Road 222 in the budgeted amount not to exceed $7,860.  Motion to approve passed.

3. Resolution No. 2017 – 38 – To authorize the mayor to enter into an Intergovernmental Agreement with the Industrial Development Board of the City of Cullman.  Motion to approve passed.

5. Resolution No. 2017 – 40 – To award the bid for site work at an industrial tract to the lowest responsible bidder, Wiregrass Construction Company, Inc., in the budgeted amount of $329,987.18.  Motion to approve passed.

8. Resolution No. 2017 – 43 – To approve two change orders on the construction of the Cullman Water Facility.  Motion to approve passed.

Four board appointments were approved. Gary Hollingsworth to the Alcohol Review Board and Beth Downes-Johnson, Herbert Arnold and Lona Heatherly to the Cullman City Parks and Recreation Board.

The Cullman City Council meets at Cullman City Hall on the second and fourth Monday evenings of each month at 7 p.m.  The public is invited to attend.