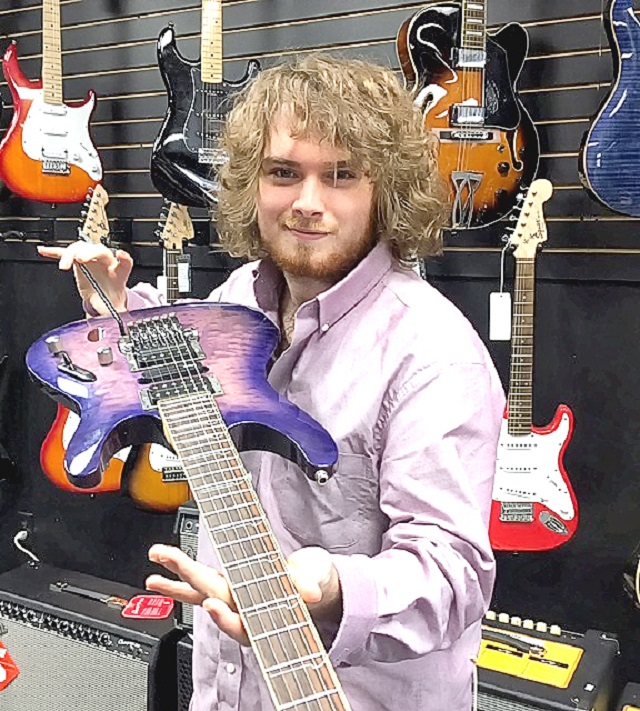 Case Graham having fun at Guitars and More, where he works as an instructor.

CULLMAN – Belmont University in Nashville is a pretty high goal for a teenage amateur guitar picker.  Its music program is considered the best in the South, and in various polls it ranks among the top 10 in the country.  Admission to the program involves academic assessment, an essay and a nerve-wracking audition process; so, it's not for everyone.

But it is for Case Graham, a 21-year old Cullman High School graduate who recently completed two years of fine arts studies at Wallace State.  He has wanted to go to Belmont for years, and in January he will get his chance.

Graham has played guitar for 10 years, and started by accident, literally.  As a child, he enjoyed playing football, but he was sidelined for a season by a broken rib when he was 10 years old.  To give him something else to do, his parents offered to enroll him in music lessons.  He spent a year taking piano lessons, and at 11 years of age he got his hands on a guitar.  Surely the rib was better by then, but football was no longer part of the equation; he was hooked.

At first Graham tried self-study with method books, but it wasn't working.  He admits that he has never been good with books.  He started listening to CDs and heard a song that he remembered from his brief encounter with that ubiquitous elementary school instrument, the recorder.  He dusted off the old recorder sheet music he still had, and soon played his first song, the traditional hymn "When I Survey the Wondrous Cross."

Such a traditional tune probably seems unusual to anyone who knows Graham.  He's a church-going man, but his youthful music tastes were hardly traditional.  Ready to rock, he enrolled in guitar lessons with instructor Barry Yeager, who introduced him first to the almost-required teen guitarist standards "Sweet Home Alabama" and "Smoke on the Water."  The teacher was an unconventional player who made it easy for the student to be unconventional, too.

Today, after 10 years of playing under multiple instructors, Graham still cites Yeager as the main influence on his own guitar style.  He said, "I wouldn't be able to do what I do without Barry."

When Graham was in seventh grade, Cullman Middle School (CMS) Band Director Linda Bean decided to do a set with a theme based on the recently-released video game "Guitar Hero," and recruited the young guitarist and others to make the electric guitar a marching band instrument.  After marching season ended, Bean offered Graham the job of opening concert band performances as a solo player on classical guitar.  He also went on to play in the CMS Jazz Band.

In the 10th grade, after a solo performance in a Cullman High School talent show, he was invited to bring his guitar to the orchestra pit for the school's production of "Annie."  The jazz band took notice, and he played with them for the rest of his high school days.

At the same time, Graham started looking at colleges.  Being a big fan of guitarist Steve Vai, he first looked at Vai's alma mater Berklee College of Music in Boston.  When classmate and fellow guitar player Ben Tankersley started looking at Belmont, though, so did he.  Finding that he liked the degree offerings and the high percentage of graduates working in the field, Graham finished his sophomore year as a dedicated Belmont man.

He knew, though, that his goal was a daunting one.  Belmont has high academic standards and an average ACT score of 26 among incoming students.  Graham says he has never been strong on such standardized tests, and was worried about the academic rigors of the university (lots of those books he says gave him problems), so he applied to Wallace State to help him "ease into college."  He was not only accepted, but also received a two-year fine arts scholarship.  There he studied jazz and classical guitar, and played in the Wallace State Jazz Band.

As Graham was completing his studies there, he began the application process to Belmont.  Shortly after submitting his application and essay, he was notified of his academic acceptance, but was also notified that he would have to audition for the music school.

On Nov. 11, he sat in a practice room at Belmont, running through a last-minute warmup and rehearsal that he described as "awful."  He felt good about his classical guitar renditions of Bach's "Air on the G String" and Mozart's "Turkish March."  The committee, though, was straight-faced and in a hurry to get on to the next audition; Graham really didn't know what to think.

On the Tuesday before Thanksgiving, Graham got his answer.  A letter arrived, welcoming him to Belmont's prestigious music school.  He'll start in January, majoring in performing arts with a concentration in classical guitar.  He thought about studying the business end of the music industry, but decided that his talents outweigh his business sense.

If all goes well, Graham will go on to become a full-time composer and performer.  He enjoys studio work, and foresees a lot of it in his future.  And he's open to the possibility of coming back to an academic setting to teach the next generation of upcoming stars.

While Graham cites Yeager as his main influence, he's eager to thank the other teachers who have helped him along the way.  Todd Graveman taught him electric guitar and music theory, and Emily Jones taught him classical guitar.  Mark Neal was his advisor at Wallace: academically, musically and otherwise.

At the end of the day, what does Graham want to do?

"My goal is to be the best musician I can be, and I always strive to be better.  If I find something I can't do, I try to find a way I can do it."

And he concluded, "…but I still have trouble reading a book."