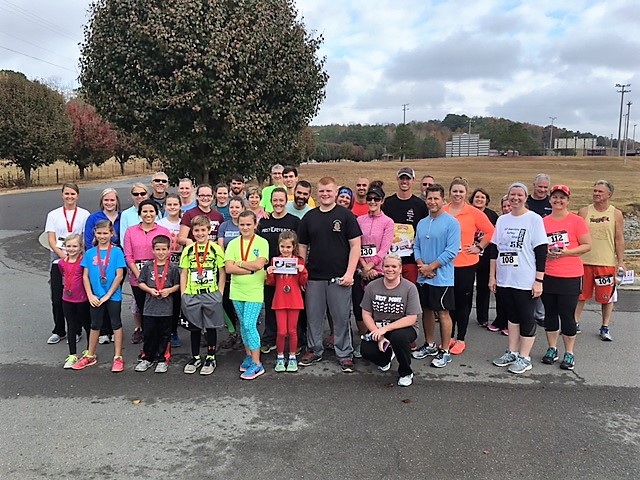 WEST POINT – Local runners and a few not-so-much runners got together Thanksgiving morning to run a challenging course, enjoy a little fellowship and help raise funds for the West Point Elementary School Playground Project.  The Lil’ Warriors 5K Turkey Trot drew 37 participants, a broad spectrum from young to old, from fit to fitness-challenged, from serious runners to those just wanting to support the project.

Among the runners were several representatives of the West Point school system.  Elementary teachers Tammy Simmons and Bethany Dingler ran, along with secretary Anita Smith.  Coach Michael Simmons represented the high school, and principal Heith Yearwood was among the top finishers.  Elementary school principal Angie Yarbrough worked the sign-in table and recorded times on finishing runners.  Six children from the elementary, intermediate and middle schools, those who will be first to benefit from the playground project, also participated.

The 5K/3.2-mile course circled West Point Middle School, beginning with a slight uphill grade from the starting line, and featured substantial elevation changes for a short course, especially in the second half.  Even serious competitive runners in the group found that the route tended to challenge their typical times for races of this length.

After the race, top finishers received medals, as well as donated pumpkin pies.  All elementary, intermediate and middle school students received medals for their participation.  Then numbers were drawn at random from among all runners for more pies and gift cards for RoadID.com.

From participants and sponsors the Turkey Trot raised a combined total of $4,430, bringing the current total to more than $45,000 in-hand for the playground project.  Bates is still waiting for results on grant proposals, and is working with West Point Mayor Kenneth Kilgo on developing a joint-use contract between the Town and school that would allow the application of municipal grants to the project.

A schedule for the start of renovation and construction is still pending, awaiting grant results.

As she watched a group of kids cross the finish line, top female runner Maria Wood was overheard saying to a fellow participant, "They're all winners.  We're all winners, and the children are the big winners."