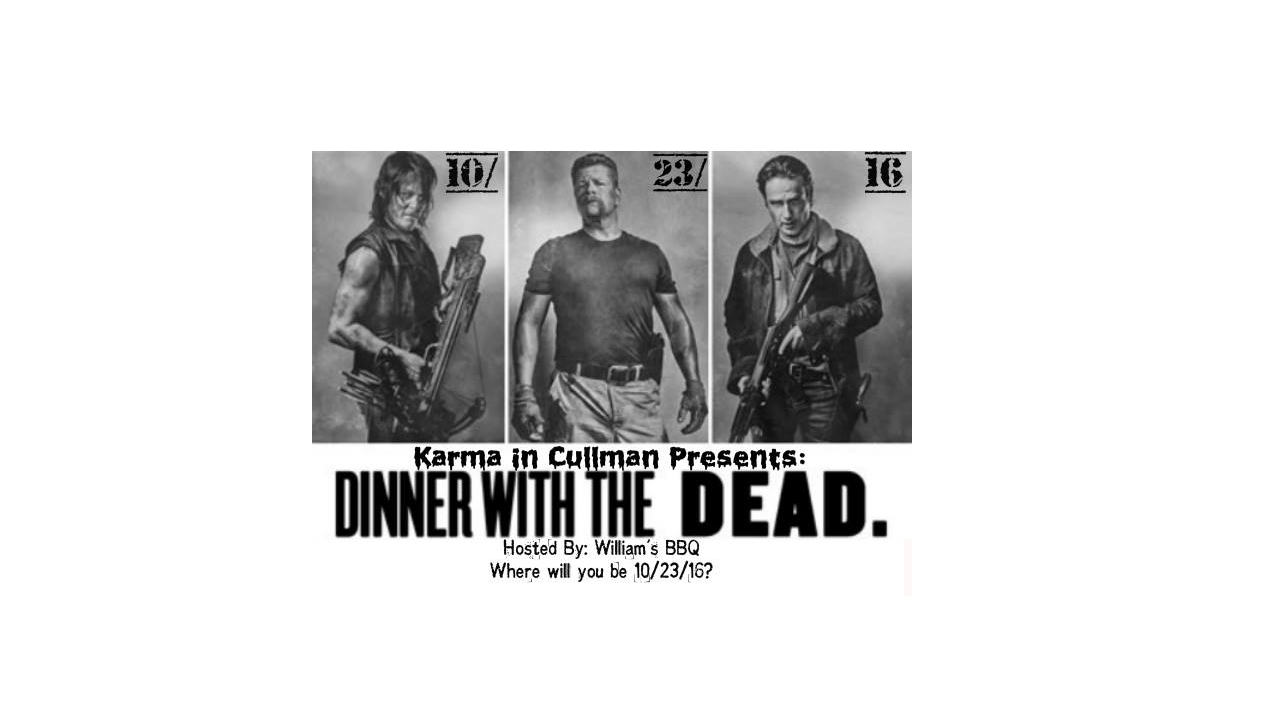 CULLMAN – If you are a fan of the hit AMC show “The Walking Dead,” you have surely been counting down the days until this Sunday’s hotly-anticipated season seven premiere!

For Cullman’s Rachel Bryant, founder of the local group Karma in Cullman, “counting down the days” might be a slight understatement.

“There are three things in my life I am very passionate about, and that is my family, Karma in Cullman and ‘The Walking Dead,’” she laughed.

So what does Karma, an organization that collects clothing, toys and other items and distributes them to those in need, have to do with the super-popular show about zombies?

Well, Bryant has combined two of her passions and will be hosting Dinner with the Dead on Sunday, Oct. 23 from 5-9 p.m. at William’s Barbecue on Highway 31 South.

“Every year Karma in Cullman helps nearly 300 children in Cullman County have Christmas, so to kick off the project we host a fall fundraising event. One year it was a Zombie Fun Run and last year it was our Halloween Town Festival, and after thinking on it I thought, ‘Hey, how awesome would it be to mix two of my most favorite things in one!’ and in that moment, Dinner with the Dead was born,” explained Bryant.

And why will this be event be so awesome?

“If you are a TRUE Walking Dead fan, you will have the time of your life because it will be a night of all things Walking Dead. We start with the menu that is Walking Dead inspired of course. William's will be offering Spaghetti Tuesdays on Sunday in honor of Hershel Greene or maybe (guests) would rather have a little Bob'a'Cue because ‘All those who Arrive will Survive,’ and of course we will also offer chocolate pudding for dessert. We will also have cookies.” Bryant said.

“We will have several photo ops for the guests to take their pictures in front of or with, such as the ‘Don't Open Dead Inside’ doors or ‘Just Look at the Flowers,’ and zombies will be roaming around photo bombing.

“Then we get down to business. We will watch the season six finale to get pumped up for the season seven premiere, and as all of The Walking Dead fandom knows we will lose some very dear characters in a brutal fashion. So we will be filming audience reactions as well,” she explained.

“But the one thing I really think makes it awesome is you get all this for just $12. (For) $12 you are helping children in your community have a great Christmas. It is a win-win, but if that isn't incentive enough, each adult ticket sold will be entered into a drawing for two tickets to the Atlanta Walker Stalker Convention the following weekend (Oct. 28-30). If you haven't heard of Walker Stalker, you are missing out. Just about ALL of the Walking Dead cast will be in attendance there in Atlanta, so this is THE CHANCE to meet your favorite actors IN PERSON.”

Bryant says that people have asked her, “Why are you using ‘The Walking Dead’ as a charity fundraiser? Isn't it dark or wrong?”

She told us, “True fans know that ‘The Walking Dead’ isn't really about the zombies. We watch it for the storyline between the humans. How sometimes it speaks reality about the world we live in. On the show people from different races, religious beliefs, sexes, sexuality, educational backgrounds and financial status find each other and not only become friends but become a family. We watch them fight, cry and yes, die, for those same people they didn't know at the beginning of the show.

“I think that is how we should all be as humans,” Bryant continued. “We should come together as a family and cry for each other, pray for each other, help each other and fight for each other. There may not be zombies walking around the earth chasing us, but every day things just as deadly are. Homelessness, people going without food, kids going without even when the parents are trying their best, sickness, depression and fear…THOSE are the monsters we face every day, and if we can come together as one we could easily kill those monsters or at least help each fight them.

“So that is why we chose to host the Dinner with the Dead. We are trying to help area families have Christmas this year. Is kids not having presents on Christmas morning a tragedy? No, probably not to you, but to that parent who has to see the look of disappointment in their children's eyes, it is the end of the world.

“So I am pleading with you. If you are a Walking Dead fan, come buy a ticket! Join us for an evening of dinner and fellowship with your fellow Walking Dead fans, and of course the show, but more importantly, your ticket purchase will assist us in helping families in Cullman County have Christmas this year; $12 is all it costs for an entire meal, as well as entertainment, photo fun, door prizes and watching the new episode with those who are just excited as you are!  So let’s come together Oct. 23 and change the world for families.”

In addition to the Dinner with the Dead, Karma in Cullman is also hosting the Zombie Apocalypse Supply Run Food Drive from 4-5 p.m. before the dinner begins.

“The same night of the Dinner with the Dead we are having the mother of all food drives. The person bringing the most nonperishable food will also win tickets to Walker Stalker Con in Atlanta the last weekend in October,” said Bryant. “The minimum is 1,500 pounds, but we want (people) to bring as much as they can. We want to encourage (people) to host their own food drives at their schools, churches, workplaces, local stores. We hope to have a great turnout with this project. If we do, we hope to not only help our food pantry, but we will then also help other area food pantries with any extra that we get. Spread the love around- spread the karma.”

Bryant also wants to recognize the staff at William’s Barbecue, who will be volunteering the time for the event.

What: Dinner with the Dead

$5 for kids (Children 10 and younger get a Zombie finger plate (hot dog) fries, drink and dessert)

Tickets: Purchase at William's Barbecue or Karma in Cullman (785 Alabama Highway 157 near the intersection of Highways 69 and 157)