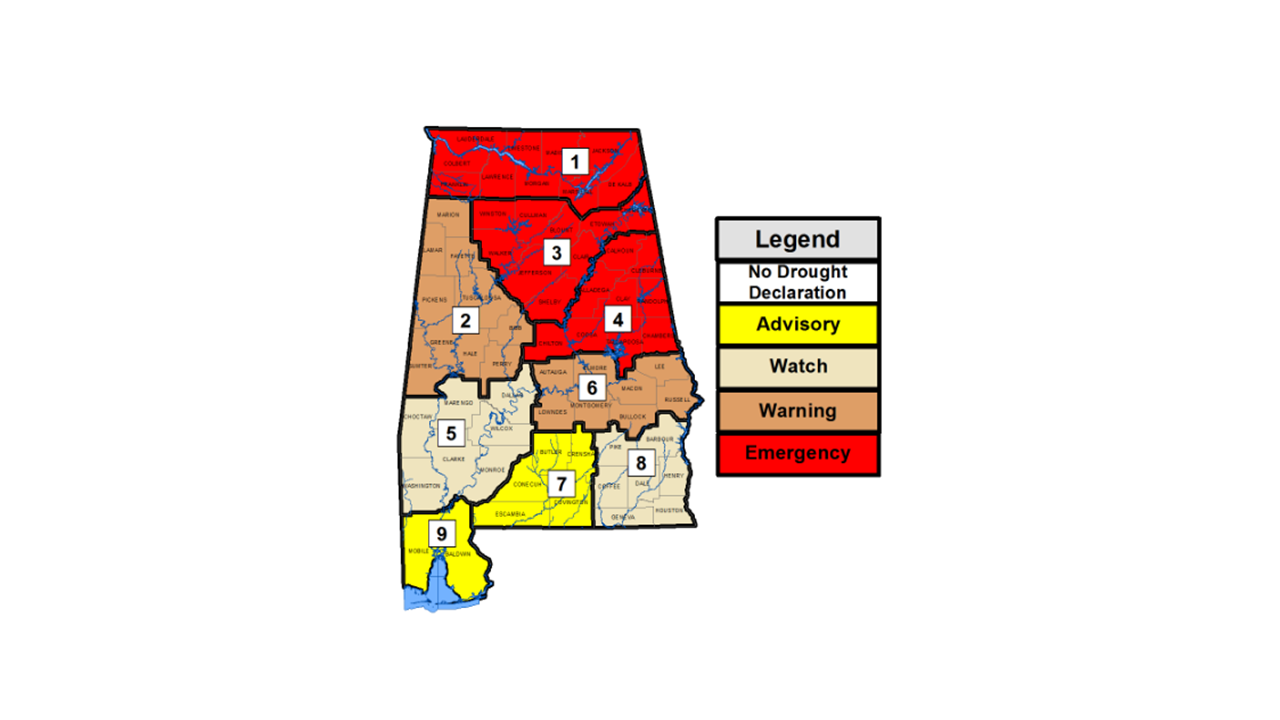 MONTGOMERY– Twenty-eight Alabama counties, including Cullman, have been placed under a drought emergency in the latest Alabama Drought Declaration issued Tuesday afternoon.

The Alabama Department of Economic and Community Affairs’ Office of Water Resources updated the declaration in accordance with the Alabama Drought Planning and Response Act of 2014. The declaration is based on a review of current and anticipated conditions and reported impacts, including rainfall, streamflow, reservoir and groundwater levels. The counties now under the emergency status, the most severe in the drought declaration, are:

Part of that activity is convening regular meetings of the Drought Monitoring and Impact Group which collects and analyzes drought-related data and weather forecasts for updates Alabama drought declaration advisories and changes to Alabama’s input in the weekly U.S. Drought Monitor map. The group of experts includes the state climatologist, representatives from state and federal agencies, reservoir managers, municipal water systems, industry groups and others. The group is currently meeting about every two weeks and held its latest meeting Tuesday afternoon. The group’s next meeting is set for Nov. 1.

“Drought is a slow, silent disaster that can cause water shortages and negatively affect hay, livestock and other industries,” ADECA Director Jim Byard said. “With careful monitoring, we can help to mitigate some of the negative impacts. Our Office of Water Resources will continue to work with the Monitoring and Impact Group and our partners to carefully monitor data, stay in contact with local water systems and issue updated drought declarations as conditions warrant.”

As part of that effort, the drought advisories and a list of drought impacts and water restrictions throughout the state are available and updated constantly on ADECA’s website at www.adeca.alabama.gov/water.

“These advisories are an important part of our state’s drought management process which emphasizes communication and coordination so that the public water systems in the state have the information they need to make decisions necessary for their systems,” OWR Division Chief Brian Atkins said.