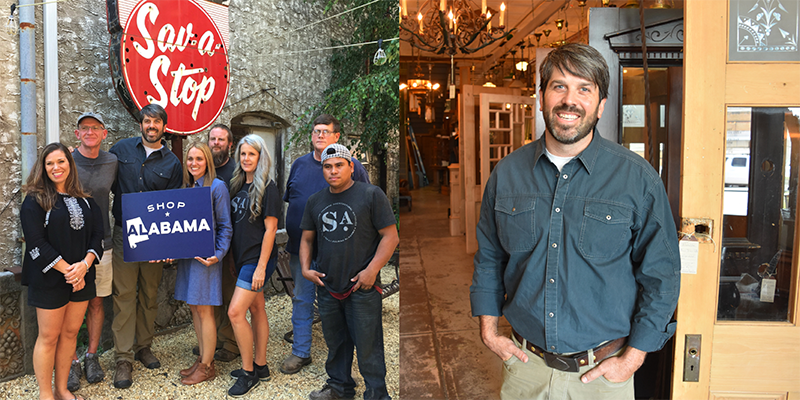 CULLMAN / BIRMINGHAM – Southern Accents was in the architectural antiques and salvage business long before it became popular. Garlan Gudger, who currently owns and operates the family business, says he can’t remember a time when he wasn’t rummaging through salvage.

“My father was a visionary. He and my mother both, and I thank them for dragging me to every antique store and historic structure throughout the Southeast as they raised me,” said Gudger.

Today, Gudger and his Southern Accents team were honored with the Silver Alabama Retailer of the Year Award in the Annual Sales $1 Million to $5 Million category. The entire staff was on hand to accept the award. Gudger closed the business for the day so everyone on his team could attend the luncheon. Southern Accents was one of 13 retail businesses honored as Retailers of the Year by the Alabama Retail Association, in cooperation with the University of Alabama at Birmingham’s Collat School of Business at the Alabama Retail Day luncheon in Birmingham.

“Without my family and team members,” said Gudger, “Southern Accents would not be possible. We are so honored for this opportunity and for such a distinguished award.”

Southern Accents is in the heart of Cullman’s downtown, but had humble beginnings 47 years ago in Garlan Gudger Sr.’s two-car garage. For years, he had been rescuing, collecting and restoring architectural objects from buildings slated to be demolished. It didn’t take long for word to spread of this “garage collection” and the quality of antiques that were showcased.
As the interest in the industry gained momentum, he opened a small shop in north Cullman. Today, the business is one of the largest architectural salvage stores in the country. In recent months, the Southern Accents team also has been hired to design and build sets, using their architectural salvage, for CMT videos, presidential forums, music concerts and New York Fashion Week.

The Alabama Retailer of the Year judges praised Gudger for his “team orientation” and his success in “using 21st century technology to sell 19th century material.” They also gave him high marks for his work to preserve history and invigorate his city’s downtown.

Gudger, who is currently serving his fourth term on Cullman’s City Council, was nominated for the award by fellow Cullman businessman Rob Werner, owner of Werner’s Trading Co.

“Garlan runs a great business, but is also a great guy,” said Werner. “He has played a big role in helping to restore Cullman’s downtown, especially after the April 2011 tornado, but he has also brought a whole lot of new life to the area.”

The past year has been the best to date for Southern Accents in terms of sales and its growing notoriety. The business also expanded by adding a 6,000-square-foot warehouse specifically for its increasingly popular salvage wood. Southern Accents, this year, also was recognized by its local chamber as a Small Business of the Month and received the Spirit of Cullman Award from the city’s tourism department.

The Alabama Retailer of the Year awards, started in 1999, honor retailers who have demonstrated growth, innovation and a commitment to their respective communities.  This year’s winners came from a pool of more than 70 nominees.

“Garlan Gudger is a retailer of the year EVERY year to the Southern Accents customers, its 12 employees and the Cullman community,” said Alabama Retail Association President Rick Brown.